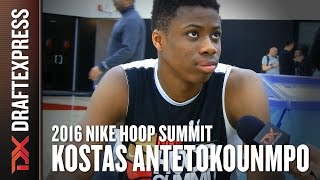 Expected to play a minor role as the 12th man on the roster, Kostas Antetokounmpo received more of an opportunity once power forwards Lauri Markkanen and Thon Maker withdrew from the event, and combo forward Justin Jackson was injured.

Still at an early stage of his development both physically and skill-wise, Antetokounmpo has intriguing tools to build off, standing nearly 6'10 in shoes with a 7'2 wingspan and a frame that should fill out nicely in time.

Offensively, Antetokounmpo mostly fills in the blanks as a secondary option, being a pass-first player who likes to operate off the ball. He showed some potential as a shooter in drills, as the ball comes out of his hand nicely with good rotation, but is far from translating that to game-settings at this stage. His ball-handling skills are very rudimentary, mostly relegating him to straight line drives in transition, but he has some interesting passing ability he displays at times.

Defensively is where Antetokounmpo has much more of an impact at this stage. He has the size and length (but not yet the strength) to defend big men, but is quick enough to get out on the perimeter and defend most forwards and wings, which gives him tremendous versatility on that end of the floor. He's highly instinctive finding blocks and steals, and brings a solid intensity level, even if his lack of strength and experience shows at times.

Heading to college this fall, Antetokounmpo is somewhat of a project, but has very intriguing tools that can be harnessed into something really interesting with the right coaching and skill-development. It will take him time to fill out and figure out his niche on the floor, but is someone NBA teams will be monitoring due to his tools as well as his pedigree as the third Antetokounmpo.
Read full article

The third Atetokounmpo brother isn't quite as big as Giannis, but his frame is more similar to his than that of the shorter, stronger Thanasis. He lacks great bulk at this stage, which was also true of Giannis at the same point, but his 6'9.75 frame and 7-1.75 wingspan give him similarly impressive combination of size and length. He certainly has the tools to play power forward at the college level.
Read full article

Matt Kamalsky
@MKamalsky
Kostas Antetokounmpo is the younger brother of Giannis and Thanasis, following them to the United States after Giannis was drafted by the Bucks, and currently residing in Milwaukee. Kostas will be Portland, though, barring an injury or late roster withdrawal, it is unclear at the moment if he will ultimately participate in the Hoop Summit game itself, as he is designated as the 13th player on the roster. A senior at Dominican in Whitefish Bay, Wisconsin, Antetokounmpo is considering a number of high major offers.

Not all that unlike Giannis at the same stage, he is a late bloomer physically who sprouted up a few inches late in his high school career, and whose defense is currently ahead of his defense. The 6'10 small forward will participate in the practice sessions, giving him a chance to test his length and budding skill set alongside a loaded roster, in a very competitive setting. Considering the amount of NBA teams who will be present in the practice sessions, Kostas can help himself tremendously with a strong showing in the practices.
Read full article