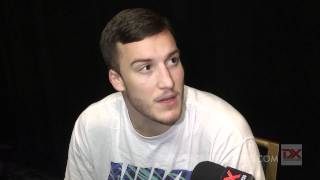 Finding a Niche For: Miles Plumlee

It took four years for Miles Plumlee to develop into the type of player that Duke fans expected him to be, and even then, he played around 20 minutes per game and scored in double figures just eight times all season. Now, as his career has come to a close, it is time to reevaluate Plumlee on the basis of what he showed throughout his time at Duke to determine whether he can find a niche at the NBA level.

Purely from a physical standpoint, Plumlee looks the part of a NBA big man, measured just a hair under seven feet in shoes with a 7'0 wingspan and an outstanding frame. He bulked up to 247-pounds with allegedly only 5% body fat between his junior and senior seasons. While he's a bit mechanical in his movements, he's a very good athlete for his size--mobile, explosive around the basket, and runs the floor well.

Though he had the reputation of playing facing the basket in high school, Plumlee struggled to develop his offensive game and never turned into a legitimate scoring option at Duke. He averaged a pedestrian 6.6 points per game, a similarly mediocre 12.5 per 40 minutes pace adjusted, while claiming just 8.6% of Duke's offensive possessions. He did, however, shoot a career high 61% from the field, being very efficient in the limited role he played offensively.

Plumlee is still very raw around the basket, at his best catching and finishing. Though his footwork is underdeveloped, he looked comfortable executing a few basic-spin and up-and-under moves with his back to the basket and with his right hand. It's not looking very likely that Plumlee will ever develop into a reliable back-to-the-basket threat, however, especially considering his rawness as a senior and his general lack of development up to this point.

Where Plumlee does thrive and where he can clearly contribute in the NBA is with his tenacity around the basket, particularly grabbing offensive rebounds and finishing. He was the third best offensive rebounder per 40 minutes pace adjusted in our database and on film, he looks to have a nose for the ball while playing a relentless and aggressive style of basketball. While he's primarily a positional rebounder, he has solid hands and the strength and athleticism to bring the ball straight up and to finish in traffic.

Outside of his offensive rebounding prowess, the another interesting wrinkle to Plumlee's game are the brief flashes (just six attempts all season) that he has shown as a spot-up shooter from mid-range, particularly given his comfort operating out of the pick-and-roll. He already sets very good screens and rolls hard to the basket, which is an asset given the predominance of pick-and-roll sets in NBA playbooks. His shooting mechanics need significant work, as his shooting touch isn't great and he spots a slow release with a bit of a hitch, but if he is able to develop in this area, he would have a much better chance of carving out a role in an NBA rotation.

Though his offensive game is still a work in a process, Plumlee improved as a defender during his senior year. His lateral quickness is above average for a player his size, and his increased strength and explosiveness could allow him to play solid post defense in a pinch coming off bench in the NBA. He did a much better job of staying out of foul trouble as a senior, averaging a career low 4.3 fouls per 40 minutes pace adjusted in increased minutes and while posting a career best 1.8 blocks per 40 minutes pace adjusted. It should also be mentioned that Plumlee is a good defensive rebounder, ranking 12th amongst college players in our top-100 rankings.

So, is Plumlee an NBA-caliber center? That's something he'll have to convince teams of between now and June 28th. His outstanding physical profile, efficient style of play, rebounding prowess, and flashes of potential that he shows operating out of the pick-and-roll all represent areas where he could contribute on an NBA roster. The fact that he should be able to hold his own in the post on defense certainly doesn't hurt his stock, either.

On the other hand, Plumlee turns 24 this September, has just an average feel for the game, and developed very slowly throughout his college career, leading many to question his mental toughness. His career has been marked by inconsistency and it took him a long time to get comfortable as a player, let alone a leader.

What is clear is that, despite his unimpressive career numbers, Plumlee is an NBA prospect and could get some looks from teams drafting in the second round. If not, he's easily the type of player who could find himself on a team's roster this fall, as there just aren't that many big men around with his physical attributes and rebounding ability.
Read full article

In 2009-2010, Miles Plumlee came off the bench alongside his younger brother Mason Plumlee and played 16 minutes per game during the Blue Devils national championship season. This season, with the departures of starting big men Brian Zoubek and Lance Thomas, the Plumlee brothers should have their chance to earn more minutes and showcase their skills for NBA scouts. While junior Miles Plumlee isn't as physically gifted as his younger brother Mason, he has some talent in his own right, and it will be interesting to see how he is utilized this season on a loaded Duke roster looking to win back to back national titles.

Miles Plumlee is able to swing between the four and the five spots at the college level, where he'll likely spend some time alongside his brother in bigger lineups, as well as some time as the lone big man when Coach K elects to go smaller and play Kyle Singler at the four, in order to make room on the floor for his glut of talented perimeter players. Plumlee has good size at 6'10 and is rumored to have hit the weight room hard in the offseason, adding an extra fifteen pounds to his frame to put him up to 245 pounds. He also is a solid athlete who runs the court well for a guy his size and gets off the floor with good elevation.

While Plumlee came into college with the reputation as more of a perimeter four man who liked to float on the outside and was a bit afraid to bang inside, he's really managed to turn that around after his first two seasons at Duke. The 22 year-old junior's increased strength and toughness served him well last season as he averaged an impressive 12.2 rebounds per forty minutes pace adjusted, up from the 8.2 he averaged as a freshman.

Meanwhile as a shooter, Plumlee has struggled a bit, making just 5 of the 20 jump shots he attempted last season. He made some improvement from his freshman to sophomore season, though, increasing his percentages from the field and from the free throw line. He has a fairly soft touch and decent release, but he has a bit of a hitch in it though, and he doesn't always look confident shooting the ball, maybe party because that wasn't a focus of his role on the team last season. Becoming more reliable on open jumpers out to about 17 feet would serve him well going forward.

In the post, Plumlee isn't really a player that the Blue Devils have looked to dump the ball into a whole lot. He prefers to turn to his left shoulder or face up after catching the ball with his back to the basket, and he doesn't seem as comfortable turning to his right shoulder or using his left hand. He may have more opportunities to showcase his post game this season, so that will be something to keep an eye on,

Defensively, Plumlee's strength, toughness, and elevation help him defend in the basket area, but he lacks the lateral quickness to defend dribble penetration and cover big men who operate more on the perimeter. He also has trouble playing hard without fouling, as evidenced by the fact that he was the 4th most foul-prone player in our database last season, averaging 6.4 fouls per forty minutes.

In terms of his pro potential, Plumlee is a guy who has some things going for him with his size, mobility, and the fact that he's playing for a coach who demands energy and toughness at all times. So far, he hasn't had much opportunity to show all that he's capable of, but he'll have two more seasons at Duke to work on his overall game and display that he has ability to fill a role at the next level.
Read full article