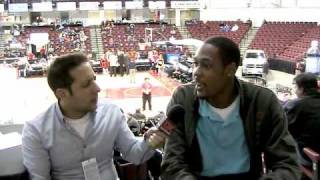 Richard Walker
@DraftExpress
The NCAA's all-time leading shotblocker, Mickell Gladness, sits down to discuss a variety of issues, including what it's like to be a backup in the D-League, his team's extensive cooperation with the Houston Rockets, what it's like to realize that he's not an immediate NBA prospect, and much more.

Joseph Treutlein
@DraftExpress
Anytime you shatter David Robinsons all-time record for blocked shots in a single game (with 16 last year against Texas Southern), youre going to get a look from the NBA. And thats exactly what Gladness has been getting all season long, if only out of intrigue with his size, physical tools and defensive ability.

Were talking about a 6-11 beanpole with freakishly long arms, big hands and some of the skinniest legs youll find anywhere around. Hes quick off his feet and has good all-around mobility, although his athleticism is severely hampered by his lack of strength and conditioning.

Gladness led the NCAA in blocks per game last year, with 6.1, and 7.9 per-40 minutes pace adjusted. This year his averages have dropped to 5.8 per-40, as the word must have seemingly gotten out, and you clearly see slashers doing their best not to challenge him in the lane as much this season.

As a man to man defender, Gladness is frail, but still capable of absolutely wrapping up his matchup with his ridiculous wingspan, looking patient not biting for fakes, and showing tremendous timing to swat balls away once they finally go up in the air. He is almost just as good rotating over from the weak-side to contest shots as well, showing terrific recovery speed and being capable of challenging multiple shots in a single possession due to the quickness in which he gets off his feet. His instincts in this area are for real, regardless of the level he competes against, and he alters just as many shots as he blocks because of his imposing combination of height and length.

Playing in the SWAC, Gladness is clearly picking up a lot of bad habits, though. He basically camps out underneath the rim in order to lock down the paint, contesting anything and everything that comes his way, but not really playing anywhere near the type of team defense hed be expected to against serious competition. He barely shows on screens, and sometimes does not even bother joining his teammates on the offensive end after throwing an outlet pass, because of the extreme up-tempo nature of the league. He seems to struggle going up against stronger big men, as hes easily posted up, and clearly lets players get deep position on him, thinking hell be able to compensate by meeting them at the rim once they go up for their shot. Until he puts on some serious weight, its going to be difficult to envision him playing any type of role at a high level.

Offensively, Gladness is a work in progress, to say the least. He rotates between barely even making it up the floor for his team (partially due to conditioning issues), to forcing the issue badly when he gets the ball in the paint. He struggles to hold his spot on the block, and thus has a tendency to settle for terrible shots, really not seeming to know his limitations on this end of the floor. We see some flashes of a turnaround jumper or a jump-hook at times, but everything is a struggle for him at this point because of his incredible lack of strength. His offense therefore looks rushed, similar to the chaotic way his entire team plays. He does seem to be making some progress in this area, though, as hes averaging nearly 17 points per game over his teams last four games. Well have to see how this trend continues until the end of the season.

In order to not be labeled a one-dimensional shot-blocker, players like Gladness typically need to bring something extra to the floor in order to hold the interest of NBA scouts. He seems to be a pretty team oriented player, looking very active fighting for rebounds and loose balls, and passing the ball reasonably well out of the post. He would be well served to add something resembling a mid-range jumper, as his 68% from the free throw line indicates that he has some touch from this area. His jump-shot does not look good in the instances that he we did see him decide to step out, though. Gladness is a decent rebounder as well, but again, his lack of strength limits his effectiveness in this area.

All in all, Gladness is someone that NBA teams will want to have a look at, as his combination of physical tools and shot-blocking instincts are fairly hard to come by, and they will likely want to evaluate just how much upside he has skill-wise, and especially physically. He only averaged 2.8 points per game (on 38% shooting) in Junior College three years ago, so its pretty obvious that hes just scraping the surface on his true potential at the moment. He looks like a perfect candidate to invite to Portsmouth for a first glance, and will probably get his fair share of workouts as well.
Read full article