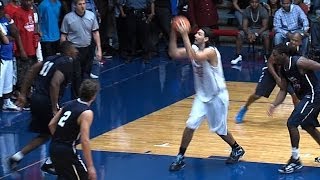 Luis Fernández
@DraftExpress
Luis Scola couldnt provide his usual offensive punch against Panathinaikos to lead his team past the semifinal. He was manhandled by a great individual and team defense, while he greatly suffered from his teams global offensive collapse. Hes still arguably the best offensive post player in Europe, and likely a very productive player in the NBA whenever he manages to go there.
Read full article

2007 Kings Cup: A Look at the Oldies (Drafted Players/Free Agents)

Luis Fernández
@DraftExpress
We saw the same old Luis Scola here. He remains a major scoring force within 16 feet from the basket. His low post game is a thing of beauty, where he shows impressive footwork and footspeed while an incredible knack to find the way to the basket. He also looked reliable with the mid-range jumper as usual, while hes probably the best frontcourt player in Europe in terms of moving off the ball. However, he didnt enjoy the same magical pick-and-roll connection with Pablo Prigioni that they had showed in the previous edition (leading Tau to a brilliant victory then), as his point guard teammate is not in the same terrific shape he enjoyed last year. Anyway, some punctual moments aside, Scola was almost unstoppable with the ball in his hands, and even was smart feeding his teammates when he was overdefended. He had 23 points, 7 rebounds, 5 assists and 3 steals in the quarterfinal game against Caja San Fernando, but settled for 15 points and 5 rebounds in the semifinal against Real Madrid, suffering from foul trouble.

At this point, its hard to predict if or when Scola will be able to play in the NBA. His high buyout, the apparent lack of interest in him that the San Antonio Spurs show lately and their own reluctance to sell his rights are a difficult equation to sort out.
Read full article

Kristian Hohnjec
@DraftExpress
You keep hearing Scolas name related to the NBA year after year, but he never makes it because of the mammoth buyout Tau Ceramica is asking. Next year could be the year Luis Scola finally steps on the NBA court after being the top player in international basketball for yearsor at least thats how the mantra goes. San Antonio still has his rights, although there have been rumours that they might trade them to another team.

There is nothing new about him this season-- he is still the same scoring machine who torches opponents in the post with his wide array of skills. Scolas presence is crucial as Tau makes another bid at the Euroleague crown.

Standing 6-9, Scola is a solid athlete with good strength and footspeed. He doesnt have great size, nor is he particularly explosive though. Scola is a very intelligent and skilled player with a wide array of low post moves. He is also an above average shooter from mid-range and a good passer.

A solid man-to-man defender, Luis is an average rebounder and below average shot-blocker due to his lack of length and leaping ability.
Read full article

Kristian Hohnjec
@DraftExpress
This was a tough weekend for Luis Scola. Not only did this mean the third time he falls just a bit short of the Euroleague title (after losing 3-2 in the 2001 Finals against Manu Ginobilis Kinder Bologna and last season in the final against Maccabi again), but his father suffered a heart problem while in Prague. Still, Scola led Tau in scoring (17 points) and rebounding (11) against Maccabi, not giving up to what quickly looked like a sure loss for the Spanish team.

With the disappearance of point guard Pablo Prigioni (shrunk by the very intense defense delivered by Solomon and Sharp), Scola couldnt take advantage of the multiple scoring opportunities that the pick and roll plays with his countryman provides him. Maccabi executed an awesome defensive game-plan all over the court, not allowing spaces and being particularly intimidating near the basket. Therefore, Scolas production off his excellent off-the-ball skills was dramatically reduced, being forced to play more one-on-one situations that anyway werent as effective as usual, having to battle against a surprisingly aggressive frontcourt.

Scola is a very smart player, a guy with incredible intuition to play the game, and if foul trouble doesnt bother him (he played 39 minutes), he usually finds a way to get points. This time, he managed to keep his production up thanks to his unusual activity on the offensive glass (and Maccabis own weakness securing their own rebounds), which provided him with several second-chance points off his 7 offensive captures.

Despite the delicate health situation of his father, Scola played the meaningless game for third place. There isnt much to say about it really. It was more of a conventional game, with Prigioni back in his distributing role, although Scola shared the scoring duties in the paint with Predrag Drobnjak, settling for only 11 points.

The feeling in Spain is that Scola will finally leave for the NBA this summer. His contract apparently runs out in 2007, and Tau will likely prefer to cash in this year before losing him for nothing the following one.
Read full article

Luis Fernández
@DraftExpress
By now, everybody should be aware that Luis Scola is one of the top power forwards in Europe, indeed one of the better players still not in the NBA. That seemed to be his destiny this past summer, but contract issues didnt allow him to sign with the San Antonio Spurs, the team that still holds his draft rights. On the contrary, he had to see how his countryman and former teammate Fabricio Oberto took his place instead.

Frustration might be the reason why Scola has shown a questionable attitude on the court during the season, particularly on the defensive end. However everything changed once the Cup started. Scola is a natural-born winner, a fighter, and he delivered the best of himself to help Tau get the final victory.

Not enjoying the most brilliant offensive display of his career, Luis delivered aggressiveness by playing serious defense and capturing rebounds, and got over his offensive individualism to pass the ball and became a true leader on the court for his teammates.

But of course, his scoring was there too. He formed a lethal duo with Pablo Prigioni, showing that hes one of the best players you will find moving without the ball in pick and roll situations (which has become the go-to play of the team). And although being less prolific, he once again displayed his excellent low post game.

His future is pretty much still in the air. Tau might be more willing to let him go (always with economic compensation in mind) this coming summer, once the team secures its participation in the next three Euroleague editions with a solid finish this season. However, thats not a give in at all, and it still remains to be seen how much the Spurs really want him, as he wouldnt be cheap at all.
Read full article

Luis Fernández
@DraftExpress
Everything leads us to believe that this will be Luis Scola's last season in Europe, with the San Antonio Spurs finally in the right situation to spend some of its money this summer on the player who they still hold the rights to , another jackpot for this franchise in the draft, and one of the best players outside the NBA in his position, no question about it.

He didn't show his best face in this King's Cup, though. While he did punish his rivals from the low post, destroying zone defenses with his mid-ranger jumpers (it still surprises how easily he manages to get open looks in the middle of a zone) and effectively passing the ball as rivals defenses were quite focused on him.

On the other hand, he was another victim of Real Madrid's tenacity on the offensive glass, getting just three rebounds in the semifinals, frustrating Tau Vitoria's hopes of repeating last year's title.
Read full article

Checking Stock at the King's Cup

Luis Fernández
@DraftExpress
The best player on the team that won the tournament. The Spurs draftee scored from the paint at will all weekend long. Giving an exhibition of his impressive paint game, he became a scoring machine. He particularly excelled during the semi-finals, scoring 22 points and grabbing 9 rebounds in the first half of the game to almost finish off the game early on. The opposite team, the host Caja San Fernando, started the game with a man to man defense that Scola burned with his post movements. Later, they changed to a zone defense, but Luis found a way to receive the ball and score several mid-range jumpers that eliminated any hope of victory of the local team. Another 22 points on great percentages in the final sealed the win for Tau Vitoria in this Cup. Despite some defensive flaws, Scola has proved again to be ready for the NBA, but are the Spurs ready for him? With Malik Rose under contract for a long time and their cap space likely to be spent on his countryman Ginobili, the swingman Turkoglu and other positions in more desperate need of help, it looks like he might have to stick around at least another year. Anyway, the Spurs know they have yet another very nice player foreign player in the Argentinian whenever they are ready for him.
Read full article