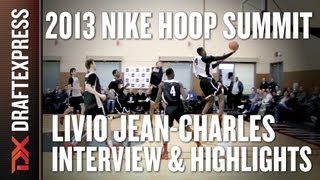 Stealing the show at the 2013 Nike Hoop Summit, Livio Jean-Charles did more to help himself over the course of the week than any player in attendance, leading to his declaration for the 2013 NBA Draft. The French forward had already generated some buzz among NBA scouts with his consistent play in practice, but exploded for 27 points and 13 rebounds against the USA Junior National Select Team on game day. Both of those totals rank in the top-7 in the 16-year history of the event.

Jean-Charles began the week doing the same things that ultimately led to his historic performance in the game; moving well without the ball, running the floor tirelessly, finishing at the rim, and making the most of his athleticism and 7'2 wingspan by playing with great intensity on both ends of the floor. Standing out in practice with his ability to do a lot of the little things NBA scouts look for in a combo forward, Jean-Charles showed promising potential as a roleplayer.

Earning a spot in the starting lineup for Roy Rana's World Select Team after sitting out briefly with an injury earlier in the week, Jean-Charles did most of his damage on the offensive end by crashing the glass and as the screen setter on the pick and roll. Finishing the game shooting 10-13 from the field and 7-10 from the line, Jean-Charles played within himself while displaying good touch and patience around the rim.

Defensively, Jean-Charles did a terrific job containing dribble penetration and challenging shots around the rim. Not a freak athlete, the 19-year old has good speed, and combined with his length and motor, showed the ability to defend both forward positions. Blocking a couple of dunks over the course of the week and a few on game day, Jean-Charles is a smart defender who could become an even more versatile on that end of the floor as his frame improves.

Moving forward, there are three areas of his game that will dictate what kind of player Jean-Charles can be down the road and likely define his NBA position: his physical strength, range on his jumper, and ball-handling ability. Possessing passable size for a power forward and very good length, Jean-Charles has gained some weight in recent years, but at 217 pounds, will need to continue getting stronger to better defend the post at the NBA level. A very reliable midrange shooter, albeit with a very long, unorthodox release, and sound decision-maker, Jean-Charles's ability to handle the ball and make a standstill 3-pointer will determine whether he can become as versatile on the offensive end as he is on the defensive end.

A prospect we've covered a extensively during his time at INSEP and playing for the French Junior National Teams in FIBA competition, Jean-Charles certainly showcased his strengths as a prospect with his showing at the Nike Hoop Summit. Able to make the leap to the NBA after this season or a few years down the road according to his representatives, Jean-Charles is in a very flexible situation. Averaging 3.1 points over 14.3 minutes per-game playing for ASVEL in Pro A, a team could opt to draft him and allow him to gain experience playing a bigger role at the club level or draft him and bring him over immediately to more closely steer his development.
Read full article

Matt Williams
@DraftExpress
Livio Jean-Charles has also made a consistent impact in competitive action. A 6'9 tweener small forward/power forward, Jean-Charles doesn't have a polished perimeter skill set, but his athleticism and hustle allows him to make plays in transition and on the offensive glass. He made a couple of very impressive passes today, hit a few midrange shots, and was the target of a number of lobs. He also played solid defense, using his 7'2 wingspan and athleticism to keep his man out of the lane and protect the rim in help defense. Currently a starter for ASVEL in France, he appears to have plenty of role-player potential, even if he remains a bit limited as a shooter and ball-handler. Adding range to his jumper will be key for him as he continues his transition to playing out on the perimeter full time.
Read full article

Jonathan Givony
@DraftExpress
The leading scorer of the defending NIJT-champion INSEP squad, Livio Jean-Charles didn't look significantly different than he did the last two times we saw him in Paris and Belgrade.

Standing around 6-8, with a decent frame looking a bit more toned these days, Jean-Charles serves as INSEP's starting power forward, even if he may lack some size for this position long-term.

Offensively, most of his touches come in transition, cutting off the ball and crashing the offensive glass. In the half-court, INSEP likes to get him the ball in the mid-post, where he can use his strong first step to overpower his man off a single dribble and finish effectively around the basket. Somewhat limited when stepping out further onto the perimeter, Jean-Charles is not a great ball-handler and sports a very ugly looking jumper both with his feet set and particularly off the dribble.

This might be the main thing holding him back long-term as even though his future seems to be on the wing, he doesn't possess a very high skill-level at this stage, being mostly relegated to hustle plays around the rim.

Nevertheless, Jean-Charles is a very effective player at this level, as he not only has a big motor, but is also a smart, unselfish player who moves the ball very well in his team's half-court offense.

Defensively, he's versatile enough to guard multiple positions, and puts a great effort in, looking extremely active at all times. With that said, there are some questions about whether he possesses the size and bulk to defend high-level power forwards down the road.
Read full article

Jonathan Givony
@DraftExpress
The MVP of the tournament, 16-year-old Livio Jean-Charles, had a more consistent showing in Paris than when we last saw him in Belgrade back in February.

Standing 6-8, but extremely underdeveloped physically, Jean-Charles is stuck between forward positions at the moment. His future will likely be on the perimeter.

Offensively, he's a fairly raw player, scoring most of his baskets in transition and off cuts to the basket, where he can take advantage of his athleticism. He also has nice hands and a solid feel for the game, and can knock down the occasional mid-range jumper. He likes to post up a bit, and he found some success doing so despite his lack of strength. He's a solid passer and clearly a team player, comfortably contributing in a variety of areas without ever really standing out. Defensively, he plays hard and has nice tools to work with. He looks like a fairly well-coached player thus far.

Jean-Charles will need to work on his perimeter skills significantly over the next few years, but he could become a very interesting prospect if he's able to do so. His ball handling skills are fairly crude at this point, and he doesn't look very comfortable shooting from outside of 15 feet either. He only knocked down four of 14 attempts from beyond the arc in nine NIJT games in Paris and Belgrade. He does have potential, though, and he won't turn 17 until November. Time is clearly on his side.
Read full article