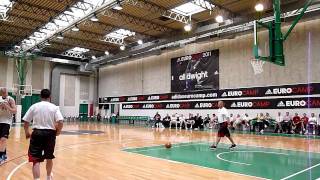 In the afternoon, he worked out for the evaluators at the camp and it was by far the best workout the camp saw. If you'll recall, Biyombo and Monteijunas worked out yesterday and struggled badly. Monteijunas will work out again on day three.

Kenny Atkinson of the New York Knicks ran the workout and you could tell the difference in format when the workout was run by an experienced NBA assistant coach alongside other players, as opposed to the other one-on-zero settings that so ill-suited the players.

Atkinson ran Bertans, his brother Dairis Bertans and Janis Strelnieks through drills exhibiting Bertans' impressive size, skill-level and athleticism. He looked very agile running the court for a 6-10 player and showed a very smooth jumper. He also dunked with ease, his wrist appearing well above the rim when he flushed the ball.

All-in-all, Bertans left talent evaluators giddy for the evening All-star game as word was spreading he would play.

Alas, he did play and he looked rather pedestrian in the five-on-five setting. He finished with 7 points on a paltry 3/13 shooting display that included a missed dunk and having gotten blocked twice. He also had a couple unsightly turnovers.

When all is said and done Bertans probably broke even today. He's one of the youngest prospects at the camp at age 18 and clearly one of the most talented. Unless he finds a NBA team that will guarantee selecting him in the first round by the early-entry pullout deadline (4:59 EST, June 13th) he will withdraw his name from the draft and try again next year or beyond.

Considering the excellent situation he's in in Slovenia, and the fact that he'll be playing with the Latvian U-19 national team in the World Championships in his hometown of Riga this July, Bertans is right not to be in any rush to stay in the draft unless he finds a perfect situation for his long-term development.
Read full article

One of the most intriguing players for the World team at the 2011 Nike Hoop Summit was Latvian small forward Davis Bertans, who at 6'10, impressed immediately with his smooth stroke from the perimeter. He's a pure shooter with deep range and confidence who showed the ability to knock down shots running off screens or spotting up, and also showed some flashes creating off the dribble.

Bertans has a quick release, and shows a knack for using his size to create space to get his shot off with his pull-up jumper. He went cold in the game, shooting 3-10 from the field and 2-6 from 3-point range, but scouts likely saw enough from him in during the practices and scrimmages to realize than he's an outstanding shooter, despite his performance in the game.

Off the dribble, Bertans showed some potential, but he lacks a quick first step or great strength. He was a bit loose with the ball on occasion and turned it over more than you'd like to see over the course of the week. He showed solid court vision and threw some nice passes off his penetration, but tightening up his slashing game and improving his decision-making will help to make him much more efficient.

Part of this will come with added strength, as he has a very narrow frame that makes it difficult for him to play through contact at the moment. This makes sense considering that he grew almost eight inches (20 centimeters) over the last two years, according to what he told us, so he's obviously still growing into his new dimensions. It will be important for him to continue to refine his shot-creating ability so he doesn't get labeled as a one dimensional prospect down the road.

While Bertans clearly isn't a spectacular athlete, he did throw down some pretty impressive dunks during the practice sessions. He moves fluidly enough that he projects to be a more of a true small forward, rather than a player limited to only a stretch-four type role.

Showing the ability to consistently defend small forwards may be his biggest thing he needs to work on moving forward, as he did look to struggle a bit against the athleticism of Team USA. His lateral quickness is just average, and he doesn't have a very long wingspan either at just 6-10, so he must compensate with his effort-level and fundamentals to not become a liability in isolation situations. Part of this will again come with added strength, as it's difficult for him to deal with more physical prospects weighing just 210 pounds at the moment.

Bertans plays for Union Olimpija in Slovenia, a Euroleague team and an organization known for doing an excellent job developing young players. He's already seeing solid playing time there for a player his age, which is a very good sign considering the level of competition he's facing.

While he didn't have an incredibly impressive performance in the actual Hoop Summit game, he'll likely have many NBA scouts tracking his progress over the next few years, as he's clearly a prospect who shows great potential for the future.
Read full article