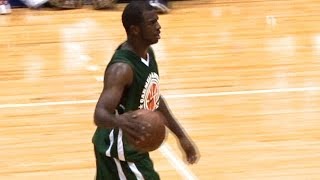 Matt Williams
@DraftExpress
Overview: Likely the best point guard in the NBA already, despite his age. Lightning quick and is almost impossible to stay in front of. Can play above the rim despite his lack of height. Doesnt have an imposing frame, but compensates with great heart and athleticism. Plays bigger than he is. One of the best passers in the game today. Outstanding scorer when needed too. Plays tremendous defense when motivated. Already a franchise player. Garnered first team All-American honors during his sophomore season at Wake Forest. Was obviously a special player from day one with the Demon Deacons. Won the NBA Rookie of the Year Award in 2006. Played in the 2008 All-Star game. Displays great leadership skills for a player his age. Has a chance to become one of the all-time great point guards in the NBA if he continues along the same trajectory.

Offense: One of the top distributors in the League. Gets about half of his offense in pick and roll situations, but is also capable of starting and finishing the break and taking his man one-on-one. Has improved his jump shot dramatically since entering the League. Forces defenders to respect his three point shot, a key to his development. Becoming a very consistent catch and shoot guy. Makes a killing off the dribble. Extremely efficient in general offensively. Impossible to stay in front of and can either pull up or finish at the rim. One of the most creative finishers in the game. Isnt limited by his height unlike most comparably sized players. Runs the pick and roll as well as anybody. Turns the corner and then breaks down the defense with his tremendous ball handling ability. Gets in the lane, draws the defense, and finds his teammates. Does a very good job seeing the floor and reading defenders. Fantastic at controlling tempowhich is a key to New Orleans success. Makes everyone around him considerably better. Does not turn the ball over at all for how much he handles it. Turning into one of the games most dynamic offensive players.

Defense: Very good on this end when he puts his mind to it, considering his limitations. Uses his unbelievable lateral quickness and 6-4 wingspan to dart in front of passes to create turnovers. Displays very good anticipation and quick hands when going for strips and deflections. Tough to get by due to his speed and improved strength. Struggles on the pick and roll, often late getting out and doesnt do a great job fighting through screens. Can get posted up effectively due to his lack of size, or shot over the top of on the perimeter. Solid rebounder for his size and position. Will get anything that bounces long off the rim. Never late to a loose ball either.
Read full article

Strengths
Dynamic, Explosive, Electric, Dominantonly a few of the words used to describe Chris Paul's game. Paul is one of the better all-around PG prospects to come along in the past decade, and there isn't much about his game that isn't a strength.

The first thing you notice about Paul is his explosiveness with the ball. There really isn't anybody that can stop him from getting to the basket, with his dynamite first step and ability to get the ball above the rim before shot blockers can alter it.

Furthering this strength is Paul's ability to recognize offensive opportunities and exploit them. He understands how to get by defenders on the break, and is relentless at pushing the ball and getting to the basket. If he sees a potential help defender slacking, he will be at the rim before that defender realizes what is happening. Paul is a master of things like splitting defenders, and changing pace to gain that miniscule opening he needs.

While he certainly has the open court speed of a TJ Ford, Dee Brown, or Raymond Felton, none of those point guards break down the defense off the dribble and consistently get to the basket as effectively as Chris Paul.

As a floor general, Paul might not quite have the creativity of the truly great pass-first point guards, but he runs an offense effectively and is very efficient with the ball. Paul has incredibly quick hands, as his nearly 2.5/1 assist-to-turnover ratio would indicate. At Wake Forest, Paul ran an offense full of players that needed consistent shots, and always shared the ball quite nicely. He understands tempo, distributes the ball in an intelligent fashion, and always finds the open man.

Some might question why a player of Paul's obvious talents only averaged 15 points per game, and was so inconsistent as a scorer on a night-by-night basis. Rest assured that this is only because of Paul's role as a distributor, and the fact that he played on a team with numerous other capable scorers.

In addition to his ability to break down defenses off the dribble, Paul has developed into a great outside shooter, hitting 47% of his 3-pointers this season. He can score in a variety of ways, whether it set shots from the outside or acrobatic, floating drives from the mid-range.

Paul has developed a reputation as a clutch player, and always steps up against big competition. He scored 50 points in two games against Duke this season, and had 27 against UNC and Raymond Felton early in the ACC slate. Paul seems to understand when his team needs a big scoring performance, or even simply a big basket. He will always step up his scoring output in these situations.

While his team ended up losing, Paul's performance down the stretch against West Virginia in the second round of the NCAA tourney typifies the kind of player that he is. While the Mountaineers kept finding ways to hit big shots, Paul nearly single-handedly matched them, basket for basket, before he fouled out.

Finally, Paul is the consummate competitor on the floor. While this desire to win sometimes causes him to take things too far, he leaves it all out on the court every time, and oftentimes simply wills his team to a victory.

It's hard not to get excited about a player that is so complete in doing what he can to get a win.

Weaknesses
Paul is a remarkably well-rounded point guard and prospect, but there are a few negatives to mention.

With his quick hands and dominant lateral quickness, you would expect Paul to be a dominant defender. However, he is mediocre at best in this area. While he ends up with a lot of steals, he isn't always an aggressive defender, and doesn't eat up opposing ball handlers the way that he should.

Wake Forest was a very poor defensive team this season, and it showed up in the tournament. While some of that falls on Skip Prosser's system and a few of Paul's teammates, Paul's inability to lock up primary ball handlers (go back to that West Virginia game again), is a place to start when discussing the Demon Deacons' defensive woes.

At a generous 6'0, Paul is a bit undersized as a point in the NBA. While his explosiveness more than makes up for it, Paul may have to adjust some of the things he does as far as attacking the basket. He may have trouble guarding some of the bigger point guards in the league as well.

Finally, while it's hard to call a player too competitive, it seems like Paul may have become just that during the ACC slate this past season. He developed a reputation as a guy who is willing to throw a cheap shot, even before the incident in the last game of the regular season where he punched Juilus Hodge below the belt.

Furthermore, there were some late season rumors of locker room unrest at Wake Forest. This is something that NBA teams will probably look into, though it's hard to see a team passing on Paul because of personality issues. He is too dynamic a presence on the floor.

Outlook
Paul is generally considered the number one point guard in the 2005 draft, and it isn't too hard to see why. There really isn't anything he doesn't do well, and his ability to break people down off the dribble is nothing short of spectacular. Unless something drastic happens, he's a top selection on draft night - probably top 3.


Comments
While we have Tony Parker down here as a worst-case, that probably isn't very fair to Parker, who would put up bigger numbers if he wasn't running the show in San Antonio.
Read full article

Jonathan Givony
@DraftExpress
Paul has already solidified himself as a lottery pick and probably even a top 5 pick regardless of what happens in the tournament. Scouts and fans would love to see him prove himself even more by working his magic and taking Wake on his back as deep as he can, just to remind us what an amazing player he is. How far they get will also be a major factor in his decision to declare for the NBA, as an early exit could keep him in school and a final four berth may be enough to get him to declare. The past few weeks have not been easy for Paul, his below the belt shot to Julius Hodge damaged his reputation immensely in the national media and he's no longer looked at as the same golden boy he was before. His suspension from the first game of the ACC tournament led to Wake's defeat in the first round and showed exactly what Paul means to this team. Paul will have to find a good balance between scoring and passing, as he can get passive at times, along with playing the type of perimeter defense he has shown to be capable of at times in his career, but not consistently.
Read full article