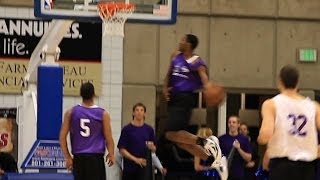 Matt Williams
@DraftExpress
Overview:An extremely young shooting guard who is still trying to solidify himself as an NBA player, but now has a contract that should afford him the opportunity to do so. Possesses nice size, but only decent physical strength for a shooting guard. Has very good overall athleticism. Pretty quick and explosive. Shows nice range on his jump shot. Capable of putting points on the board. Pretty pesky on the defensive end, but lacks experience. Was a highly touted recruit coming out of Skyline (TX), but failed to solidify his stock as a first round pick with his All-Star game performances. Earned a selection early in the second round based on his potential. Has spent time in the NBADL. Not very productive in his time in the NBA. Needed minutes to be able to work through his mistakes, and was never afforded that opportunity in Utah. Becoming more efficient, but still has a ton of room to grow. Showed enough sparks of potential to get Oklahoma City to offer him a 4-year, 15 million contract that was eventually matched by the Jazz. Could be a nice role-player down the road.

Offense: A surprisingly efficient offensive player for his relative experience level, but not very productive. Gets about one-third of his offense as a spot up shooter with another sizeable portion coming from fast breaks and shots coming in the flow of the offense. Has a nice looking left handed stroke that he gets great arc and good elevation on, but seems to shoot on the way down at times. Still refining his jump shot. Shoots the three with respectable consistency. Comes up short on a lot of his jumpers. Not a bad catch and shoot option. Doesnt get many chances to shoot of the dribble, but does so pretty effectively. Doesnt do a lot of driving and could definitely stand to improve his ball-handling skills. Likes to go right when he does put the ball on the floor. Has the quickness to get to the rim, but isnt going to turn the corner on everyone. Uses his athleticism very effectively at the rim. Gets up the floor in a hurry in transition, makes quick cuts to the basket, and loves attack the rim when he receives a pass with a head of steam. Not afraid to go right at the defense. Goes to the line at a decent rate and shoots a decent percentage. Will throw down some impressive dunks. Decent passer. Not as turnover prone as he once was. Still trying to find his identity in Utah. The fact that he is doing so efficiently is a nice bonus. Not really proven as a rotation player in critical moments yet, and has yet to really discover what his niche is as a player.

Defense: Not a bad defender for a player of his experience level. Has the lateral quickness to keep up with most wings and the size and wingspan to contest shots on the perimeter. Will get in a stance and work to keep the ball out of the lane. Relatively capable in one-on-one settings. Doesnt always close out under control. Sells out to try and block shots when he cant get to the ball in time. Displays very active hands, and knows how to force turnovers. Tends to get a little too aggressive when hes trying to come up with a steal. Commits a lot of fouls for a wing. Still very inexperienced. Improving as a rebounder. Needs more NBA experience to begin to utilize his defensive potential, and isnt really trusted enough by the coaching staff to get that yet.
Read full article

Strengths
C.J. Miles doesn't have one specific area that jumps out at you when watching him play. He is a fairly well-rounded player that can do a lot of different things well, and has a nice feel for the game.

The first thing you will notice about Miles is the smooth way that he moves around the floor. While he isn't blessed with a blow-by first step, or rim-rocking explosiveness as a leaper, Miles has very nice body control and is always shifting past defenders. In this area, you might compare him to a Ray Allen.

You might also think of Allen when you see his body type. Miles comes in about 6'5 (maybe 6'6), and has very long arms. Despite having a quite frail upper body, Miles' arms and body control allow him to be a very effective rebounder from the SG position.

Miles' main strength at this point is probably his outside shot. He is a great natural shooter, and has very nice range on his shot. It's his shooting ability that allows him to get by defenders off the dribble, and pull up for midrange jumpers. When Miles does attempt to attack the basket, he has proven reasonably effective at this.

There has been talk of Miles playing some PG if he was to pull out of the draft and attend Texas, and he does have some ball handling ability. While he certainly doesn't have the handle or quickness to ever be considered even a combo guard, he does look comfortable with the ball in his hands, and his size allows him to see the court well.

While it is always hard to project how a high school kid defends on the NBA level, Miles has some decent natural tools here as well. His smooth athleticism and long arms could translate into something successful down the road. Miles appears willing to play hard on the defensive end as well, always something nice to see from a high school kid.

Weaknesses
While Miles may do a lot of things well, a major problem with his game is that he isn't a standout in one specific area.

Most NBA 2-guard prospects that jump straight to the NBA out of high school are superior athletes. Teams are willing to pay a kid to sit on the bench for a couple of years, if he has the raw explosiveness to play the wing position already.

Unfortunately, Miles doesn't have that. While he uses his natural gifts he does have quite well, he doesn't have the athleticism or bulk an NBA SG needs. He might be able to blow past high school kids and elevate for a mid-range jumper, but it's very unlikely that he'll have success at this anytime soon in the NBA. It takes strength and explosiveness to get to the basket, and Miles is simply too lean and lanky at this point.

There are plenty of college prospects that have Miles' athleticism and skill, and have proven themselves against top competition. Simply put, what sets Miles apart?

While Miles does have nice range on his jumper and the ability to hit with a man in his face, he doesn't have textbook form on his shot. His form seems to change with every shot, and while it's impressive that he still has the natural feel to hit at a high clip, Miles still needs to firm up even this most positive aspect of his game.

While Miles might view himself as a combo guard, it's hard to see him playing much PG in the NBA. He doesn't have the first step, quick hands, or court vision to bring the ball up the floor against NBA-quick guards.

Finally, it seems that Miles has a tendency to play passively at times. Throughout his breakout summer at various AAU camps in 2004, people mainly talked about his potential, and not about his actual production. He's just the kind of player that's willing to sit back and wait for the game to come to him. There's nothing wrong with this to a certain point, but sometimes Miles simply isn't assertive enough out there.

Overall, Miles' biggest weakness is his lack of strengths. He looks like a very nice college player, but usually a wing drafted straight out of high school gets the opportunity because he shows the ability to do at least one thing very well. There just isn't anything here that makes you think NBA at this point.

Also on the squad were big-time 2006 targets Darrell Arthur and Bryan Davis, both power forwards.

Miles fared well statistically in the spring all-star games, scoring 13 points (5-10 from the floor, 3-5 from deep) in just 13 minutes in the McDonald's All-American game, while notching 16 points (7-16 from the floor, 0-6 on 3-pointers) and 6 rebounds in 13 minutes at the Jordan Classic.

While he really struggled from the outside in the Jordan Classic (several of the six three-pointers he missed weren't even close), Miles did hit a crucial go-ahead shot to cap off his team's furious comeback. He was fouled in the act of shooting, but still managed to hit the 18-foot fadeaway attempt, with a couple of defenders draped all over him. The free throw gave Miles' gray team their first lead of the night.

Outlook
While CJ Miles has the look of a very nice college player, he isn't even close to being ready for the NBA. He doesn't have the athleticism or the body to be successful in the NBA at the moment. Even as a shooter, which is Miles' billing, he has work to do. Miles would be much better served to attend Texas for 2-3 years, and turn the intriguing aspects of his game into real strengths. CJ Miles clearly has what it takes to get to the NBA someday, but there is simply too much for him to work on, and his physical attributes don't stand out enough to make up for it. We can't see any situation in which an NBA team would use a first round draft pick on him.

Comments
Miles is the best player to come out of Skyline High in Dallas since Larry Johnson more than 15 years ago.