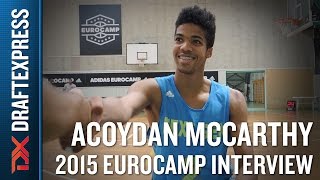 DraftExpress
@DraftExpress
Standing 6'4.5 without shoes at age 16, Acoydan McCarthy is nearly 6'6 in shoes, but still has a lot of room to grow. Real Madrid is going to supposedly give him a run at the point guard position in the future, so it will be interesting to see if the young Spaniard can transition to being a big lead guard at the junior level as his body continues to mature.
Read full article

DraftExpress
@DraftExpress
A player we've seen a number of times over the last few years at various events, Acoydan McCarthy was the other standout for the adidas Next Generation team along with Dzanan Musa. An energetic 6'5 forward with a good feel for the game, McCarthy is still improving his jump shot and is more fluid than explosive, but flashed more consistent shot making ability than we'd seem from him in the past, even if his jump shot is still a work in progress. Finishing with 9 points and 5 rebounds, McCarthy, as he's often been when we've seen him in person, was a key contributor for his team. Competing with Real Madrid at the junior level, the 1999-born swingman will likely make his Spanish Junior National Team debut sooner rather than later as his age group gears up for the 2015 FIBA U16 European Championship.
Read full article

Mike Schmitz
@Mike_Schmitz
Acoydan McCarthy, 6-5, SG, Real Madrid, Spain, 1999
Strengths
-Body continues to fill out. Has a solid physique.
-Has an impressive feel for the game for a player his age
-Naturally talented with the ball in his hands
-Uses both hands off the dribble
-Can make shots off the dribble
-Creates space impressively off the dribble using his body
-Makes creative and accurate passes
-Can play some pick and roll
-Competitive on defense
Weaknesses
-More smooth than explosive
-Decision making still a work in progress. Still figuring out how to utilize his talent efficiently. Goes from blending in to taking bad shots.
-Jumper is still a major work in progress, particularly in catch and shoot situations. Appears to have a hitch in his shot.
OutlookConsidered one of the top talents in his generation in Europe. Hard to argue with that assessment from what he's shown. Made shots off the dribble, but struggled badly at times with feet set. Has a lot of room to continue to improve. Will be interesting to see how much he continues to grow and how his athleticism and outside shot evolves with age and strength.
Read full article

Jonathan Givony
@DraftExpress
Among those impressing were Acoydan McCarthy, the youngest player in attendance. Having made a name for himself at the ACB Minicopa, a youth tournament contested during the ACB Cope del Rey, McCarthy is an impressive player though he just turned 14. Standing 6'4, McCarthy's father is from Ghana and his mother in from the Canary Islands, explaining how he landed on the roster of Gran Canaria's youth teams. Possessing good scoring instincts and a solid feel for the game for a player so young, McCarthy is a player worth tracking as he matures.
Read full article