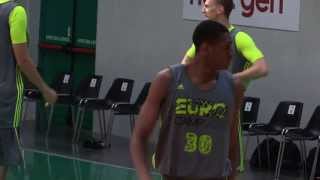 Few players eligible for the 2013 NBA Draft have as unique a background as Vitalis Chikoko. Just three years ago, the then 6'9 center was a complete unknown, dominating local competition playing for the Mbare Heat in Zimbabwe. He was a diamond in the rough uncovered through the efforts of Hoops 4 Hope. Having picked up the game when he outgrew the sport of soccer at 11 years old, Chikoko played in Zimbabwe's modest basketball leagues in his youth, with his only significant international experience coming at the 2008 FIBA Africa U18 Qualifying Round. Able to send a DVD to the front office of BBL club Goettingen with the help and connections of his agent and coach at the time, Chikoko left his home country to start his professional career in Europe at the start of the 2011-2012 season.

Beginning the year playing for ASC 46 Goettingen of the German Regionalliga (4th Division), Chikoko's talent became evident as he averaged a double-double through 18 games among mop up appearances in the first division. Granted the opportunity to start a Bundesliga game in mid-February, Chikoko scored 9 points in 14 minutes against historic German power ALBA Berlin. Seeing minutes on a regular basis for Goettingen the rest of the season, Chikoko posted season highs of 20 points and 11 rebounds and finished in the top-15 in John Hollinger's PER metric. He played especially well in extensive action down the stretch as the team resigned itself to relegation and a last-place finish after being ravaged by injuries and financial issues.

Signing with TBB Trier to stay in the Bundesliga prior to this season, Chikoko came into the season as one of the more intriguing prospects in the 1991-born international group that would be eligible for the 2013 NBA Draft.

Now standing 6'10 with an incredible 7-4 wingspan and a lanky 219 pound frame that remains quite skinny but has progressed steadily since he's arrived in Germany, it isn't hard to see what makes Chikoko an interesting talent on first glance. Possessing good size and length for a big man, the 22 year old is also an impressive athlete, running the floor like a deer and showing good quickness for a center prospect.

On the offensive end, Chikoko's role reflects his lack of high-level experience and limited feel for the game. Finishing this season with an average of 6.3 points in 15.5 minutes per-game, he found the vast majority of his touches in catch and finish situations resulting from his work without the ball in his hands. Asked to set screens, run the floor, and stay active, the big lefty does not have a consistent means to create his own shot or score away from the basket at this point in his career.

Given time and space, Chikoko will attempt an occasional jump shot, but his release point is inconsistent and he's yet to find the type of results that would make him a threat from the perimeter. When he operates in the post, he works hard to try to gain position and will toss in a hook shot from time to time, but his lack of lower body strength and great footwork make it difficult for him to hold position and maintain his balance when making a move. His left-hand dominant interior repertoire only makes it more difficult for him to create inside. Turning the ball over on nearly a quarter of his possessions, Chikoko is still in the early stages of his development as a one-on-one threat.

Nonetheless, he still has some nice moments offensively, thanks in large part to his tremendous foot speed and a budding skill-level that suggests good things to come in the future. His quick feet and huge strides make him a threat in transition when his team looks to run and he's very adept at setting screens and outracing his man to the rim when he rolls. Possessing reliable hands, unlike many young, inexperienced African big men, Chikoko looks to dunk the ball whenever possible. Finishing at a phenomenal 71.9% rate in the paint this season, the young center played efficiently within his role for the most part, though from time to time he surprised defenders by trying to take the ball coast to coast or facing up and using a hesitation move to attack off the dribble, finding mixed results amid intriguing flashes of dribble-drive ability.

Defensively, Chikoko plays with good energy, but struggles mightily to stay out of foul trouble. Averaging 6.8 fouls per-40 minutes pace adjusted, up from the 5.6 he posted as a rookie last season, his lack of discipline defending the interior is a limiting factor on his development. Lacking great strength and possessing questionable fundamentals, Chikoko has a hard time handling strong post scorers on occasion and is too quick to use his hands.

Compounding his struggles, Chikoko's took a step back as a rebounder this season. After averaging a tremendous 12.1 rebounds per-40 minutes pace adjusted last season, he pulled down just 7.6 this year. Despite his tremendous physical profile, he does not always box out well or pursue the ball as instinctively as one would hope.

Where Chikoko does show promise defensively is as a shot blocker and pick and roll defender. His length and ability to cover ground quickly allow him to come up with some impressive rejections defending on the ball, off the ball, and in transition. He makes some impressive rotations recovering to the block from the perimeter as well, and with further experience and improve physical strength, has plenty of potential on this end of the floor.

Potential is a key word when discussing Chikoko, as his experience as a professional doesn't match up with his age compared to his peers. Considering that he's already 22 years old, teams will question just how much he can improve, though the development he's shown physically and skill-wise since arriving in Germany seems to indicate that he is still very early in his learning curve. Lauded for his intangibles and work ethic by coaches and teammates alike, Chikoko is a ways away from being able to contribute at the NBA level, especially with his deficiencies on the glass and in terms of physical strength. Nevertheless, he provides enough flashes and has enough tools that with a few strong workouts, a team looking to draft and stash certainly could take a chance on him late in the draft.

Chikoko competed at the adidas EuroCamp this past week and found mostly mixed results, as the lack of structure combined with his limited experience and average skill-level made for a very up and down showing. While he showed some interesting flashes thanks to his length and athleticism, he also showed a distinct lack of discipline sliding out to the perimeter and heaving up some very questionable jump-shots. Still a few years away from being able to compete at the highest levels of Europe, let alone think about the NBA, Chikoko is a long-term project with unique physical attributes that will need plenty of time and hard work, but could certainly develop into an interesting player down the road.
Read full article