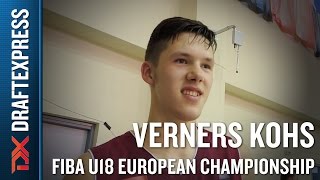 Matt Williams
@DraftExpress
Latvian sharpshooter Verners Kohs emerged as a prospect with a tremendous showing at the 2015 FIBA U18 European Championship where he averaged 14.4 points over just 20.5 minutes per game.  After signing with CAI Zaragoza in Spain and not playing particularly well in limited minutes for their second team in the Spanish Third Division, Kohs moved to Get Better Academy, a team in the Czech Second Division, where he averaged 13 points and 4.3 rebounds per game this season.  After a nice showing at least year's Eurocamp, as well as at the Catalyst Pro Day in Los Angeles last week, Kohs is a player scouts will have an eye out for here as he's spent the season in relative anonymity. Unlike most international prospects, Kohs isn't signed to any long-term contracts and has no buyout to deal with, making him a potential option as a two-way contract player to stash in the D-League next year.
Read full article

DraftExpress
@DraftExpress
The breakout star of last year's FIBA U18 European Championship where he led the competition averaging 28.3 points per 40 minutes, Verners Kohs struggled in his first season outside of his native Latvia averaging 4.1 points per while playing in Zaragoza's 2nd team, El Olivar in the Spanish 3rd Division. A terrific set shooter with a quick release, Kohs wasn't particularly effective for long stretches even in the third division, and would benefit immensely from a bounce back performance here to prove his outstanding performance last summer was not a flash in the pan.
Read full article

Strengths:
-Excellent size at 6-9. Solid frame that will continue to fill out nicely
-Solid athlete. Can play above the rim a bit.
-Tremendous outside shooter. Hit 46% of his 3-point attempts on a huge volume of attempts (12 per-40)
-Very compact and consistent stroke. Great follow-through
-Extremely reliable with feet set.
-Not just a one-dimensional spot-shooter. Moves off the ball intelligently. Can come off screens. Attacks closeouts. Plays some pick and roll. Posts up smaller players
-Strong feel for the game. Doesn't force the issue, even when he's on fire. Makes extra pass. Finds open man
-Can attack a closeout and get to the basket. Even plays above the rim a bit
-Makes turnaround jumpers in the post. Will hit an occasional floater or pull-up jumper. Has tremendous touch overall.

Weaknesses:
-Runs a little bit funny
-Needs to continue to improve ball-handling ability
-Dips the ball upon the catch, slowing down the quickness of his release somewhat.
-Very poor rebounder for position. 3.7 per-40 at U18s.
-Lacks a degree of toughness
-What position does he guard long term? Is he quick enough to defend small forwards? Is he big, strong and tough enough to defend power forwards?

Outlook: The tournament's best scorer at nearly 30 points per-40, one of the ten best offensive performances in the history of the tournament. Somehow shockingly came off the bench the entire time, and only played 20 minutes per game. Big combo forward somewhat stuck between positions. Has a lot of intriguing attributes though, and with the NBA's hyper-focus on outside shooting, will absolutely get looks as a niche prospect.
Read full article

DraftExpress
@DraftExpress
An interview with 6-9 Latvian Small Forward Verners Kohs at the 2015 FIBA U18 European Championship in Volos, Greece.