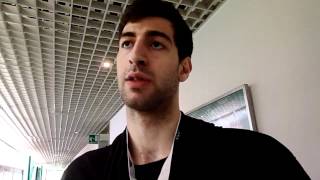 DraftExpress
@DraftExpress
-Tornike Shengelia finished second in the camp's MVP voting, and was named the top power forward at this year's event. Shengelia may not be a physical freak, or an elite athlete, but his solid speed, toughness, and ability to use his strength in traffic give him excellent mismatch potential at the power forward spot. Shengelia had a number of dunks in traffic here among other impressive moments, and was all business from the moment he stepped on the floor on day one.

Offensively, Shengelia uses terrific pivot moves and straight line drives to create for himself off the dribble. He has terrific footwork in the post and is a savvy passer as well, possessing a nice feel for the game. His outside shot is a work in progress, but he shot the ball well in Treviso. One of the true professionals in this group, Shengelia's most promising moments came defensively, where he played better than he did earlier this season in Charleroi. That's a significant step towards defining his position at the NBA level and moving away from being labeled as a tweener. The Georgia native may need to improve his rebounding ability and continue making strides as a shooter and on defense to reach his full potential, but was on the the standouts of this year's EUROCAMP.

We were able to catch up with Shengelia, who intends to stay in the 2012 NBA Draft, on day two.

DraftExpress
@DraftExpress
One of the most known commodities in attendance, Tornike Shengelia played up to his reputation. His outside shot was not falling, but he was extremely aggressive attacking the rim, showing the ability to put the ball on the floor and beat his man of the dribble. He didn't always finish around the basket, but is clearly one of the more assertive and experienced players here. He finished with 9 points on 3/7 shooting and pulled down a game high 5 rebounds.
Read full article

After a monumental 2011 NBA draft for international prospectsfeaturing four players selected with the first seven picks-- the 2011-2012 season has been uncommonly quiet thus far for young players in Europe.

One player who has been performing much better than expected is 1991-born Tornike Shengelia, a 6-9 combo forward who saw consistent playing time in the Euroleague with Belgian club Spirou Basket Charleroi.

Shengelia, the son of a 6-11 national team player, left his native country of Georgia already at the age 16, signing in Spain with Pamesa Valencia. After three seasons developing there, he moved to Belgium in the summer of 2010, where he was signed by Charleroi and loaned for the season to nearby Verviers-Pepinster in the first division.

Despite not being invited to the EuroCamp in Treviso in June, Shengelia had arguably the best summer of any young player in Europe with his national team. First he won the Division B Under-20 European Championships in Bosnia, averaging 30 points, 12 rebounds and 2.3 blocks in 34 minutes per game, helping his country earn promotion to Division A, and winning MVP honors in the process. Then he joined the senior national squad for the European Championship in Turkey (Eurobasket), starting alongside Zaza Pachulia in a very successful campaign.

Back in Charleroi for the 2011-2012 season, Shengelia immediately earned the starting power forward role with his aggressive play, helping the team advance to the Euroleague group stage through the qualifying tournament. He's been playing a steady 20 minutes per game since, having a number of notable performances along the way. A recent foot injury has set him back for a couple of months, but not before he was able to make his mark in 21 games in the Euroleague and Belgian league.

Standing 6-9, with long arms and a very well developed frame, Shengelia stands out immediately from a physical standpoint. He's a very good athlete for a European prospect, running the floor fluidly and being capable of playing above the rim.

Shengelia's best attribute is clearly his motor, as he's an extremely tough and aggressive player who plays the game with great energy. He crashes the glass extremely well for his size, pulling down 9.2 rebounds per-40 minutes in the Euroleague, one of the better rates at his position at the highest level of competition in the world outside the NBA.

Offensively, Shengelia is not an overly skilled player, but finds ways to get the job done thanks to his physical tools and aggressiveness. He's a very good ball-handler for his position, being capable of igniting a fast break on his own and also very dangerous creating his own shot from the perimeter in the half-court. His coach likes to isolate him against opposing power forwards and let him go to work with his strong first step and long strides. He draws a good amount of free throws this way, as he's capable of driving in either direction and is not afraid to go right into the teeth of the defense and draw contact.

If guarded by a smaller player, Shengelia has a bit of a post game he can utilize as well. He shows good footwork and some nice spin moves in his arsenal, again taking advantage of his strong physical attributes and aggressive demeanor.

Shengelia's propensity for attacking defenses can get him in trouble at times, as occasionally he'll look out of control running into brick walls and turning the ball over. He's a somewhat of a bull in a china shop, so learning how to harness this energy is something that will benefit him as he gains experience.

The biggest question marks surrounding Shengelia's offensive game revolves around his jumper, which remains streaky. He's converted 10 of the 41 jump-shots he's taken this season thus far, being exclusively a catch and shoot threat.

Defensively, Shengelia is mostly a mixed bag at this point, and may be considered a tweener by some. Considered a potential small forward earlier in his career, he lacks the lateral quickness to guard most perimeter players, but is also not overly effective inside the paint either. Euroleague teams have gone at him pretty regularly this season, and he's been backed down fairly easily inside the paint, shown questionable awareness and been fairly foul prone.

Not very experienced but going up against some of the most skilled players in the world, Shengelia has shown an admirable demeanor that bodes extremely well for his future. His body language is excellent, as it's clear that he's a mature, no-nonsense type player who is a very good teammate. His work ethic is reportedly superb, which leaves plenty of room for optimism regarding the development of his skill-level in time.

Shengelia has already shown this season that he has a bright future playing at the highest levels of European basketball, that much is clear. With his toughness and athleticism, he seemingly has a style of play that should translate to the NBA level as well. If he can find a way to become a more consistent shooter, Shengelia should be able to carve out a niche for himself in the NBA in the Brian Cardinal or Andres Nocioni mold. He looks like a very solid value pick for a team looking to draft and stash an international player in the second round.
Read full article

Jonathan Givony
@DraftExpress
The second-youngest player in attendance at the tender age of 17, not a great deal was expected from Pamesa Valencias Tornike Shengelia. He didnt do much over the course of the week to change that notion, having a somewhat difficult time making his presence felt on the floor at times. Still, you could see that there are some raw tools there to work with, and it will be interesting to see how he develops over the next few years. Shengelia is intriguing as a big small forward with a nice frame and solid athletic ability. He can put the ball on the floor with a solid first step and decent ball-handling skills, even if he mostly looked content moving the ball around the floor within his teams offense, not trying to assert himself on the game. Shengelia can stand to become a better perimeter shooter, but he showed solid potential defensively coming up with some strong possessions. His feel for the game looks solid, making a couple of nice passes throughout the week.
Read full article