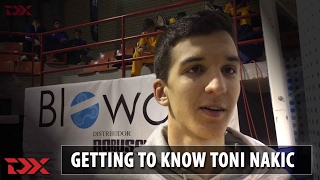 Strengths
-Solid size and a projectable frame for a two guard at 6' 5. Has some length. Very fluid.
-Put together a very strong tournament while on loan from GKK Sibenik  18.5 points, 6.2 rebounds, 3.6 assists, and 1.7 steals per 40 on 57.1% from two and 37.5% from three while playing both on and off the ball
-At his best as a spot shooter. Clean wrist action with great rotation. Can make a rhythm pull up with time and space.
-Has some creativity as a passer. Can use his size to see over the top. Comfortable out of ball screens.
-Long strides in a straight line. Makes an effort to play at different speeds. Has touch on floaters.
-Decent instincts and IQ defensively. Knows where to be off the ball.
-High character guy. Cedevita staff raves about his work ethic. Very likable and engaging.

Weaknesses
-On the thin side at the moment, although his frame is fairly projectable
-More fluid than explosive. Plays mostly below the rim.
-Can play with the ball, but his handle is a bit high and loose. Super right-hand dominant as a driver and ball hander. Rarely uses his left in any capacity. Major area of growth for him.
-Not a very dynamic shooter off the bounce. Shoots a flat-footed set shot in mid-range spots.
-Shies away form contact around the rim. Doesn't have a great knack for getting to the line. Burst is average. Lacks the juice and frame to get all the way to the rim consistently.
-Decision making still has room to improve. Can pass, but doesn't always make the right play. Will force up wild shots in the paint at times. Telegraphs passes on the move.
-Inconsistent defensively. Can make a better effort to sit down and slide. Not very physical fighting over screens. Needs to dig in more on that end.

Outlook
Nakic was a pleasant surprise, earning a spot on the all-tournament team and showing his talent as a shooter and occasional playmaker. He's somewhat vanilla as a shot creator at the moment, but has a nice foundational skill set that could evolve in time, especially when coupled with his smooth outside stroke. Cedevita is hoping to sign Nakic long term. Regardless, he's a guard to keep an eye on from afar due to his positional size, shooting stroke and scoring instincts.