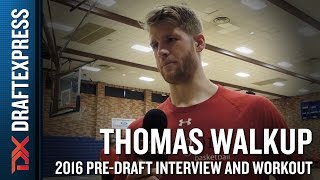 One of the most productive players in the nation the past two seasons, with PERs above 30 in his junior and senior season, Thomas Walkup really put his name on the map with a strong two game performance in the NCAA Tournament, helping his team beat West Virginia before falling on a buzzer-beater to Notre Dame. A lightly recruited player from Texas, Walkup has come a long way in his four year career and has developed into a viable NBA candidate.

Walkup is a jack of many trades, as he lead his team with 24.8 points, 9.1 rebounds and 6.0 assists per 40 this past season. With a true shooting percentage of 66.8%, Walkup was one of the most efficient and versatile players in America. He didn't just beat up on Southland Conference teams, as his numbers in five games against BCS schools were very strong as well at 22.1 points, 5.2 rebounds and 4.1 assists per 40 minutes on a 58.5% true shooting percentage.

He played mainly with the ball in his hands and has the makings of a dynamic player who is able to be slotted into several different positions and lineup constructions. He likely projects as a combo guard of sorts who will need the ball to be impactful at the next level because of his ability to probe the defense and get shots for his teammates, as well as his limitations as an outside shooter. But there are questions about his athleticism and whether he can continue to produce against NBA level athletes.

Walkup has good size for a combo guard, measured at 6'4, with a solid 6'8 wingspan and a muscular 202 pound frame that he uses to body up players in the half-court. This strength could allow him to defend wings as well as guards, which would help his cause immensely. He may not be the most physically imposing player athletically, but he makes up for it with technical skill, confidence, and a great feel for the game.

Walkup is at his best in the half-court with the ball in his hands as he is adept at patiently reading the defense coming off ball screens or after surveying the floor from the wing. From there, he can get into the lane where he can get to the rim and finish at a very impressive 73.2% mark according to Synergy Sports Technology. This ranks twelfth among all players with at least 100 attempts and is particularly notable for someone with his size and relatively average explosiveness, indicating just how strong his skill-level and feel for the game is.

He picks his spots well when he attacks off the dribble and isn't going to recklessly drive to the rim. He is a crafty finisher at the rim and has good touch on his layups off the backboard. He'll no doubt see a drop in efficiency against pro rim protectors, but he's shown he can score inside the paint. Even if he can't finish, he uses his body to draw fouls and get to the line where he makes 83.2% of his 8.4 attempts per 40.

He has also demonstrated the ability to distribute the ball to his teammates and set them up for easy scoring attempts. He's strong with the ball and makes the easy pass, instead of going for the highlight reel plays, which limits his turnovers to just 2.3 per 40 (11% turnover percentage) which is extremely low for such a high usage ball-handler. He's not a flashy passer but he always seems to find a way to deliver accurate passes to the open man for good looks at the rim.

A somewhat reluctant perimeter shooter throughout his career, Walkup has attempted only 118 three point attempts in four seasons, converting on 29.7%. As partly evidenced by his free throw shooting, his shot mechanics aren't broken, but they will need some tweaking and he needs some confidence in his shot more than anything. He's more of a willing and capable midrange shooter off the dribble but will need to be able to extend his range to the three point line while also being able to spot up around the arc as this is becoming a required skill for NBA perimeter players. Developing this part of his game could very well be the difference between him carving out a niche at the NBA level and staying in the fringe player D-League/European category.

Defensively, teams will want him to be a versatile, switching defender but his physical profile may limit his effectiveness at times on that end. While he will certainly accept that challenge and compete against every opponent, he doesn't show the best lateral quickness to stay in front of highly explosive point guards or the size to slow down bigger wings.

There are some positives to his defensive profile, as he will be one of the most competitive players on the floor and is always looking to make a play. He crashes the glass to pull down 6.0 defensive rebounds per 40 minutes and uses his length to create 2.8 steals per 40. This is nice box score production but his bigger question mark defensively is who he matches up with individually and how he can use his athletic profile to become a useful defender.

Already 23, the easiest thing to do would be to write off Walkup as just another dominant small- level conference star. However, he put some of those concerns to bed with some strong performances in the NCAA Tournament as well as a productive showing at the Portsmouth Invitational Tournament. If he can prove that he can play a role as the type of versatile point forward/combo guard many teams are actively looking for, he could certainly find a way into a NBA roster with his competitiveness and feel for the game, possibly after some seasoning in the D-League. Either way, he will no doubt be a sought after international player with his ability to affect the game in multiple ways.
Read full article

Matt Williams
@DraftExpress
Back to back Southland player of the year Thomas Walkup stole the hearts of the national media with his versatile and confident game, as well as his outstanding facial hair, in an impressive shellacking of #3 seed West Virginia in the first round.

Somewhat of a Southland version of Draymond Green, Walkup does a little bit of everything for SFA, moving off the ball intelligently, handling in the open court, finding the open man, and finishing around the rim with tremendous efficiency. He plays a point forward role for them, operating both on and off the ball, but showing intriguing ability to create out of pick and roll and and isolation situations with slower big men guarding him. West Virginia's players openly admitted they didn't take Stephen F. Austin seriously after the game, and there's no way that will be the case again against Notre Dame.

While there is a lot to like about the strength, intensity level and basketball IQ he displays, there are some concerns about projecting the tremendous productivity Walkup has been able to achieve at the college level to the professional ranks, due to his lack of height, average athleticism and inconsistent shooting ability. Walkup is a career 35/115 (30%) 3-point shooter, and his percentages have disappointingly fallen every season since his sophomore year. Walkup did make two 3-pointers against West Virginia, but struggled making shots off the dribble, so it will be interesting to see if he can continue to demonstrate some long-range prowess against a significantly worse defensive team in Notre Dame.

The responsibility for guarding him will likely be tasked to power forward Bonzie Colson, a similarly undersized, but incredibly long-armed power forward who brings great strength and competitiveness to the table. This will be an extremely intriguing matchup to follow in what promises to be a huge contrast in styles.
Read full article