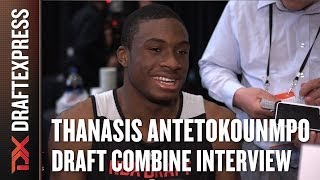 Thanasis' terrific physical tools give him plenty of room to grow long term as his basketball IQ, skill-level and fundamentals improve.

Attending the D-League Showcase in Reno this past week gave us an excellent opportunity to evaluate Antetokounmpo's very distinct strengths and weaknesses as a prospect, which we've done in the following video scouting report courtesy of Mike Schmitz.