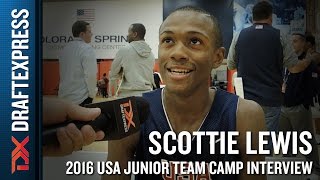 Matt Williams
@DraftExpress
Another dynamic athlete who possesses unique intensity and versatility, Ranney School (NJ) star Scottie Lewis does a bit of everything on the floor and standing 6'5 with a 6'10.25 wingspan and a 178-pound frame, has excellent long-term physical potential for a shooting guard. Lewis's height and wingspan are nearly identical to Dwyane Wade and James Harden, though he doesn't have nearly the bulk of either player. Lewis hasn't gained much weight since last summer, and it remains to be seen how much he can bulk up. Even if he can't, his frame right now is a mirror impact of Jamal Crawford's when he was coming out of Michigan in 2000.
Read full article

Matt Williams
@DraftExpress
Scottie Lewis ranks among the more intriguing prospects in the class of 2019 with his combination of length, athleticism, and versatility. He's really struggled to find his offense and has looked frustrated at times in turn, but his placement here shows how versatile he is as a player. The only true wing on this list, Lewis's explosiveness and motor are what separate him as a prospect.  Able to impact the game in a variety of ways, Lewis does his best work at the moment as a rebounder, defender, and finisher.
Read full article

Mike Schmitz
@Mike_Schmitz
While Curry Camp was full of high level prospects and two potential top picks in the 2017 NBA Draft, 16-year-old Scottie Lewis has a chance to be one of the better players to come out of this year's camp when it's all said and done.

The 6' 5 ultra athletic wing first impressed us at the 2016 Under Armour Association in Los Angeles, and made an even stronger impression in Walnut Creek. What first stands out about the New Jersey native is his length and fast-twitch explosiveness. He plays above the rim with relative ease and is equally as bouncy off of one or two feet. Lewis can fly in for tip dunks or take off without much of a gather and leap at a high level for his age. From a physical standpoint he's long and, while thin at the moment, has a nice frame that will fill out in time.

He's not all that polished offensively and has a ways to go with his feel for the game, but Lewis' motor, toughness and intangibles on the floor are extremely high for his age. The Ranney School (NJ) product is the first player to jump into every drill and is constantly taking on new challenges. He had no fear of defending incoming Kansas freshman and high-level prospect Josh Jackson and didn't back down from physicality one bit.

Lewis' toughness, energy and willingness to put his age and stature aside and compete were eye opening. Lewis also appears to have a genuine enjoyment for the game and is by all accounts an excellent teammate. All of those traits combined make him a very effective defender as he flies around off the ball, even blocking jump shots at times. He covers ground extremely quickly, and sits down in a stance on the perimeter, using his quick feet, long arms, and will to stop his man to be effective. Lewis does a lot of little things on the defensive end, and is an active cutter and offensive rebounder as well.

In terms of his offensive skill set, Lewis still has quite a bit of room to grow. He's not the most polished ball handler and can get sped up at times. While dynamic in transition (30.8% of his offense in 11 Under Armour games for Team Rio 16U), he scored only 0.63 points per possession in the half court while turning it over on 21.1% of possessions. Although he's certainly a willing passer, his energy level causes him to get out of control at times and he doesn't quite have the consistent skill level to fall back on.

With that said, Lewis shows some serious flashes, especially as a slasher. Thanks to his quick first step, long strides, ability to get low out of the break and his explosiveness around the rim Lewis is very dangerous when he gets going downhill. He doesn't shy away from contact and has the fast-twitch muscles to be able to change speeds and directions as his handle improves. Lewis also shows flashes as a jump shooter. While his mechanics aren't perfect, he gets excellent rise, solid rotation and shoots it with confidence. He made only 6-of-33 jumpers in eleven Under Armour Association games, but he shot it fairly well both off the catch and dribble at Steph Curry Camp and should be able to at least become respectable from the perimeter in time given the fact that his stroke is far from broken.

At 16 years old, Lewis isn't a ready made prospect (he still may be growing), especially skill wise, but it's rare to find a player at his age with his combination of physical tools, explosiveness, energy level, intangibles and flashes of skill. At the very least Lewis figures to be an energy athlete at the college level and beyond, but if his skill level develops as it should, he has a chance to be a well-known name sooner rather than later.
Read full article