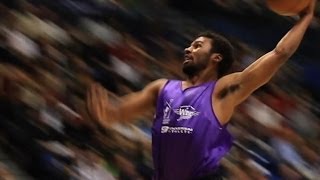 Matt Williams
@DraftExpress
Overview:A young point guard who is learning his role on the NBA level after being a prolific college scorer. Has decent height for a point guard and a solid build. Extremely fast and agile. Incredibly explosive around the basket. Attacks the rim with no regard for his well-being. Shows a passable shooting stroke. Takes a lot of scoops and floaters. Plays with great defensive intensity. Walked on at Nicholls State standing a little over 57. Earned significant time as a freshman proving to be one of NSUs best players. Showed enough ability to earn a scholarship from then Junior College Utah Valley State. Proceeded to grow roughly seven inches and became one of the best scorers on the Division I level when UVSU made the jump from the NJCAA ranks to the NCAA. Tireless work ethic earned him a shot in the NBA after he went undrafted. Showed a ton of heart at the various pre-draft venues to the point that he earned a guaranteed deal. Now on his second team, but is beginning to adapt to the point guard position and level of competition hes facing. Will be a free agent next summer, and will probably be looking for a long-term home as a backup.

Offense: A somewhat effective spot player who works too hard not to make some impact offensively. Gets his offense from a balanced mix of pick and rolls, spot ups, fast breaks, and one-on-ones. Possesses a decent jump shot with good range and nice elevation. Respectable from three point range. Not a bad catch and shoot option off the end of the bench. Cant always get his shot off over bigger players. Not as consistent off the dribble as he is from a stand still. Prefers to use his short-range game rather than pull up for midrange jumpers. Attacks the rim aggressively, showing a nice array of floaters and scoops. Wont hesitate to go right at a defender and go to the line. Not a great foul shooter. Not a bad finisher for a player his size, but has to get creative which hurts his consistency. Shows nice passing ability off the pick and roll and in transition, but is still developing his point guard mentality. Handles the ball well and is always in attack mode, but needs to learn to control tempo and show better shot selection. Plays too fast at times and doesnt always do a good enough job getting his team into their offense. Has a lot of room for improvement, but isnt a bad third point guard on the offensive end.

Defense: A very talented defender who has great lateral quickness and gives a very nice effort. Lack of size hurts his ability to contest the shots of taller players. Works very hard not to give up an open look. Almost too quick for his own good at times, closing out too fast at times and biting too hard on crossovers. Will get beaten to the rim by being too aggressive. Does a great job fighting through screens despite his stature. Always gets a hand up when his man puts up a shot, using his leaping ability to maximize his length. Will struggle to defend most shooting guards. Brings a lot to the table as a full-court defender that can wear his man down in limited minutes off the bench.
Read full article

Landry Fields
@DraftExpress
Continuing with the trend of superstar players from smaller teams, we get to talk about off the radar, Ronnie Price, from Utah Valley State of the Division I Independents conference, who is a pretty amazing story in himself. He graduated from high school as a scrawny 5-7 kid who had to make it onto the mighty Nicholls State squad as a walk-on. Despite not being a scholarship player initially, he led the team in points, assists and steals and was named team freshman of the year. As he grew (and grew and grew), Price managed to get himself a scholarship and eventually transferred to Utah Valley State, then a Junior College. While he was there, they became the first school to go from being a Junior College team to a full fledged D-I program, and are now amongst the independents with Price as their unquestioned leader.

Price played his last home game ever in a Wolverine uniform this week, and put on a show for his fans and team on senior night. He scored 36 points, a season high, on 13-24 shooting from the field and 6-11 from behind the arc. While it is very hard to evaluate a player like Price based off the level of competition he goes up against every night, along with the type of players that surround him, he has been drawing attention from the scouts this year. Danny Ainge from the Celtics has scouted him, as has more than half the league so far this year. Luckily for us, he has been invited to Portsmouth and has accepted his invitation. He could be a legit draft sleeper, but we will have to take a look and find out for ourselves.
Read full article