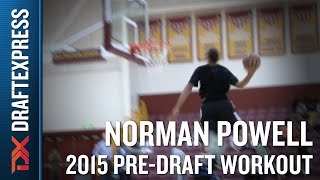 Norman Powell followed up his solid rookie season with another strong showing at the Las Vegas Summer League. The #46 pick in 2015, who found himself splitting time between the NBA and D-League to start the season, earned the trust of the coaching staff in Toronto and ended up playing some valuable minutes during their playoff run to the Eastern Conference Finals.

Powell is a slashing guard with elite physical tools (including a 6'11 wingspan), who is at his best getting downhill or out in transition, using his strength and athletic ability to finish around the rim. He was not a strong 3-point shooter in college, but he has shown a great deal of improvement in that aspect of his game, shooting 38% on 114 attempts last season, and following that up with a 12-26 performance in Las Vegas. Powell has ball-handling and play making abilities, but he is more of a scoring guard who is looking to get into the paint and score, sometimes leading to some wild shots when the defense has collapsed around him. He has all the physical tools to guard multiple guard positions at the NBA level, and he will continue to grasp a better sense of how to be effective and use his tools on that end of the floor. Powell was acquired by the Raptors in a draft day trade for Greivis Vasquez (which also netted a 2017 first round pick), and is looking like a major steal considering where he was drafted.
Read full article

A tough, athletic shooting guard from San Diego, Norman Powell's solid four year career at UCLA came to an end at the hands of Mark Few's Gonzaga Bulldogs, after the Bruins made a surprising run to the NCAA Tournament Sweet 16. A consensus top-50 recruit in the high school class of 2011, Powell struggled to find his footing during first two years in Westwood playing a minor role offensively and seeing his playing time dry up for stretches.

It wasn't until last season, when the coach he committed to, Ben Howland, was replaced by Steve Alford, that Powell hit his stride, averaging 11.4 points per game as an exceptionally reliable roleplayer on a team that sent five players to the NBA. Opting to return to school rather than taking a gamble and declaring for the 2014 NBA Draft, Powell relished his opportunity to shine as the Bruins' first option, even if he wasn't terribly efficient, earning All-Pac 12 First Team honors and solidifying his draft stock.

Powell's campaign for the 2015 NBA Draft started with a strong showing at the 2014 adidas Nations experience, where he, and a number of other high level college prospects, attended as a counselors. Standing 6'4 with a 215-pound frame and a massive 6'11 wingspan, Powell's physical tools and aggressiveness helped him stand out among a group that included Stanley Johnson, Terry Rozier, Montrezl Harrell, and Frank Kaminsky. A tremendously explosive leaper with great speed and unique strength for a guard, Powell was dominant at times competing against his peers, showcasing his game in front of scouts and gaining significant momentum heading into his senior year.

Powell's final collegiate season can be split into two segments that highlight his strengths and weaknesses as a prospect on the offensive end.

Powell's most appealing attribute from an NBA perspective is his ability to make use of his athleticism, which translated into very prolific scoring numbers around the basket during the 2nd half of the season. An aggressive slasher whose first step, strength, and willingness to try to play above the rim in traffic made him a physically imposing matchup at the college level, Powell did his best work last season attacking the basket.

In contrast, Powell's jump shot was very steady early on, but didn't serve him particularly well during the 2nd half of the season. His regression was particularly notable in catch and shoot situations, as he made 51.4% of his attempts prior to January 1st, but only 28.6% after that. Looking comfortable knocking down jump shots in rhythm when his mechanics are fluid, his tendency to shoot on the way down and hesitate before his release continue to limit his efficiency. An average shooter over the course of his college career, Powell's ability to become a reliable spot up threat could be a game-changer for him at the next level, as there's quite a few other things to like about his game.

To Powell's credit, he changed his approach offensively when his shooting struggles began as a senior, looking to attack the rim more aggressively both in transition and the half court. He ended the season ranking among the most prolific transition scorers in all of college basketball in terms of points per-game according to Synergy Sports Technology. It will be interesting to see if Powell can continue to make a significant impact on the break and as a slasher at the NBA level.

Aside from his scoring ability, Powell is still developing as an offensive player, which isn't surprising considering this was his first season as a featured option. Despite his ability to draw additional defenders attacking the rim, he tends to look for his own shot rather than find the open man. His quickness and solid, but not spectacular ball-handling skills give him some upside as a playmaker if he can gain a better grasp of the nuances of running the pick and roll, and refine his ball-handling and shot-creation ability.

Defensively, Powell was solid as a senior after being tremendous at times as a junior. Possessing good lateral quickness, great length, and active hands, Powell has promising tools on this end of the floor. He lunges at shooters and can fall victim to quicker guards with tremendous advanced ball handling ability when they make multiple moves, but generally plays with good energy, doesn't get out of position too often, and isn't prone to giving up anything easy one-on-one. His athleticism and length allows him to make impressive plays as a rebounder and scrapping for turnovers, but he doesn't do either at an elite level. His role and heavy playing time this season seemed to wear on him on this end of the floor relative to what we saw from him when he was coming off the bench last season, but there's no question he has all the tools you look for in a multi-positional shut-down defender.

Norman Powell may not be an elite scorer or a dynamic playmaker at this stage, but he's one of the more hard-nose competitors you'll find in the college game. Never missing a game over the course of his UCLA career playing through a number of injuries, Powell's grit can't be questioned. A likely second round pick, if Powell can improve his jump shot and reach his full potential defensively, he could carve out a long NBA-career as a complementary player playing a role closer to the one he filled as a junior than the one he filled as a senior.
Read full article

Powell wasn't perfect on Friday but he made enough dynamic plays on both ends of the floor to help make up for some of his shortcomings as a shooter and overall scorer in the half court. Powell put together an impressive second half in which he used his athleticism to make plays in the open court and his aggressive mentality to attack the rim in the half court, all while chasing Anthony Brown around relentlessly on the other end of the floor.

Powell struggled with his jump shot overall on Thursday and Friday, but he was able to knock down a one-dribble pull up after a hard jab step right and pound dribble going left. Powell's most impressive play came on a straight line drive after his defender gambled on the pass. Powell attacked the rim and took off well outside of the painted area for what looked like a dunk attempt vs Rakeem Christmas. As the 6' 3 explosive shooting guard saw Christmas 7' 5 wingspan at the rim he adjusted mid-air and finished underneath the Syracuse big man's arms to convert the And 1.

Powell finished another straight line drive off of a side out of bounds play and also attacked the rim in the half court to draw the backline defender before dropping it off to Vince Hunter for a layup. As was the case on Thursday (and at times at UCLA) Powell did tend to settle for contested jumpers early in the clock and showed an average feel for the game when he tries to play outside of himself. Luckily for Powell, he projects more as a role player at the NBA level and has the potential to be a lockdown defender who can make plays in the open court and attack in a straight line in the half court. Powell needs to refine his jump shot to keep defenses honest, but he showed other aspects of his game on Friday that make him an intriguing pick in the second round.
Read full article