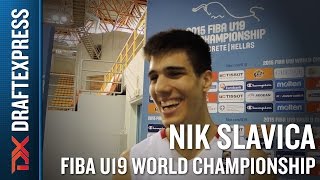 Strengths:
-Has great size for a shooting guard at 6-7.
-Very strong frame that will only continue to fill out in time
-Big hands, long arms
-Tremendous athlete. Had a handful of unbelievably impressive dunks and blocks throughout the course of the tournament
-Good in transition, where he finds himself frequently
-Can create for himself and others off the dribble
-Gets to the basket in the half-court thanks to strong first step, sometimes to throw down impressive dunks
-Averaged 5.9 assists per-40, one of the best rates at the tournament regardless of position
-Outstanding rebounder at every level he's played at. 8.0 per-40 in Crete.
-Shooting mechanics are not bad at all. Has made jumpers at every level he's played at. 1.5 made 3s per-40 in national team competition
-Even hits shots off the dribble in mid-range area when defense closes out too aggressively
-Excellent defender. Guarded 3-4 positions on a consistent basis in Crete. Often used to slow down point guards thanks to outstanding lateral quickness. Shut down a number of very good offensive players over the course of the week.

Weaknesses:
-Not an efficient or prolific offensive option historically. Career 47% 2P%, 25% 3P%, 62% FT% in nearly 1000 minutes of action
-Outside shot shows potential, but was career from consistent even at the U19s. Made just 7/26 3-point attempts and 59% of free throws
-Has a little bit of a slingshot motion to his jumper. Hesitates to shoot when left open at times. Splayed some ugly jumpers left and right at times, including a few airballs.
-Decision making is not quite there yet. Doesn't always know his limitations. Shot-selection can be questionable.
-Ball-handling skills are improvable. Can blow by opponents with his first step, but needs to continue to work on change of speeds and directions, especially in pick and roll and isolation situations
-Has a reputation for being a little bit off-center back home

Outlook: One of the breakout performers of the U19 World Championship. Saved his best game for last, scoring 23 points with 5 rebounds, 6 assists and 3 steals against USA in the Finals. Was huge against Turkey in the semi-finals as well. Has the makings of a high level prospect with his tremendous size, frame, athleticism, playmaking ability, defensive potential and decent shooting stroke. If he can find a consistent outside jumper he is a very likely NBA player.
Read full article