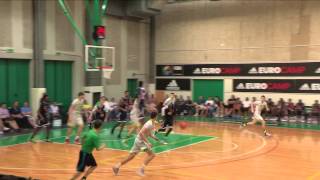 Jonathan Givony
@DraftExpress
Like Mega Vizura teammate Vasilija Micic, Nemanja Dangubic had a very strong day today. Scoring 23 points for the EuroCamp All-Stars against the adidas USA Select Team, the athletic 6'7 wing isn't a great ball-handler and needs to get stronger, but his combination of defensive intensity and finishing ability helped him make an impact.

Playing primarily off the ball today, Dangubic found a comfort zone, no longer forced to create his own offense which led to a number of turnovers yesterday. He went 2/5 from three spotting up, which was nice to see, as he shot just 29.5% from beyond the arc during the Adriatic League season. If Danbugic can develop a consistent outside shot, he has terrific roleplayer potential.

Having grown over 2 inches since last year according to official measurements, he's a player to watch as we approach the international withdrawal deadline.
Read full article

Jonathan Givony
@DraftExpress
Nemanja Dangubic wasn't the most noticeable player on this Serbian squad in terms of production or even playing time, but he drew some interest nonetheless thanks to his size at the wing position and his excellent ball-handling skills.

Dangubic saw minutes at the point guard spot for Serbia, despite standing 6-7, which led to comparisons to fellow Serbian point forward Nemanja Bjelica. He showed a nice feel for the game, handling the ball comfortably in transition and making some nice spin moves into the paint. He looked extremely bashful when it came time to shoot the ball, though. He only attempted a handful of shots over the course of the tournament, none of which came from the perimeter. He clearly needs to improve on the defensive end as well.
Read full article