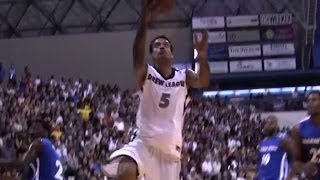 Matt Williams
@DraftExpress
Overview: A scrappy, experienced combo forward who has found a home in the NBA thanks to the aggressive mentality he brings to the floor. Not afraid to lower his shoulder and dish out contact. A self-made player--bounced around the NBA and D-League early in his career, considered more of an undersized PF in college, but did done some nice things as a Warrior, even if hes yet to be rewarded for that with a contract. Cutting down on turnovers and improving his jumper have been key for his career, although he tends to fall in love with it excessively these days at times. Has prototypical size for a wing at 6-8. Runs the floor extremely well, and has above average explosiveness. Will put up nice offensive numbers from time to time, although not efficiently. Gives his team toughness and some perimeter shooting ability, even if hes prone to long bouts of inconsistency from beyond the arc. Plays with energy and can make some plays on the defensive end. A terrific rebounder, possibly Golden States best when he was there, despite his size. Still a bit too inconsistent, but hes still improving. Played four solid years at UCLA, but wasnt an elite collegiate player. On the gridiron, was one of the top receiver prospects in the nation as a prep.

Offense: Played the 3 and the 4 for Golden State offensively, mostly taking advantage of mismatches. Not what you would call an overly skilled player. Gets the vast majority of his shots from spot ups and fast breaks. Very aggressive with his shot selectionhas the utmost confidence in himself. Will take some ill-advised threes when spotting up. Shows a very ugly shooting stroke, shooting the ball on the way down with very little elevation, but hes managed to somehow make it work with semi-decent results. Uses his arms to get the ball to the rim, which hurts his consistency. Still capable of getting hot from that distance. Used to not be able to shoot at all, but has become passable from distance thanks to hard work, even if he has a tendency to rely on it too heavily now. Ball-handling skills are poor. Rarely gets to the free throw line. Pull-up jumper is not very effective. Gets a little too aggressive at times. Actually has a very nice feel for the game, though. Moves well off the ball, and is a very good passer for his position. Gets some easy looks at the rim by running the floor hard in transition, beating other players down the court with sheer tenacity. Needs to work on his free throw shooting, but isnt too bad from the stripe. Will crash the glass, especially when hes following transition plays.

Defense: Solid defender on the perimeter who had a tough time defending the power forward spot when the Warriors use small line ups. Not strong enough to defend true post players, but puts in the effort. Has a tough time keeping them on his back when boxing out. Gives fouls in the paint when hes beat. Much more apt at defending the perimeter, even though he suffers from a very poor wingspan. Quick feet and size help him deny penetration. Great rebounder considering his size. Capable of anticipating passes and deflecting them. Decent shot blocker as well.
Read full article