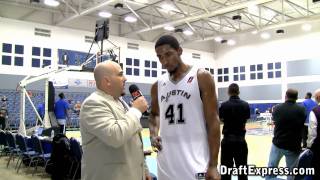 A late-blooming center in his second year of professional basketball, Marcus Cousin has been one of the nicest surprises of this D-League season thus far.

6-11, with long arms, an excellent frame and a fairly intriguing skill-set, Cousin has been putting up solid numbers for San Antonio Spurs affiliate the Austin Toros, scoring nearly 20 points per-40, and ranking as one of the league's best rebounders.

Offensively, he is capable of scoring both inside and out, showing a decent post game which he augments with a fairly consistent mid-range jumper. He can establish deep position in the paint with his excellent frame, mostly to turn into a right-handed jump hook or attempt to draw a foul. From the perimeter, he's a solid pick and pop option with nice mechanics and the ability to get his shot off in a variety of ways, also converting 83% of his free throws on the season

Not exceptionally athletic, Cousin is just an average runner and isn't one to finish above the rim in highlight reel fashion. Possessing just an average feel for the game, Cousin is not a very prolific passer and still has work to do in terms of gaining experience and figuring out his optimal role at the pro level.

Defensively, Cousin's size, frame and long arms are major assets at any level of basketball, and already help him out significantly inside the paint. While not much of a shot-blocking threat, Cousin puts the work in early by bodying up his man aggressively, and is able to make a nice impact against most of the traditional big men he faces in the D-League.

Where he runs into trouble is when matched up with undersized, but athletic big men who can take him off the dribble and bait him into biting on pump-fakes. His lateral quickness is not the best and he has a tendency to leave his feet too easily at times, while his motor occasionally leaves something to be desired.

The fact that he's such a prolific rebounder on both ends of the floor helps his cause quite a bit, though, as there's always a demand for big-bodied players who can clean up the glass in the NBA.

After transferring between Seton Hall and Houston in college and then going through a pretty tumultuous rookie season as a pro, bouncing around between Turkey and Israel, never really finding his rhythm, Cousin is getting big minutes at the D-League level, and is likely opening up some NBA eyes along the way. Its probably only a matter of time until someone gives him a call-up to see what he can offer.
Read full article

Joseph Treutlein
@DraftExpress
A late addition to Portsmouth, Marcus Cousin looked like he belonged and then some, actually being one of the more productive big men in attendance. He has some intriguing characteristics, including nice size (he apparently measured 6-10 ½ barefoot), an excellent 7-2 wingspan, and a 248 pound frame that should easily be able to handle another 15-20 pounds of muscle over the next few years. Hes also a good athlete, getting up and down the court well, and being very capable of getting off the ground to finish plays or challenge shots.

Cousin didnt have a terribly productive college career, having spent his first two seasons at Seton Hall and then transferring to Houston after being mostly a non-factor in the Big East. His only real playing time came as a 5th year senior, where he averaged around 11 points and 8 and a half rebounds per game, to go along with 2.1 blocks.

Never known as much of a scorer, Cousin justified that reputation with the extremely raw footwork and limited post moves he showed with his back to the basket. He did display very nice touch from mid-range, draining a number of shots in the 15 to 17 foot area, as well as a lone 3-pointer. Cousin shot a very solid 76% from the free throw line on the season, so this probably shouldnt come as that much of a surprise.

Looking back at his film from Houston, he probably could have done a better job scoring this past season if he had some better guards to get him the ball, as he has the hands and finishing ability to at least be a solid finisher around the rim, even if you rarely saw him touch the ball in scoring opportunities created by others in the games we evaluated. He only ranked 4th on a bad team in field goal attempts, but regardless got to the free throw line at a very nice rate.

Despite spending five years in college, Cousin doesnt look anything like a finished product yet, as he still needs to work on his passing skills and ability to utilize his size inside, as well as improve on the defensive end. He has excellent tools here, but seems to lack strength (especially in his lower body) and fundamentals, being outmuscled at times in the paint, as well as on the glass. He doesnt move his feet very well on the perimeterreally struggling to hedge screens in pick and roll situations, but is very effective as a weakside shot-blocker, showing nice instincts to go along with his length and athleticism. As a rebounder, hes fairly effective, but could even be more productive if he put a little more effort in, especially on the defensive glass.

While his basketball IQ may not be off the charts, with good coaching and more experience, Cousin might be able to develop into an Earl Barron type big man over the next few years. While he probably wont get drafted, he might be the type of player who decides to stick around the States and hangs out in the D-League for a while, just to see if he can get any additional looks as he continues to make strides with his overall game.
Read full article