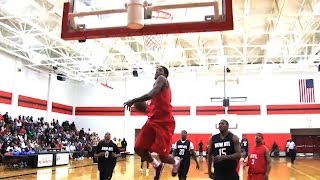 Matt Williams
@DraftExpress
Overview: A prolific scoring guard who displays unquestionable talent, but is still very raw in many facets of the game. Very undersized for a shooting guard, which has forced him to learn how to run the point on the NBA level. Has a very narrow frame that he will have to maximize if hes to reach his full potential. Super athlete. Great first step and devastating speed in the open floor. Jumps out of the gym. Has developed the skills necessary to make an impact offensively on the NBA level, although not in an efficient manner by any stretch. Needs to continue to improve his ability to run the point as well. Will always be a shoot-first type most likely, which is why playing next to a big point guard who can defend shooting guards may benefit him. Looked to be on the verge of a breakout season after signing a large contract extension, but took somewhat of a step backwards in 08-09, shooting less than 40% from the field. Declared for the draft straight out of South Gwinnett HS, but slid all the way to the 2nd round. Won the Naismith Player of the Year Award as a senior. Spent some time polishing his game in the NBADL. Still has considerable potential to improve at just 22, and is playing under a fairly affordable deal considering his upside. Will have to show that he can run the point effectively now that Andre Miller is gone.

Offense: A very talented scorer who excels in the open floor. Loves to push the ball up the floor in transition, and can beat everyone down the floor with his terrific speed. Can turn the corner routinely on the pick and roll due to his first step and tremendous ball handling ability. Very fluid, explosive slasher who can drive in either direction, and does an outstanding job of drawing fouls. Displays a great crossover and is often able to take his man one-on-one. Struggles to finish at the rim due to his lack of size and strength. Excellent at creating contact and drawing fouls, but has problems if he cant get the refs to make a call. 2-point percentages are underwhelming, largely due to his poor shot-selection. Not a good decision maker, and really struggles with his perimeter jumper at times. Way too trigger happy for his own good. Shoots a flat-footed knuckleball type jumper that doesnt go in often enough. Much better off the dribble actually than in catch and shoot situations. Has a solid midrange game, even if his poor shot-selection hurts his efficiency. Uses shot-fakes effectively and really displays a knack for making tough shots. Doesnt make a major impact as a point guard, but has improved. Still learning how to run a half court offense and control tempo. Needs to continue to work on cutting down on his turnovers, an area hes made big strides in. Starting to figure things out, but hasnt gotten a chance to control the ball with Andre Miller around.

Defense: A rapidly improving defender who has the quickness to stay in front of almost any guard in the league. Has more success against point guards than shooting guards due to his size, but doesnt always have that luxury. Uses his length effectively, gets in a good stance and move his feet well when defending the ball. Puts solid pressure on his man and plays with a high level of intensity when he wants to. Good man to man defender when dialed in, but can still improve on his team defense. Cant always contest the shots of taller players due to his lack of height. Narrow frame means hell get caught behind screens on occasion. Creates a great deal of turnovers due to his length and terrific quickness. Poor rebounder for his position, especially considering that he often needs to play the 2. Will only get better on this end of the floor as he gets stronger and more experienced.
Read full article

Matt Williams
@DraftExpress
Going into his third summer league after entering the draft straight out of high school, Louis Williams needed to have a strong performance to show that he is continuing to progress as a player despite the lack of playing time hes seen with the 76ers. That was accomplished for the most part in Vegas, even if there are obviously many kinks he still has to iron out in his game. Williams had easily one of the most impressive summer leagues of any NBA player, finishing 2nd in the scoring column, behind Marcus Banks who only played one game. Williams showed that he can put points up on the board in this type of setting, and that regardless of who is matching up with him, scoring is something that comes very naturally for him.

Williams biggest draw revolves around his outstanding athleticism combined with his fantastic offensive instincts. He has great quickness, an awesome vertical leap for a 6-1 player, and an explosive first stepbeing better going right, but also having no problem going left when the situation calls for it. More than just a run and jump type athlete, Williams is extremely hard to stay in front of because of how strong his hesitation moves are. He jukes his defender left and right and back and forward to keep him off balance and then explode to the basket, usually finishing the play with a strong dunk. The fact that he got to the free throw line 108 times in 9 games (an astounding 12 attempts per game) is strong evidence of that. He also happened to convert 80% of those.

Williams made a living getting to the free throw line, but he also showed the ability to score from behind the arc and everywhere in between too. He has a very nice shooting stroke once hes in rhythm, and is very much adept at pulling up sharply off the dribble and knocking down a shot with a hand in his face. The 76ers ran infinite pick and roll plays again and again and again with Williams at the helm, and he for the most part did an excellent job breaking apart the defense to score on his own or find the open man. Going underneath the screen isnt an option with him running the point--hes not a lights out NBA 3-point shooter at this point, but he definitely has a lot to work with if he continues to work hard on his shooting range and footwork.

So with that said, you may be asking yourself why he only finds himself on our third team? As you might imagine, Williams showed off quite a bit of weaknesses in the nine games or so that he played in, many of which made it quite obvious why he has yet to break through as a solid NBA rotation player.

The most obvious would be his decision making. At 6-1, Williams will most likely not be able to make a living purely as a scorer. The fact that he averaged 5.4 turnovers per game compared with his 4.7 assists tells a lot about where he stands at the moment as far as his point guard skills go.

Williams shot-selection can be extremely poor at times. On more than one occasion he brought the ball up the floor to start Philadelphias offense and launched up a long-range shot before anyone on his team even had a chance to touch the ball in the flow of the offense. Williams can struggle once his teams half-court sets break down toohe takes too many unnecessary risks with the ball in his hands, trying to be too flashy threading the needle with impossible passes, or trying to split a double team wildly if the defense collapses on him on a trap guarding the pick and roll.

Playing a year or two college basketball really could have helped him iron out many of the little kinks he has in his gamemainly stemming from the lack of experience he possesses playing meaningful basketball in a competitive setting. At times hell pull up off the dribble when he has an open lane to slash, over-penetrate the hoop jumping in the air and only then deciding what to do next, or just drive down the lane with his head down and a full head of steam. This worked very often in summer league because of the lack of NBA athleticism that most of the big man possessedbut these types of moves would be swatted away without mercy if he tried them in a real game.

Learning how to read defenses, see the floor and his teammates better and not rely so heavily on his athleticism will be the key in him reaching his extremely high ceiling. He really has tremendous scoring instincts, but most coaches not named Don Nelson will want to reel him in significantly if they are going to allow him to run their offense.

We havent even started talking about his defensewhich might be the weakest part of his game right now. Not having great length, height or strength, Williams is always going to struggle against most NBA matchupsbut he doesnt help himself out at all with the way he lets players score all over without putting up much of a fight. Guys shoot over him like hes not there, push him around in the paint, and just get right by him off the dribble. Hes not a presence at all defensively in terms of containing his man, and for the most part doesnt seem to always compete that hard on this end.

Williams has the potential to develop into a terrific NBA player without a doubt, but hes still a long ways away from getting there.
Read full article

Rodger Bohn
@DraftExpress
Louis played shooting guard in today's practice as Eric Devendorf and Greg Paulus took the majority of the ball handling duties. He showed NBA range on his jump shot, but he needs more lift and needs to work on the mechanics of his shot. Williams also threw down a few impressive dunks off of the lob passes. I'm still not really sold on Louis as a point guard, and neither was the NBA scout that I spoke with: Neither of those kids can play point guard [Williams and Ellis].
Read full article