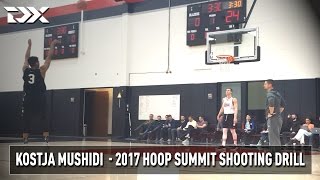 Matt Williams
@DraftExpress
German shooting guard Kostja Mushidi and Lithuanian wing Arnoldas Kulboka are perhaps the two biggest names at this year's camp among players potentially eligible for the 2017 NBA Draft.  Mushidi is coming off a strong showing at the Hoop Summit and some of his best single-game performances of the season with Mega Bemax.  Scouts will be looking to see if the long, strong guard can continue to make shots at a strong rate from the perimeter and get his teammates involved.  A strong effort here could solidify his standing, but it appears more likely that he will withdraw from this draft and try again in the future with another year of seasoning in the Adriatic League .
Read full article

Mike Schmitz
@Mike_Schmitz
Kostja Mushidi, Germany, Small Forward, International, Mega Leks, 18.8  Strengths
-Measured very well, at 6'5 in shoes with a 7'0 1/2 wingspan
-Has a chiseled 226 pound frame. Has clearly worked on his body. Has a well proportioned frame
-Length plus strength gives him the versatility to guard small forwards, and even some small-ball power forwards, which is important considering some of his weaknesses
-Let things come to him nicely most of the week in both the games and practices. Game seems to be slowing down for him. Didn't look as wild as he had in the past
-Solid IQ. Figuring out how to fit in within his role. Moves without the ball. Makes the extra pass.
-Shot the ball fairly well overall on the week, including going 4/7 for 3 in the game (with one impressive iso pull-up 3-pointer). Has a compact, consistent stroke in spot-up situations. Also showed potential as a shot-maker off the dribble at times
-Competitive player defensively
-Still only 18 years old. Has plenty of time to continue to address his weaknesses and is in a great place to do so at Mega LeksWeaknesses
-Not a very creative or polished ball-handler. Doesn't have much wiggle to his game. High, loose and rigid handle that mainly relegates him to straight-line drives. Doesn't have much shiftiness to his game to compensate
-Average passer on the move. Doesn't see the floor all that well once he puts the ball down
-Lacks a degree of explosiveness finishing in traffic
-Not yet a knockdown shooter. Career 31% on 588 attempts. Release is somewhat low, without much of a wrist snap
-Upright defender who gets burned off the bounce frequently by smaller players. Not very quick-twitch laterally. At his best guarding small forwards, even though he's only 6'5.Outlook
When Mushidi is hitting his 3-pointers, like he was in the Hoop Summit game, and at times in the practices, he has the makings of a very solid utility role-player. When his jumper isn't falling, he has a hard time making an impact, as he doesn't bring a great deal of high-level value in any other part of his game at the moment, even if he shows some potential with his length, competitiveness and solid IQ. There's a niche for players in Mushidi's mold in today's NBA, but he'll likely need to continue to gain experience in Europe and polish up his game before he's ready to make the leap over, which makes sense considering his youth.
Read full article

DraftExpress
@DraftExpress
The 2017 Nike Hoop Summit also provides our first opportunity to look at a set of official numbers on German guard prospect Kostja Mushidi who is playing in the Champions and Adriatic Leagues with Mega Bemax this season.  At 6'5, Mushidi has solid size for swingman, but it is his 7'0.5 wingspan and 226-pound frame that stand out among most wings at the same stage.  He has a uniquely mature frame for an 18 year old getting his first taste of high level competition in Europe as one of the heaviest two-guards in our database.  With his tremendous length, he compares favorably to Lance Stephenson who measured 6'5 3/4" in shoes with a 227-pound frame and a 6'10.5 wingspan when he was coming out of Cincinnati in 2010.
Read full article

Strengths:
-Has an excellent frame for an 18-year old. Good wingspan. In very good shape physically.
-Has an aggressive scoring mentality. Wants to put the ball in the basket, which puts pressure on the defense. Scored a very strong 22 points per-40 at this tournament, right in line with his career averages in most competitions he's played in vs other players his age.
-Did a very nice job of creating offense for himself smoothly in transition and the half-court. Made 69% of his 2-pointers at the U18s. Very good driving in a straight line thanks to his strength and quick first step. Shows some budding ability to get low on his drives, change speeds and get into the paint with power.
-Has solid court vision and can creatively deliver passes to teammates for easy baskets. Averaged a strong 5.8 assists per-40 at the U18s, something he's done at a nice rate his whole career.
-Aggressive shooter who is capable of making shots at a good rate with feet set. Makes spot-up jumpers consistently. Struggled with his jumper at the U18s, but has made 3s at a decent rate everywhere he's played.
-Excellent defender when locked in. Covers ground. Gets in passing lanes with his long arms.
-Intelligent and articulate off the court. Has a very good grasp of his strengths and weaknesses in private settings.

Weaknesses:
-Advanced ball-handling skills are a work in progress. Struggles to create out of ball screens or in one on one situations. Doesn't show great burst attacking a set defense off multiple dribbles. Struggles when he gets cut off his initial path.
-Career 4.2 turnovers per-40
-Much better when he's decisive attacking an unbalanced defense in a straight line, as opposed to trying to dance with the ball, which causes him to turn the ball over and throw up bad shots.
-Just an average finisher around the basket. Lacks a degree of explosiveness in traffic. Making just 42% of his 2-pointers on the season with his pro team.
-Finishes on left side of basket with right hand.
-More of a volume shooter than a knockdown one at this stage. Career 32% 3-point conversion rate, on a huge amount of attempts. Struggles to shoot when rushed or not in rhythm. Mechanics fall apart a bit.
-Pull-up takes a while to get off. Not really a threat to make shots off the bounce consistently.
-Very reactive to what's happening in the game. Loses a degree of control at times when him or his team are struggling. Shows bad body language and starts to hunt shots excessively.
-Shot-selection and overall decision making is a work in progress. Tries to force the issue regularly. Doesn't always let the game come to him.
-Seems to put a lot of pressure on himself. Wants to be the guy. Will need to be more of a role-player/fill in the blanks type in the NBA.

Outlook: Mushidi had somewhat of an up and down tournament, posting one very impressive game in the semi-finals against Lithuania (33 points in 28 minutes) while struggling to find his rhythm in others. Looked to be pressing at times like the entire German team, which disappointed in finishing fourth despite having arguably the most talent at the event. Has had some strong games in the Adriatic and FIBA Champions Leagues this season at the pro level and appears more under control playing against men. Ticks a number of boxes with his physical tools, spot-up shooting, budding passing and ability to attack in transition or off closeouts. Still very inconsistent from game to game, struggling to make an impact and demonstrate his versatility when his shot isn't falling. Will need to continue to learn how to harness his talent and improve his polish on both ends of the floor.
Read full article

Bogdan Karaicic
@bhoops2016
German wing Kostja Mushidi discusses his strengths and weaknesses at the U18 European Championship, with accompanying video from the tournament overlayed.

DraftExpress
@DraftExpress
The headliner of this group is Kostja Mushidi, one of the top prospects in the 1998-born age group that won't be eligible to declare for the draft until 2017. An athletic wing with a terrific body, Mushidi is a strong, multi-positional defender who has an intriguing, but unpolished skill-level offensively, Mushidi was born in Belgium but grew up in Germany before playing this season in France, which ended in some turmoil. Averaging 17.2 points over 29.7 minutes per game for Strasbourg's Espoirs team and helping Germany to victory at the Albert Schweitzer Tournament (where he was named MVP), this will be an intriguing glimpse of what Mushidi can do against more mature players for the NBA personnel in attendance. He is rumored to move from France to Serbia next season to play for Mega Leks, taking the same route that Timothe Luwawu did this year with great success.
Read full article

Strengths:
-Tremendous physical profile. Not terribly tall, but has no neck, so plays bigger than his height.
-Extremely long arms and big hands
-Excellent frame. Chiseled despite his age.
-Terrific athlete. Fluid and explosive with a quick first step
-Multi-positional defender. Guards 1-4 at this level
-Plays with huge energy. Extremely active. Gets in stance and moves his feet very well
-Closes out on shooters impressive with his long wingspan
-Too strong to get posted up by power forwards
-Very good in transition
-Can create his own shot in the half-court
-Shows some ability to operate at different speeds. Played some pick and roll
-Good passer. Finds open man in drive and dish situations. Has a feel for the game
-Quick, compact shooting stroke. Has good potential as a shooter.
-Can make jumpers with feet set and off the dribble.
-Throws ball in basket with natural instincts from different spots on the floor
-Plays with confidence and swagger. Not afraid to get in opponents' face
-A year younger than competition here. Turned 17 in June.

Weaknesses:
-Stands somewhere between 6-4 and 6-5. Ideally would grow another inch or two
-Not the most consistent shooter at this stage. Only hit 30% of his attempts at both the U16 and U18. 69% career free throw shooter in FIBA competitions
-Needs to elongate his shooting stroke. A little bit rigid at this stage
-Advanced ball-handling skills still a work in progress. Best in a straight line right now
-Only converted 31% of his shots around the basket in the half-court at U18s. Didn't make up for it by getting to the free throw line a ton either
-Needs a coach that will reel him in a bit and help him harness his intensity/calm him down. Plays with so much emotion he can get out of control and force the issue at times. Doesn't always channel his energy in the best way

Outlook: Physical specimen with impressive versatility on both ends of the floor. Was very up and down throughout the tournament, but had some great moments that hinted at things to come down the road. Mother is from the Congo. Father from France. Born in Belgium. Grew up in Germany. Will play for Strasbourg's junior team next year. Will have to play as one of Strasbourg's five foreigners if they want him on the senior team down the road, unless JFL rule is repealed in France or he obtains JFL status in four years time.
Read full article

Jonathan Givony
@DraftExpress
An interview with 6-5 German wing Kostja Mushidi at the 2015 FIBA U18 European Championship in Volos, Greece.