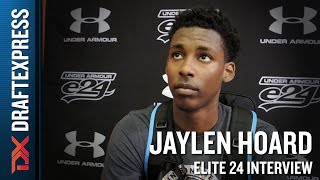 Strengths
-Excellent size for the wing at 6'8. Big enough to play some small-ball power forward, which could make him a real mismatch
-Fluid player. Quick off his feet
-Good frame that should fill out in time. Strong upper body
-Very long arms
-Can grab a rebound off the defensive glass and push the ball in the open floor. Long strides in transition
-Powerful first step. Deadly in short-iso situations
-Draws tons of fouls and gets to the free throw line at a great rate (over 10 per-40 in Zaragoza)
-Uses eurosteps and other fancy footwork moves to his advantage
-Can find the open man off the dribble. Solid court vision. 4.7 assists per-40
-Has a good looking stroke from the perimeter. Ball comes out of hand nicely. Has soft touch
-Doesn't have the most fluid mechanics, but throws the ball in the basket consistently regardless, which is a good sign
-Makes shots from all over the floor, both with his feet set and off the dribble

Weaknesses
-Good, not great athlete. Lacks a degree of fast-twitch explosiveness vertically and off the bounce for a top-shelf prospect
-Lower body needs work. Skinny calves and ankles
-Ball-handling skills are a work in progress. Averaged nearly 5 turnovers per-40 in Zaragoza.
-Doesn't get very low with his handle. Doesn't change speeds with the ball. Still has a ways to go to become a high-level shot-creator
-Very limited driving and finishing with his left hand. Avoids using his off hand at all costs
-Tends to avoid contact at times around the rim. A little bit soft with his approach
-Capable 3-point shooter but not consistent yet. Career 32% for 3 in DX database (37 games).
-Dips the ball unnecessarily below his knees on the catch, slowing down his release. Jumper isn't very fluid at this point
-Sometimes looks like he's operating at half speed. Lacks a degree of nastiness. Tends to disappear at times
-Very reactive on the floor. Gets down on himself easily. Not a next play guy
-Has the tools to be an excellent defender but isn't there yet. Doesn't sit down in his stance. Upright. Lackadaisical in his approach

Outlook Had a tremendous tournament averaging 33 points, 8.5 rebounds and 4.7 assists per-40, confirming himself as one of the top talents in the 1999 age group, certainly amongst Europeans. Elegant player with plenty of virtues and flaws that can be corrected in time. Still figuring out how to use his talent consistently on both ends of the floor. Will be interesting to see how his mentality evolves in time. Moving to a high school in North Carolina next season and may be on the college track long term.
Read full article

The Top Ten Performers at the 2016 FIBA U17 World Championship

Hoard was one of the most productive prospects in Zaragoza, often overwhelming teams with his combination of excellent size and polished skill-level. At 6'8 with long arms and a solid frame, Hoard was most effective using his size and improving ball handling skills to get to the rim on straight line drives and dominate games in transition. Hoard showed flashes of his athletic ability, and although he is not the most explosive leaper he is fluid in the open floor and quick off the ground, showing particularly good instincts on the offensive glass. He is an improving outside shooter with solid mechanics and balance who showed the ability to knock down contested outside shots, but could benefit from a quicker release. His pull up game off the dribble could be improved, as he often settled when he could have attacked where he was at his best. He has the ability to really influence the game on the defensive end with his length, and he showed that with his ability to get in passing lanes.
Hoard spent the past two seasons at famed INSEP Academy in France, but is transferring to Wesleyan Christian Academy in North Carolina for his junior season. Hoard, who was the MVP of the 2015 Jordan Brand Classic International game, will get a new challenge for his upcoming Junior season as he moves to the United States and will surely be on the radar of high-level Division I programs.
Read full article

Mike Schmitz
@Mike_Schmitz
Jaylen Hoard, 6-8, SF, Castelnaue Le Lez France, 1999
Strengths
-Excellent physical attributes. Projects as a big wing. 6-8 with long arms, big hands and a fairly developed frame that should continue to fill out in time.
-Solid athlete. Very fluid. Not overly explosive or quick but moves very well. Quick off the floor.
-Nose for the ball. Crashes the offensive glass.
-Potential as a spot up shooter. Sound mechanically. On balance.
-Upside on defense given his physical tools. Moves well laterally. Makes plays in the passing lanes with his length.
Weaknesses
-Doesn't show much in terms of shot creation. Average ball-handler. Not going to pull up off the dribble. Straight line driver. Has the potential to create as his handle improves.
-Good not great athlete. More fluid than explosive at this stage.
-Has potential but isn't quite a knockdown shooter. Doesn't get his shot off all that quickly.
-Can be a bit passive at times. Tends to blend in for stretches.
Outlook It didn't take long for Hoard to stand out amongst the rest of his peers given his tremendous physical attributes. While Hoard didn't have a ton of
wow moments throughout the week, he made plays on both ends during the game on his way to winning Team MVP. Hoard was one of the best long-term international prospects at the Jordan Brand Classic and is absolutely someone to follow. Should he decide to go the college route, the 6-8 wing should be considered for the highest levels.
Read full article