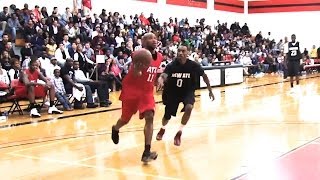 Jonathan Givony
@DraftExpress
After an outstanding ACC tournament, leading his team to the finals and a pretty nice seeding after being on the bubble just a week ago, Jack is looking to boost his stock even more with an excellent NCAA tournament. He is tournament tested already, taking Georgia Tech on his back all the way to the finals last year when they lost to UConn. How far Tech gets is completely up to Jack and exactly how much of the offensive load Paul Hewitt decides to put on his shoulders. Playing the way he has all year long will cement his place in the lottery and further silence the critics who say that he is not a pure PG (ridiculous if you've ever watched him play) and can't shoot (again a ridiculous comment considering his stats this year). Jack's heroic performance against Duke in the ACC tourney finals wasn't quite enough to get the Jackets the trophy, but only further proves the caliber of player that he truly is.
Read full article

Strengths
Possesses great size for the PG position at 6-3 with an excellent body that he always keeps in top notch shape. Very physical, strong and tough, both mentally and physically and uses that to the fullest on both ends of the floor.

Has very good PG skills; good court vision, nice ball-handling skills with both hands, and the size to see over the top of defenses. Jack plays the game with extreme confidence. He isn't the flashiest passer in the NCAA, which is why you don't see or hear his name nearly as much as he deserves, but he knows where his teammates like the ball and makes smart and efficient passes to put them in position for the easy basket. Jack is an assistant coach on the floor who is constantly directing his teammates and telling them where to position themselves on both ends of the court. He's a great playmaker who reads defenses well and knows how to run his team's offense in the half-court as well as excelling in transition. He appears to be a natural born leader who will gain his teammates respect by leading by example. He is very unselfish, almost to a fault at times, but this shouldn't be much of a problem at the next level. He has very good shot selection, hardly ever taking bad shots out of the context of the offense and is shooting over 50% for the year.

What makes Jack stand out a bit in this excellent class of PG's in this draft is his defense. He is probably the best defensive PG in this draft along with Aaron Miles, but has more potential at the NBA level with this skill because of his excellent size and body. His footwork is absolutely fantastic and he never takes off a possession. He'll get right in the grill of his opponent and won't give him an inch. He is very physical and always plays the game with a lot of intensity, not having any problem getting scrappy or taking the charge. He has good anticipation skills and excellent hands, which makes him a constant threat in the passing lanes. He will not risk his defensive position to come up with the steal like other PG's in this draft who average a little higher in the steals category. He's also a very good rebounder for a PG, averaging 5.5 for the season. Georgia Tech is the best defensive team in the ACC and Jack is a huge part of that.

Offensively, Jack is a very complete and versatile player. He can score from anywhere on the court, but doesn't force the issue. His bread and butter is the drive and dish, but he's not afraid to take the ball all the way to the basket and finish strong even with contact, slashing to the hoop with reckless abandon and little to no regard for his personal safety. He is very skilled in this aspect and you'll rarely see him lose his focus and miss once he's in the lane. He has a knack for getting to the basket despite the fact that his first step isn't out of this world, relying more on his strength, footwork and smarts to spin and dice his way through the lane, rather than just his above average athletic ability. He can also pull up quickly and hit the one handed floater or nail the mid-range jumper with good accuracy, which compliments his in-between game quite well. He has developed a nice post-up game to better compliment his size and strength at the PG position, once again thanks to his strength and footwork. He is almost automatic from the free throw line, hovering around 90% for most of the season. While he has all the attributes you can ask for out of an NBA PG, he also shows some potential at the 2 guard spot as well, even defensively for spot up minutes if needed. His off the ball movement is excellent, and while he doesn't shoot too many of them, he's over 40% for the year from behind the arc as well. He is a clutch player who wants the ball in his hands at the end of the game.

Off the court, Jack is an intelligent, humble and hard working kid with exactly the type of personality you want to see out of a guy you are investing millions of dollars in. His work ethic is second to none and you can tell that just by looking at his rapid improvement in all aspects of the game since his freshman season, but especially at the free throw line (improved by 20%) and from behind the arc (from 28% to 41%). He is a student of the game (and an excellent student in the classroom) and is always looking to make himself better.

Weaknesses
Jack doesn't really have any uncorrectable weaknesses that really limit his NBA potential. The worst thing you can say about him is that he is most likely just an extremely solid role player on the NBA level, not a star that you build your team around. He does a lot of things extremely well, but nothing really super, except maybe his defense. He's doesn't look like a potential 20 point per game scoring PG, but that might be because he's a lot more concerned with moving the ball around and keeping his teammates happy than his own personal stats. As mentioned earlier, he is unselfish to a fault sometimes. He's not the sexiest prospect in this draft, there are others who are faster, have better court vision, can jump higher and maybe have more upside, but no one is more solid in all aspects of the game like Jack is.

Something that's always been considered a big weakness of his is his perimeter shooting. Jack has worked extremely hard on that aspect of his game, practicing between 500-600 shots every day in the offseason to become a very respectable shooter now, around 41% for the year at the time of this report, which is ironically exactly what J.J. Redick from Duke is averaging from downtown. Jack doesn't jack up nearly as many 3's, though, attempting about 3 Â½ per game.

His assist to turnover ratio is probably the biggest concern amongst Jack's critics, and that is indeed something that he needs to improve on. 4.5 assists compared with 3.5 turnovers isn't going to win you the Bob Cousy award, although he is a finalist for it. While there is no doubt that Jack needs to be more careful with the ball, there are several factors contributing to this stat. First off, he plays on the most defensive oriented team in the ACC, they are #1 in all defensive categories and last in field goal attempts. What that should tell you is that Georgia Tech uses up almost the entire clock on most of their possessions, and when the clock is in single digits the man responsible for creating and getting the shot off is usually Jarrett Jack. He also sometimes shares the PG duties with the 5-9 ultra athletic Will Bynum (comes off the bench and plays about 25 per game), who is better at creating his own shot while the drop-off at SG with Jack isn't that large. He also doesn't have the same caliber teammates that many of his fellow draft prospects do, especially Raymond Felton, Chris Paul and Deron Williams. Often you see him make a pass that should have been caught and converted to a made basket, but unfortunately for him he plays with three front court players-- Muhammad, McHenry and Schenscher-- who (how can I say this nicely?) have hands that sometimes seem like they are made of stone.

That doesn't mean that Jack can't improve in this area, he definitely needs to work on learning when to up the pace and when to slow down, he sometimes gets a little ahead of himself like almost every PG in America not named Deron Williams.

Jack has a tendency to get down on himself when he makes mistakes, he holds himself to a very high standard, and when things aren't going well he gets a little passive offensively, although according to Georgia Tech's coaching staff that is beginning to improve.

Athletically, Jack has more than enough to get by in the NBA, but he can't be labeled as a freak.

Outlook
Age wise, Jack should be a senior, and if he was European he would be automatically eligible for this draft. The reason for that is he spent a year in prep school before college. Some may say that his potential is a little more limited because of that, but it's going to put a little more pressure on him to declare this season.

Regardless, Jack looks physically and mentally ready for the NBA. The only scenario which I could imagine him not testing the waters this year would be if his team doesn't make the NCAA tournament (his team is on the bubble right now) or if they get in but lose in the first weekend. The disappointment alone might be enough to bring back the ultra competitive Jack for another season.