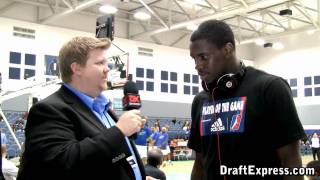 Matt Williams
@DraftExpress
Jamine Peterson wanted to be a trendsetter, electing to leave the Big East after being dismissed from Providence for violating team rules following an impressive campaign in which he averaged 19.6 points and 10.2 rebounds . Instead, he's sitting at home right now.

The 22-year old combo forward with two years of remaining NCAA eligibility signed a modest contract with Kolossos Rhodes in Greece this summer, but was released after just a month into the season after the team lost three games in a row.

Jamine experienced one of the realities of European basketball, his agent Mike Naiditch told us via text message. Losing teams don't have patience.

Watching the footage of Peterson's play in Greece, it's pretty clear that he struggled with many of the things American rookies have problems with in their first experience playing overseas: the physicality of the European game, a lack of respect from local referees, the adjustment from being a first option in college on an incredibly high-paced team to a spot-option in a much slower tempo, and difficulties on the defensive end of the floor. These are not unique concerns, particularly when discussing a player with just two years of college basketball experience underneath his belt.

Still, his excellent physical tools, unique shot-creating ability and rebounding skills continued to shine through, and it's likely that if Kolossos had the time and patience to work through these issues, Peterson would have been able to show the qualities that made him such a productive performer in the Big East.

Now, Peterson is back home in New York, and he'll need to find a great place to finish out this season, as he has almost no margin for error. Signing in Europe made him automatically eligible for the 2011 draft, but he probably couldn't be any further off the radar of NBA scouts than he currently is.

According to Naiditch, Peterson will soon decide between another team in Europe and the D-League.

D-League teams at the top of the waiver priority list should take notice, as Peterson could be an absolute force at both the 3 and the 4 spotssomething along the lines of Othyus Jeffers of Iowa, but possibly with an even higher skill-level. He'll need to develop the same bulldog mentality Jeffers brings on the defensive end, but should be an extremely productive inside/outside threat and offensive rebounder nonetheless.

In addition, Peterson should draw a good amount of attention as a potential NBA draft pick, similarly to Latavious Williams last year, something that clearly benefited both the Tulsa 66ers that developed him and the D-League itself.

Peterson will need to decide to forgo the prospect of making better money in Europe for the sake of a looser leash and far better exposure to NBA decision makers in the D-League first, though.
Read full article