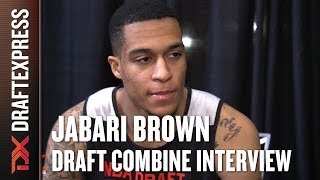 In his first full season with the Missouri Tigers, Jabari Brown had a breakout year, finishing his redshirt junior campaign on the SEC All-Conference First Team, while averaging 21.7 points and 4.8 rebounds per 40 minutes pace adjusted. Entering the draft with a season of eligibility remaining, the 21 year old Brown is coming off a productive season even if his team did not make the NCAA Tournament.

When we looked back at Brown's sophomore season with the Tigers, where he entered as a mid-season transfer from Oregon, he was little more than a spot-up shooter. He took on an expanded offensive role this season, increasing his usage rate from 20.6% to 26%, while simultaneously increasing his true shooting percentage from 58% to 63% which rates fifth among shooting guards in our top 100 prospect rankings.

Brown is still an excellent spot up shooter, making 39.4% of his catch and shoot opportunities. He's got deep range and terrific mechanics, making 41% of his overall 3-point attempts on a large quantity of attempts, which is his biggest selling point as a NBA prospect. Despite his tremendous shooting ability, he also made significant improvement this season in terms of his ability to attack defenses off the dribble by showing much more confidence in putting the ball on the floor when the three point shot is not available. He did a great job of using his strong frame to initiate contact around the basket this season, as his 8.3 free throw attempts per 40 minutes ranked eighth among all prospects in our top-100.

Although he was still primarily a jump-shooter this season (67% of his half-court attempts came on jumpers, down from 84% the year before), he showed an increased willingness to attack the rim, where he converted a solid 59% of his attempts around the basket, according to Synergy Sports Technology. Question marks remain about his ability to continue to do so effectively at the NBA level considering his average physical tools, but Brown can no longer be considered strictly a one-dimensional player, which certainly helps his draft prospects.

When Brown's penetration was cut off, he also showed more confidence in pulling up off the dribble, shooting 40% on 58 off the dribble jump-shots, according to Synergy Sports Technology. He made good decisions as to when to attack the rim and when to pull up for a jumper, which will be crucial when he plays in the NBA, as he will not always be able to beat his defender off the dribble and finish efficiently around the rim.

While Brown was fairly prolific in creating his own offense, he was equally poor at creating for others off the dribble, as he generated an assist on just 11% of his possessions, the second worst rate among shooting guards in our top-100 prospect rankings. While he didn't turn the ball over too frequently (13% of possessions), he is very single-minded in his approach. His pure point rating ranked dead last among Top-100 shooting guard prospects, which may make it difficult for teams to consider him a combo guard prospect, as his height suggests he might need to be. Even in a smaller role last season, Brown posted similar numbers, which indicates this probably isn't a fluke.

Last measured at 6'3 in shoes nearly four years ago, Brown's size is a bit disconcerting if he hasn't grown since then (a legit possibility as Missouri lists him as being 6-5), as he may have trouble getting his shot off against taller defenders, especially since he doesn't have superb length to complement his lack of size. Brown does possess above average speed and agility, which should help him continue to improve his ability to make plays off the dribble by being able to beat defenders with his first step.

On the defensive side of the ball, Brown's potential is limited due to his size and length, as he will likely have trouble contesting the jump shots of taller players or defending them in the post. Further compounding the issue is his often nonchalant demeanor on this end of the floor, as he often looks lackadaisical in his approach heresomething that plagued Missouri's entire squad this season (KenPom 32nd most efficient offense, 160th defense). With better coaching and an increased focus on stopping opponents at the pro level, however, Brown's strength, quickness and solid feel for the game could allow him to improve his ability to stay in front of opponents or funnel them to the correct spots on the floor toward the help defense.

Projecting ahead to a potential NBA career, Brown has made his case to teams by becoming a more well-rounded offensive player. His three point shooting (41% last season) will be a necessary skill for him to earn playing time, but he should be able to carve out a niche if he can improve his defense and do a better job of staying within himself and creating offense for teammates. Brown has the potential to be a complementary offensive piece on the right team and could be drafted as high as late in the first round or somewhere in the second round to a team looking for a player with his skill-set.
Read full article

Jabari Brown joined the Missouri Tigers as a mid-season transfer last year, leaving the University of Oregon after starting two games in 2010-11. He enters this season as a redshirt junior and will attempt to replicate the success he found in a partial season with Missouri over a year.

In 25 games last season, Brown averaged 13.7 points per game, shooting 46% on two pointers and 36.6% on three pointers in 32 minutes per game. The 6'5, 215 pound Brown has nice size for a shooting guard and decent speed, especially when moving laterally in the half-court.

Brown was almost exclusively a jump shooter last season, as 84.4% of his shots were categorized as jump shots by Synergy Sports. He was a solid shooter in catch and shoot situations, where he made 38% of shots, averaging 1.13 points per possession, according to Synergy Sports. He has a great shooting motion and elevates well to shoot over taller defenders.

Brown is not much of an offensive creator for Missouri last season, rarely getting to the basket in the half-court and seeing most of his looks coming in catch and shoot situations, only attempting 31 total off the dribble jumpers last season. He often struggled to square himself to the rim in pull-up situations effectively, which caused many of his attempts to come while off-balance. He was also unable to create offense for his teammates, as his 1.6 assists per 40 minutes pace adjusted ranked as one of the lowest among shooting guards in our database.

Around the rim, Brown was largely untested, as he attempted only a handful of shots inside the paint last season. He was a below average finisher in this small sample, shooting 46%, as he does not possess the size or explosiveness needed to finish at a high rate in traffic. He doesn't shy away from contact, as his 5.0 free throw attempts per 40 minutes pace adjusted is solid for a player who plays off the ball most of the game, but he has yet to show the ball-handling ability and creativity you'd hope to see from a NBA shooting guard prospect.

Defensively, Brown is a tireless worker and his physical tools make him a strong defensive player. He has above average agility and lateral movement to stay in front of quick players and enough strength at this point to hold off bigger players. On the ball, he moves his feet exceptionally well to not allow dribble penetration to beat him. He is just as impressive off the ball, constantly moving to cut off the offense while using his quickness to close out on shooters. Scouts will appreciate that he can add value to a team on the defensive side of the ball on those nights when his shot is not falling, even if his lack of size is somewhat concerning at his position at just 6-3 in shoes.

This season, scouts will want to see Brown provide something other on offense than simply catching and shooting. With the loss of several high usage players, including Phil Pressey, Brown should have the opportunity to play with the ball in his hands more, showing whether he can create offense off the dribble or not. As he steps into a larger offensive role, he'll need to show the same commitment level on defense he did when he had to expend less energy on offense last season.

As it stands now, Brown's shooting alone is not enough for him to be a NBA draft prospect. Brown showed the potential to do more than that at the high school level, so if he adds a few wrinkles to his offensive game this season, he could begin to make more of a case for himself.
Read full article