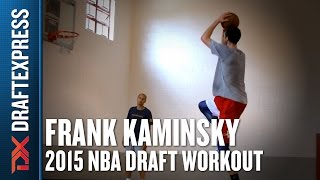 DraftExpress
@DraftExpress
-Frank Kaminsky: The Wisconsin star measured 6'11.75 without shoes to go along with a middling 6'11 wingspan and a 231-pound frame. Those numbers are similar to those of Cody Zeller (6'10.75, 6'10.75 wingspan, 230 pounds) and better than Kelly Olynyk, who measured 6'10.75 without shoes and a 6'9.75 wingspan. Kaminsky lacks outstanding length and was the only player in attendance to post a wingspan to height ratio below 1.0, but his height ranks prominently among similarly skilled big men in recent memory.
Read full article

Jim Hlavac
@DraftExpress
Discussing a variety of topics with Frank Kaminsky in Santa Barbara, including what he's working on on and off the court, his time at Wisconsin, and how he's looking forward toward the pre-draft process.

(Video may not load with Internet Explorer. Use Chrome or Firefox)
Read full article

Arguably the most improved player in college basketball the past two years, Frank Kaminsky swept all conference and national player of the year award honors after leading Wisconsin to the NCAA Tournament Championship game. He went from averaging 1.8 points per game as a freshman and 4.2 as a sophomore to 18.8 as a senior and the clear-cut most productive player in the NCAA, with a top-ranked PER of 35.5.

Kaminsky has excellent size for a power forward at 7-0, with a frame that has improved substantially over time and still has some room for growth. While not a fast-twitch, incredibly explosive athlete, he is an extremely fluid, agile and coordinated big man, who runs the floor well and shows great mobility for a player his size, as evidenced by his strong rebounding, blocked shots and steal numbers.

What makes Kaminsky a unique prospect revolves heavily around the versatility and efficiency he displays on the offensive end. He is a matchup problem every time he steps on the court, an extremely skilled 7-footer who opposing teams need to game-plan for at all times. His ability to handle, shoot, pass and score from anywhere on the floor gives him terrific flexibility to be utilized in different lineups and half-court sets, which is increasingly valuable and sought after in today's NBA game.

Kaminsky is a deadly outside shooter, converting 42% of his 3-point attempts, which is the best rate in the history of our college basketball database (dating back 14 seasons) for a 7-footer with at least 100 attempts. His shooting mechanics are excellent, especially with his feet set, and he also has the added bonus of being able to come off screens, which is extremely difficult to stop from a player his size. He is very intelligent moving off the ball, cutting into open spaces with great timing, and does a nice job of keeping defenses guessing about what he will do in the pick and roll, as he's capable as both a roller or popping out to the 3-point line.

If a defender closes out too aggressively on his jumper, Kaminsky has no problem putting the ball down and making his way to the basket off the dribble, where he can finish with soft touch and using either hand. He is a very good ball-handler for a 7-footer, showing excellent footwork and body control weaving through the lane, often mixing in creative spin-moves showcasing his terrific coordination and skill-level.

He can attack slower players off the dribble with a solid first step in isolation or even pick and roll situations as the supersized ball-handler, which makes him difficult to contain in smaller lineups where he's utilized as a stretch-5, something he's big enough to pull off frequently.

The key to this offensive versatility is not only Kaminsky's skill-level, but also his outstanding feel for the game, as he lets the game come to him and has no problem blending in and playing a role. He sees the floor well and can execute a variety of different passes from all over the floor, which will make it very easy for a team to run offense through him, as he can be trusted to make good decisions with the ball.

Kaminsky turned the ball over on an incredibly low 9.9% of his possessions this season, the third best rate among players currently projected to get drafted, while posting an 18.4% assist percentage that is better than many guards. His .47 PPR will be the best rate ever for a drafted player standing over 6-9 in the history of our database. He's an extremely unselfish player, possibly to a fault at times, as he tends to pass up good shots on occasion as part of Wisconsin's extremely patient/deliberate offense.

While he's unlikely to enjoy quite the same caliber of success in the post in the NBA as he did in college, Kaminsky is a capable option with his back to the basket, especially at the power forward position where he'll often be defended by players much smaller than him. He has excellent footwork here and the ability to score with either hand, and is not afraid to use a couple of pound-dribbles to move his man around and get better position. Kaminsky's post-game was actually his most frequent source of production at the college level, responsible for nearly a third of his touches in the half court, and a place where he found a great deal of success, converting 54% of his field goal attempts according to Synergy Sports Technology. With that said, he does have some difficulties finishing over length at times due to his average combination of strength, length and explosiveness, so it remains to be seen how effective he'll be in this area against better competition.

Beyond that, there are some question marks Kaminsky will have to answer as he makes the transition to the NBA game. The biggest one is on defense, where he was mostly utilized as a center by Wisconsin, but will likely need to adjust to guarding smaller players on the perimeter at the power forward spot. Stepping out and staying in front of quicker players is often challenging for a 7-footer, and Kaminsky's average length and explosiveness won't help much on that front.

He does have some good tools he can utilize here to combat that, as he already shows very nice agility covering space in the pick and roll, with solid lateral quickness, strong footwork, and good timing to help get the job done. He's a competitive player who shows good intensity and who will almost certainly work as hard as he can to maximize his deficiencies. The fact that he developed into an excellent defensive rebounder by his senior year (8.8 per-40, sixth best in the DX Top-100) is clearly a good sign.

Continuing to add weight will be beneficial for Kaminsky, as he struggled quite a bit as a post-defender at times at Wisconsin, giving up deep position and getting backed down by stronger players inside the paint. He also wasn't much of a rim protector in college (1.9 blocks per-40), due to his average reach and vertical explosiveness, which might limit his ability to see extended minutes at the center position.

Kaminsky has improved by leaps and bounds over the last four years thanks to Wisconsin's terrific player development program, which may lead some NBA teams to question just how much room he still has left to grow as a player. He is the second oldest player currently projected to be drafted in the first round, so there may be an element of what you see is what you get with him. With that said, what you get is a terrific basketball player, with a very impressive combination of skills for a player his size, which is increasingly difficult to find, and highly sought after at that. Look for Kaminsky to get invited to the NBA Green Room and hear his name called very early on draft night, and then carve out a long and successful NBA career.
Read full article

Mike Schmitz
@Mike_Schmitz
A detailed video analysis by Mike Schmitz of how Duke's Jahlil Okafor and Wisconsin's Frank Kaminsky performed in their head to head matchup this past week in Madison.