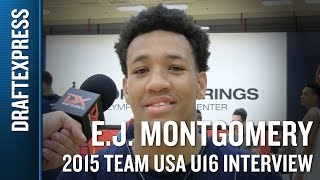 Mike Schmitz
@Mike_Schmitz
After a very strong summer of 2014 and a solid USA Basketball Development camp, where he showed to be one of the most talented players in his high school class, E.J. Montgomery (#3 Future150) seems to have hit a bit of a rut lately. He was unsurprisingly in the first group of players released from this roster, after a very uneven showing confirming many of the concerns scouts had about him coming in.

First the positive, as there is absolutely no doubt that Montgomery is oozing with talent. He stands over 6-9 in shoes, has a long 7-1 wingspan, a terrific 200-pound frame, and is a very smooth athlete, moving extremely well for a player his size. He is very good in transition, capable of handling the ball in the open court and making some nice passes ahead at times. He also has good touch on his jumper and as a finisher around the basket, leaving some room for optimism in this regard down the road.

Montgomery's overall skill-level and feel for the game is very much a work in progress, though, as he seemed to have trouble picking up on some of the drills and half-court plays he was asked to execute at times. His ball-handling ability in the half-court is crude, and he struggled badly with his jumper for most of the week, airballing a number of shots, and seemingly shooting it differently every time, often with a very low release point, and rarely being on-balance.

The first impression you get from Montgomery is a little more positive than the overall product, as an oversized guard with a great frame and very nice versatility, but he clearly has a ways to go to reach his full potential. That's not surprising considering his age, but he didn't show a great deal of progress this past year. He set a very high bar for himself considering his tremendous talent-level, so hopefully he can continue to improve and reach his very high ceiling.

We talked to him about his development as a basketball player and much more in the following interview:

Jonathan Givony
@DraftExpress
Interestingly, Bagley is almost exactly the same size as E.J. Montgomery, a player he'll be vying with for the top spot in 2018 recruiting rankings down the road. At 6'9 with a 7'0.5 wingspan and a 204-pound frame, Bagley and Montgomery have eerily similar physical profiles. While Montgomery has ample size to play inside, especially considering he's likely to grow as he's still only 15 years old, he spends most of his time on the perimeter at the moment. His basketball IQ and understanding of the game is very much a work in progress, as he struggled to pick up some of the drills, but he's incredibly skilled and fluid for a player his age, showing the ability to make deep perimeter jumpers with ease.
Read full article