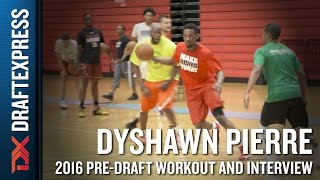 A lightly recruited player from Canada, Dyshawn Pierre turned heads as a 17 year old at the U-19 World Championships, which helped him land at Dayton. Pierre returns to Dayton for his junior season hoping to help the Flyers back to the NCAA tournament after their run to the Elite Eight.

Pierre is an excellent three point shooter, shooting 40.9% on sixty-six shots last season, down slightly from his 46.2% his freshman season but still a strong percentage for a shooting guard. His fundamentals are a bit wonky, as he has a very narrow stance and an unconventional release point. His form has worked for him so far but he will need to show he can use this to extend his shooting to the longer NBA line.

Measured at 6'6, Pierre has nice size and length for a shooting guard but has a thin frame at just under 200 pounds. He will need to add bulk to withstand the physical nature of the professional game, which will help him in all areas of his game. Pierre is a nice athlete, demonstrating nice speed and explosiveness at times, but didn't show he had any elite athletic tools. He may be able to hold his own but will struggle to match the athleticism of NBA players on a regular basis.

While Pierre has shown some nice penetration skills in transition, using the open court to his advantage to slice through the defense while showing a variety of skills to get to the rim, Pierre has been unable to provide the same dribbling skills in the halfcourt which limits his effectiveness. When defenses take away his shooting space, Pierre has been unable to create for himself or his teammates off the dribble. He is a straight line driver in the halfcourt but doesn't have a quick enough first step to beat the defense on a regular basis.

His inability to create off the dribble also hurts his ability to create for his teammates, as he posted just 2.5 assists per 40 minutes pace adjusted last season. He was unable to draw defenders off the dribble which didn't leave many passing lanes for him. When he then got in trouble because he couldn't beat his defender, he was forced into turnovers, committing 2.4 per 40 minutes pace adjusted which lead to a -1.96 pure passer rating. He has shown some nice skills in the open court so if he can do the same in the more compressed half court setting, he will be able to have a second way to score and create for his teammates.

Pierre has some strong defensive potential with the ability to guard multiple positions. He is a hard worker on this end and uses his height and length to shut down penetration and contest jump shots. He may struggle to replicate his success against quicker guards but he can use his long strides to funnel his opponent to the right position to slow them down.

He can also contribute defensively by rebounding, as he commits to this role on both ends and was one of the leading shooting guards in rebounding last year. His 4.8 defensive rebounds per 40 minutes pace adjusted was among the leaders for SGs last season while his 3.6 offensive rebounds per 40 minutes pace adjusted ranked sixth among SGs. He has a nose for the ball and reads it off the rim well, allowing him to be first to the rebound even among bigger players.

While Pierre has some interesting athletic tools and showed an ability to stretch the floor, he will need to show more this season to become a draft candidate. Being able to provide more value offensively than just three point shooting will be imperative and becoming more comfortable off the dribble in half court situations is one area he can demonstrate some increased value. Dayton does lose leading scorer Devin Oliver and the duo of Pierre and Jordan Sibert will be asked to do more offensively to fill that void. He will be someone to keep an eye on this season to see if he added anything offensively which combined with his jump shooting and defensive potential, could see him move into more serious draft discussions.
Read full article

Dyshawn Pierre was one of the youngest players at this event at just 17 years old. Nevertheless, he emerged as one of the most productive players in Latvia, averaging a very efficient 17 points and 8 rebounds on 60% shooting from the field.We wrote about Pierre last summer after watching him at the U-17 World Championship in Hamburg already, and were already fairly impressed back then.

He has good size for a wing player at 6-6 to go along with a nice frame and excellent athleticism. On top of that, he's a major competitor on the defensive end, capable of guarding multiple positions and often battling fearlessly with players much bigger than him inside the paint, which helps explain his gaudy rebounding numbers.

Pierre seems to have improved offensively quite a bit since last year, particularly as a ball handler. He's now capable of creating shots for himself going left or right and scoring in both half-court and transition situations. Rarely one to go out of his element, Pierre kept his turnovers to a minimum and shot a high percentage from the floor, which is impressive considering he was two years younger than many of the players he was playing against.

The next stage in Pierre's development, and one that will likely ultimately decide what type of prospect he becomes long term, is his perimeter shooting. He did not make a single 3-pointer at this tournament and converted just 62% of his free throw attempts.

Because he plays high school in Canada, Pierre's college recruitment has been slow to develop -- his only scholarship offer at the time of the tournament was from Jacksonville University in the Atlantic Sun Conference, (according to Dave Telep). After a productive summer that has likely changed. Although we're not exactly sure to what extent.
Read full article

Jonathan Givony
@DraftExpress
An underrated prospect as far as his college recruiting hype indicates, Dyshawn Pierre was an instrumental part of the terrific showing Canada had here in Hamburg.

Showing excellent size for a small forward, with long arms and good athleticism, Pierre has the physical attributes needed to play at the highest levels of college basketball. He's got a nice frame and a pretty versatile game that revolves around his play on the defensive end at the moment.

Pierre is a competitive guy who can guard multiple positions. He really made his presence felt blocking shots and rebounding at a terrific rate, setting the tone nicely for his teammates. He's not particularly skilled at the moment, but he's a mature, reliable player who passes well and rarely turns the ball over. He was extremely efficient on the offensive end as well, which made it difficult for coach Roy Rana to keep him off the floor. He finished well around the basket, and he did a good job in transition and on straight-line drives. He clearly has work to do on his ball-handling skills and perimeter shooting. He knocked down just a handful of jumpers over the course of the tournament.

We'll have to see how Pierre's offensive game comes around to really get a feel for what type of prospect he is down the road, but he will surely be a hot commodity in recruiting circles as soon as more people take a look at him in the States.
Read full article