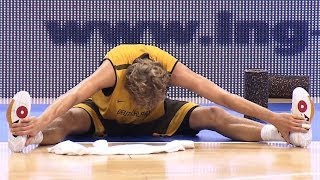 Eric Weiss
@DraftExpress
Overview: The most successful International player in NBA history. Has ridiculous size for his skill set, and solid athleticism to match. The native German is as versatile a player as there is in the game today. Has played in six All-Star games. Won the NBA MVP in 2007. Has improved in little ways throughout the latter part of his career. Doesnt always play with the same intensity, and lacks of a bit of a killer instinct, but his focus has improved during each of his seasons in the League.

Offense: Gets about a quarter of his offensive possessions as a spot up shooter, with another fifth coming from post ups. Another quarter comes from pick and rolls and isolations. Gets most of his shots as a jump shooter. Has a great stroke that is impossible for most players to block due to his size and high release point. Can knock down the three at a good clip (although his percentages are down this season) and hit fade-aways from almost any distance. Great ball handler for his size. Can bring the ball up the floor from time to time. Capable of driving off the dribble with either hand. Can take the ball all the way to the rim or dominate the midrange game. Good in the post as well. Uses a nice array of fakes to get open look underneath. Likes to turn over his right shoulder and then fade away. Can finish consistently with both hands at the rim. Draws contact well. Gets to the line at a phenomenal clip, and shoots a great percentage once there. A poor offensive rebounder for his size. Tremendous passer for his height. Can really do it all offensively. Real team player. Hard to defend as an individual. It usual takes a team effort to shut him down. Seems to get somewhat passive at the end of games.

Defense: Average defensively, but Avery Johnson has pushed him to be slightly better. Has a tough time matching up with stronger players who can score with their back to the basket. Capable of stepping out and guarding players the face up. Can step out into passing lanes when he anticipates a pass. Doesnt take as many risks as he used to. Tries to go straight up when covering post shots, but will commit a foul from time to time. Will block shots solely based on his size. Length helps his aggressiveness rebounding the ball, where he is very solid on the defensive end. Hips are somewhat stiff, which makes it difficult to move tremendously well laterally. Mostly focused on the offensive end.
Read full article

Wojciech Malinowski
@DraftExpress
As arguably the biggest non-American NBA star in this tournament on an otherwise extremely weak team, everything will start and end for Germany with Dirk Nowitzki and his ability to take over games. Although the International game is one that is based on team play more than individual matchups, look for most of Germanys offense to revolve around getting Dirk in position to use his height to get his shot off in the spots he feels comfortable scoring from, while playing off the rotations he forces and the double teams he will surely draw.

Dirk will play the power forward position for Germany as he does for the Dallas Mavericks, and will be even more of a mismatch using all of his 7 feet of height, excellent mobility and coordination to put the ball on the floor, receive the ball in the mid-high post and just shoot over the top of his man with his deft touch and high release, or stroke the three pointer when the opportunity presents itself.

More than ever, though, he will have to show that he can first and foremost hurt his matchup inside the arc before he steps outside, much like he did this past season with the Mavs. This is a terrific opportunity for Dirk to show his always improving post up game, as few players anywhere in the world can stop him when he receives the ball with his back to the basket before spotting up for a quick fadeaway jumper.

Last summer, Nowitzki went out and solidified his spot as one of the top International players ever with an incredible showing at the Eurobasket tournament in Belgrade. Nowitzki led an injury riddled German squad, which most pundits had written off as marginal candidates to even make the quarterfinals, all the way to the finals against Greece, averaging a tournament high 26 points while pulling down 10 rebounds per game.

The way he carried that team on his back, while never forcing the issue or doing anything less than making everyone around him better, truly set the standard for showing us how a legit superstar can perform on a stage like this.

With the competition stiffening here in Japan, Nowitzki will likely have to repeat his incredible form from a year ago, even though he only had just a few weeks to rest after taking his team to the NBA finals and playing no less than 111 games (including preseason) in 9 months. Fatigue could play a big part in how far he can lead this German squad, since theyll need every drop of energy hell be able to muster up for them.

One reason for that is since helping his team out defensively and especially on the glass will be a must for Germany to reach the advanced stages of the tournament. Despite the challenged involved with playing with such a weak supporting cast, Dirk will also have to make his teammates better. No one wins games by themselves in the International game, but Germany and Nowitzki will come about as close as you can get.
Read full article