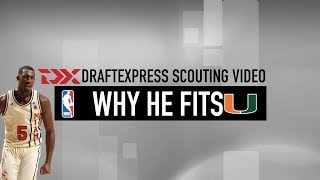 Why He Fits: The 3 and D label is thrown around quite casually nowadays, but Reed truly has the ingredients NBA teams are looking for in this role. He's 6' 5.5 with a 7' 0 wingspan and a projectable frame, is a very willing defender who competes and has versatility on that end (All-ACC Defensive Team), he spaces the floor comfortably (lifetime 37.8% from three on 646 attempts), and has a solid feel for the game. The young senior scored 1.65 points per possession on unguarded jumpers and is capable of knocking down one or two dribble pull ups if run off the line (76th percentile on pull ups). Operating as a role-player at Miami, attempting only 11.2 shots per game as a senior, Reed should be able to step in and defend his position, knock down open shots and play smart within the system early on in his career. With NBA size and length, some defensive versatility, a solid shooting stroke, and impressive intangibles, Reed has a great chance to hear his name called in the second round and has a chance to work his way onto a roster as a two-way wing.

Drawbacks: While fluid in the open court, Reed doesn't have the explosiveness to match his NBA tools. He plays below the rim in the half court and operates mostly at one speed off the bounce, evident by his lifetime 45% 2-point conversion rate. It's also fair to wonder how dynamic of a shooter Reed is. He's very capable with time and space, but tends to struggle when heavily contested - 1.65 PPP when open to 0.949 PPP when guarded.  Reed can also play with more of a mean streak at times on both ends of the floor, as he's not the most naturally assertive player in the world. Given some of his athletic limitations offensively (has very good feet defensively), Reed will have to shoot it efficiently in the minutes he does get, and make all the right reads in order to stay on the floor.
Read full article

Matt Williams
@DraftExpress
-Miami standout Davon Reed posted just average numbers in the athletic testing portion of the PIT, but his wingspan was measured at 7'0, a huge jump from the 6'4 ¼ he stood barefoot. He has similar length to the likes of Michael Kidd-Gilchrist, Luc Richard Mbah a Moute and Moe Harkless, which gives him nice positional versatility to go along with his career 40% 3P% and positive assist to turnover ratio. Among the longest perimeter players in this group, the versatility Reed demonstrated from the combo forward spot all year with Miami shined through at the PIT.
Read full article

Davon Reed missed the first three weeks of Miami's 2014-15 season after suffering a torn meniscus during offseason workouts. After returning in early December, Reed worked his way into the starting lineup, starting in 21 of the final 22 games for Miami and helping the Hurricanes rebound from a disappointing 2013-14 season.

Reed was measured at 6'5 in shoes at the LeBron James camp a few years ago, with an impressive 6'10.5 wingspan. That length, combined with a well-developed frame and good athletic tools provides Reed with considerable intrigue as a prospect, especially considering the potential he's shown as a jump shooter.

On the offensive side of the ball, Reed's primary contributions come from his set shot, which he hit at a tremendous clip last year. Reed made 45.7% on his 81 three point attempts last season and shot 46% on his catch and shoot opportunities per Synergy Sports Technology, a percentage which yielded 1.381 points per possession and placed Reed in the top 10% of college basketball.

Reed gets tremendous elevation on his jump shot and has range well beyond the college three point line. His shooting motion is compact, which combined with the elevation he gets allows him to get off accurate looks at the basket with little space. The overall sample size is small, so a regression wouldn't be all that surprising, but there's reason to believe Reed can be a plus shooter even with a larger sampling of attempts.

Reed also has a quick first step and long, rangy strides, which allows him to attack closeouts and get to the basket. He's a good athlete who can elevate around the rim, and has pretty good body control and touch around the hoop, although he doesn't yet appear to have confidence finishing with his left hand.

Because he's a relatively low-usage player, who gets shots primarily either behind the three point line or at the rim, Reed has a fairly high free throw rate at 47%. The combination of getting to the line  3.7 attempts per 40 minutes, pace adjusted, compared to just 8.0 field goal attempts per 40 minutes pace adjusted  and effective three point shooting gives Reed excellent efficiency. His 62% true shooting percentage placed him in the top-15 among all shooting guards in our database last season.

The rest of Reed's offensive game is still a work in progress, as evidenced by his extremely low utilization in Miami's offense. Reed attempted just 5.5 field goal attempts in his 27.5 minutes per game, with an extremely low 15.7% usage rate. Reed is an inconsistent shooter off the dribble, which limits his usefulness in the pick and roll, and lacks the advanced ball handling skills and creativity to create with regularity. For the most part, Reed's offense is limited to spot-up attempts, transition opportunities, and cuts to the basket off the ball.

Reed's athleticism and physical profile gives him a lot of potential as a defender, although right now he's inconsistent in his ability to turn that potential into production. Reed has the length and lateral foot speed to defend on the perimeter, and the size and strength to defend multiple positions.

The effort is there, which is a big building block for his long-term development, but he's going to have to improve his technique and decision making in order to reach his three-and-D potential. Reed can frequently be caught too upright and off balance, and can get burned on misdirection moves. He can also get caught roaming off the ball looking for steals or when committing to double teams, and leave his man wide open at times. All of these are correctable deficiencies.

The upcoming 2015-16 season is a big one for Davon Reed, who played his entire sophomore season at 19 years of age. Reed has some potential as a three-and-D candidate, something that is extremely valued in today's NBA. If Reed is able to show that the accuracy he displayed in his jump shot is sustainable with more attempts, round out the rest of his offensive game so he can offer more in the half court, and turn some of his immense defensive potential into consistent production, he could find himself on the radar as a prospect down the line.
Read full article