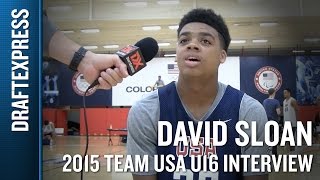 Strengths
-Floor general who plays with impressive poise for his age (turned 16 on May 26)
-Excels as a distributor in transition. Able to find rim runners/wings but also has the patience to hit the trail man or wait for the secondary break to develop.
-Displays good timing as a passer, making the help defender play him just enough before dropping it off to a teammate in stride. Above average court vision.
-Shows flashes of creativity as a passer.
-Smooth ball handler who mixes in combo moves and shows an ability to play at different speeds.
-Good first step and burst
-Isn't an elite athlete but did show some leaping ability as he almost threw down a pair of dunks in transition (missed one, fouled on the other)
-Capable spot up shooter with simple mechanics. Gets good rotation.
-Undersized at 5' 10 but has solid length for his height with a 6' 2.5 wingspan. Fairly wide shoulders for his size.

Weaknesses
-Lacks ideal size for a point guard prospect. Added 17 pounds from 2014 to 2015 but hasn't grown and is still 5' 10 167 pounds.
-Mostly a distributor and spot up shooter at this stage.
-Struggles to score in the paint versus length. Very reliant on his right hand around the rim. Average leaper off one foot. Would benefit from developing a consistent floater game.
-Can improve his pull up game. Not all that comfortable creating space to get to his jumper at this stage of his development. Shoots a set shot.
-Not the most vocal player. Laid-back demeanor. Isn't immune to making an occasional careless pass or conceding an open lane as an on ball defender.

Outlook In a world so often focused on early-entry draft prospects, David Sloan will be a breath of fresh air for any high-major program that snags him from Taylor Country High School in Kentucky. Much like a Parker Jackson-Cartwright at Arizona, Sloan projects as a four-year player who can handle, distribute effectively, make an open shot and provide point guard stability for high-major programs that so often experience a high rate of annual player turnover. Sloan showed signs of improvement from the last time we saw him (U16 Training Camp in June) and continues to trend upward as he matures physically and develops as a player.
Read full article