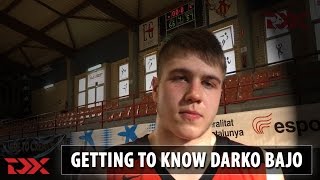 Strengths
-Impressive physical profile for a combo forward at 6' 9 with a near 7' 0 wingspan and an excellent frame.
-Good athlete who can play above the rim in space
-Strong straight line driver from the perimeter and the elbows. Has the frame to finish through contact. Best operating as a small ball four.
-Shows flashes as a shooter both off the catch and the dribble. Shoots a bit of a hard ball and is jump reliant, but shows some potential. Can make a spot three with time and space. Solid footwork on one-dribble pull ups in mid-range spots. Results based on confidence.
-Can punish switches with jump hooks on the block. Has push shots as well.
-Versatile defensively. Good feet when he sits down and digs in. Comfortable switching ball screens or defending wings on the perimeter. Has the tools to compete on the interior when he's motivated.
-Has some impressive moments rotating from the weakside for blocks. Can cover ground defensively.
-Possesses the type of two-way versatility teams are looking for in a combo forward
-Speaks perfect English

Weaknesses
-Very inconsistent in his approach. Introverted kid who doesn't interact with teammates. Goes into a shell when things don't go his way. Not nearly as aggressive as he could be. Doesn't always act like a great teammate, being more focused on individual success than team's.
-Doesn't have an elite skill. Checks a lot of boxes but isn't great in one area.
-A bit caught between the forward positions offensively. Handle has room to improve, mostly a straight line driver at this stage. Not going to play out of ball screens with much success.
-Inconsistent shooter. Ball doesn't always come out cleanly. Shoots a bit of a hard ball. Jump reliant. Better in mid-range spots than out to three.
-Feel for the game is a bit shaky. Plays with his head down. Struggles to execute the simple play. 1.1 assists and 4.2 turnovers per 40 minutes at ANGT. Needs to improve his ability to make the simple play and read and react to help defenders.
-Shows flashes of impressive defensive versatility followed up by low IQ plays. Doesn't always sit down like he could. Struggles navigating ball screens.
-Overall aggression really comes and goes. Will stand and watch on the defensive glass at times. Looks like a legitimate NBA prospect for stretches and just another guy the rest of the time.

Outlook
Bajo stood out immediately thanks to his prototypical physical profile and flashes of skill. Bajo appeared to be a little bit of a tease at times, however, as he leaves you wanting more from an aggression and consistency standpoint. When he's fully engaged and aggressive, he regularly proved to be the best player on the floor. When he's happy to blend in or struggling to handle adversity thrown his way, he hurts his team. Along with his somewhat rigid skill set, Bajo's mental approach will be the key to whether or not he maximizes his long-term potential. Bajo has tools and athleticism that you can't teach, and if he can improve his mentality and continue to refine his game, he'll set himself up to at least have a chance to play at the highest level. Bajo is expected to be with Cedevita for the foreseeable future, where the very NBA-privy, English speaking Bosnia native will hope to develop into a legitimate draft prospect.

Mike Schmitz
@Mike_Schmitz
Darko Bajo, 6-8, SF/PF, OKK Spars, Croatia, 1999 Strengths
-Good physical attributes for a European prospect
-Solid frame
-Good athlete
-Versatile offensive player.
-Can create his own shot from the perimeter. Mixes in spin moves impressively. Attacks closeouts aggressively
-Finishes above the rim
-Very good in transition. Handles the ball coast to coast
-Good feel for crashing the offensive glass and coming up with blocks. Nose for the ball.
-Solid passer and nice feel for the game overall. Reads the floor well. Has a good understanding of the game for a player his age.
-Shows decent feet guarding the perimeter. Gets in a stance. Tries to stay in front.
-Can throw the ball in the basket with nice touch
Weaknesses
-Somewhat stuck between the 3 and the 4. Will he grow and become a true 4? Or Can he become a complete perimeter player.
-What position is he best suited guarding?
-Has a tendency to fade away on his jump-shot unnecessarily. Somewhat of a streak shooter at this point
-Can improve his advanced handle
Outlook
Has some impressive moments in practice and especially the game. Showed some very nice sparks of talent. Someone to keep an eye on as his career progresses.
Read full article