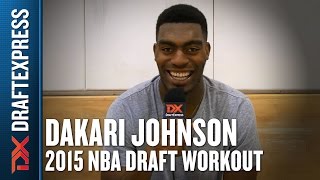 Heavily recruited out of high school, ranked as the #9 player in 2013 by RSCI, Dakari Johnson mostly came off the bench in his two seasons at Kentucky, playing behind the likes of Julius Randle, Willie Cauley-Stein and Karl-Anthony Towns. In limited minutes, Johnson provided solid production from the backup position as he averaged 15.7 points, 11.4 rebounds and 2.3 blocks per 40 minutes pace adjusted, in 16.3 minutes per game, and similar numbers as a freshman (14 minutes per game). Joining six of his Kentucky teammates in declaring for the NBA Draft, Johnson will hope to hear his name called in the late first round or early second on draft night, as he takes the next step in his basketball career, even if his showing on the workout circuit apparently hasn't helped his cause.See Also:
-Dakari Johnson Workout Video and Interview from Los Angeles
-Dakari Johnson Interview from Chicago
-Dakari Johnson DX Scouting VideoAt the NBA Combine, Johnson measured a hair under 7-feet in shoes, with a solid 7'2 wingspan and gigantic 9'4 standing reach, which gives him excellent physical attributes for a NBA center. He's always had a huge frame, tipping the scales at 263 pounds already as a 15-year old at the LeBron James Academy, and has done a nice job of toning his body and getting in better shape as he's gotten older, something that will likely be an ongoing process. Dakari isn't especially impressive athletically, as he possesses below average explosiveness and quickness. While he is a high energy player, he will need to prove he can compete athletically on a nightly basis at the NBA level, which is one of the bigger question marks he'll face as an old-school, below the rim center.

Not a focal point of the Kentucky offense, Johnson didn't show much in the way of refined offensive skills during his time in college. The majority of his offense came in post-up situations, and while he improved during his two years, his ability to score against NBA defenders remains uncertain. He has nice post moves for a player of his age, relying most on his drop step and hook shot which he can use on either block and he is patient enough to read the defense before making his move. With his limited explosiveness preventing him from elevating over his defender, he will need quality footwork to be able to score with his back to the basket.

However, he isn't consistent enough in executing his moves, which leads to him either fumbling the ball away or not creating enough separation from his defender, resulting in tough shots. He doesn't show great vision out of the post, regularly missing teammates cutting or spotting up around the perimeter. He also will need to improve his touch and finishing around the rim, as he hit just 41.3% from the field on his post-up possessions according to Synergy Sports Technology. While he won't be fed the ball regularly in the post in the NBA, being able to give his team some quality possessions here and there will help him earn minutes.

Johnson is a tenacious offensive rebounder, and although he lacks athleticism, he makes up for it by working hard to track down every loose ball. His 4.3 offensive rebounds per 40 minutes pace adjusted is impressive, especially considering the fact that he was usually paired with another strong offensive rebounder beside him. As a freshman, he averaged an even better 5.8 per-40. Since teams won't be running many plays for him, he will need to find other ways to contribute and offensive rebounding will be a key role for him to fill.

When he does get the ball around the rim in non-post up situations, he is a capable finisher despite his inability to explode above the rim, as he finished at a clip of 63.1% according to Synergy Sports Technology, much better than what he did with his back to the basket. He is also adept at drawing contact and getting to the free throw line as his 9.1 free throw attempts per 40 minutes pace adjusted ranks first among all players in our top 100. He has good hands and soft touch, which makes him a reliable finisher combined with his strong frame, all things that can help him carve out a role at the NBA level.

Johnson improved his defensive production from a box score perspective in his sophomore season but doesn't project to be a huge impact player on that side of the ball due to his average athleticism. He blocked a solid 2.3 shots per 40 minutes adjusted thanks to his solid wingspan and nice timing, but there are question marks about what type of rim-protector he can become with his lack of quickness and explosiveness. He's also not a great defensive rebounder, tracking down 7.1 defensive rebounds per 40 minutes pace adjusted, an average mark compared to other centers in our top 100.

Johnson plays hard defensively but he doesn't possess great lateral quickness which will limit his ability to guard players outside the paint. He's strong enough to guard players on the post and could provide some value in the right situations with his big frame, long arms and solid IQ.

With his size, strength and finishing ability at the rim, Johnson has the potential to fill a role with NBA teams. In limited minutes off the bench, Johnson will have to play hard and with high energy, something he's done somewhat inconsistently at times, which would endear him to his NBA coach. If he can overcome his relative lack of athleticism, he can be a useful NBA player with his physical tools and reasonable skill set.
Read full article

DraftExpress
@DraftExpress
Dakari Johnson's measurements are very similar to the ones he posted almost three and half years ago at the LeBron James Skills Academy. Standing 6'11.25 in shoes with a 7'0.25 wingspan and a 255-pound frame, Johnson has great size for a center and his 34 inch maximum vertical leap ties him with players like Emeka Okafor, and Nene among NBA centers tipping the scales about 250 when they were entering the league, even if it was the lowest mark among Kentucky prospects at this event.
Read full article

-Outstanding size for a center. Measured 6-11 in shoes, with a 7-0 wingspan and a 263 pound frame
-Strong frame allows him to carve out deep post position inside at will
-Major presence on offensive glass
-Possesses solid hands
-Has a basic back to the basket game after sealing off his man
-Capable of scoring with a right-handed jump-hook shot or simple duck-ins

Weaknesses:
-Not incredibly explosive
-Struggles to finish around the basket in more complicated situations due to lack of elevation
-Not incredibly skilled at this stage in terms of post moves, footwork or counters
-Needs to improve left hand
-Average free throw shooter
-Average defender. Struggles to step out outside the paint. Does not possess great lateral quickness. Lacks the explosiveness to protect the paint as a help-side defender

Outlook: Chiseled center who looks the part currently more than anything. Will have some adjustments to make defensively in college. Will need to continue to improve his skill-level and feel for the game, but at just 17 years old has plenty of time to do so.
Read full article