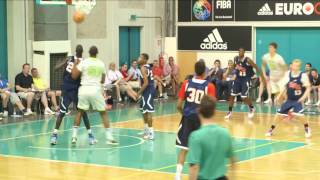 Felicio, the second year NBA pro out of Brazil put together a solid showing in Las Vegas, although his numbers were somewhat limited having only played 22 minutes per game. He split time last season between Chicago and the Canton Charge, and managed to carve out a small role off the bench among a crowded frontcourt late in the season for the Bulls, flashing some real intrigue towards the end of the year.

Listed at 6'9 and 284 pounds, Felicio is undersized for a center, but uses his strength and wide frame to compensate for his lack of height and average length. Felicio is extremely efficient on the offensive end, playing within himself, and finding most of his touches on offensive rebounds, dump offs, and hard rolls to the rim. He has solid hands, and is more mobile and nimble than you would expect for someone his size. He flashed the occasional back to the basket move in the post, but his individual offensive game is still very much a work in progress. Along with his impressive efficiency on the offensive end of the floor, Felicio demonstrated excellent vision passing from the elbows and out of the post. He refrained from taking many jump shots in Vegas, but he went 4-10 from deep with Canton last year (and shot 88% from the free throw line line in summer league) so that is certainly an aspect of his development to monitor considering his obviously soft touch.

On the defensive end of the floor, he has some potential as a shot blocking threat, but he can struggle in on ball situations due to a lack of lateral quickness. He has shown that he a reliable piece on offense, that doesn't need the ball in his hands to have an impact on the game. He's likely shown enough in Chicago and over the course of the summer to feel good heading into the second year of a non-guaranteed deal, and could very well emerge as a real find of the scouting department (led by GM Gar Forman) considering he was signed as an undrafted free agent.
Read full article

Jonathan Givony
@DraftExpress
One of the most productive players over the course of the EuroCamp game action on a per-minute basis, Cristiano Felicio had a strong showing here. Standing 6'9 with a 7-foot wingspan, Felicio is a bruising power forward with good athleticism. Committed to Oregon while attending prep school in the United States a little over a year ago, he returned to his native Brazil to start his professional career after being ruled ineligible over concerns that he had signed a professional contract in his late teens.

During his three days here, Felicio rebounded the ball effectively and used his strength and athleticism to finish inside. On top of that, he flashed a promising shooting stroke, a significant development given concerns that he's a bit stuck between the four and five spots. He needs to continue developing his midrange game and overall skill level, but his marked improvement is a big step in the right direction. His impressive play here, combined with his solid physical tools, certainly put him in conversations to be selected in the back half of the second round.
Read full article

Matt Williams
@DraftExpress
Despite the lack of obvious NBA talent, there's plenty of intrigue here with one-time Oregon commit Cristiano Felicio ranking among the players with the most to gain here. Playing last season in Brazil for Flamengo, Felicio was not scouting as heavily during the year as many of his European counterparts, making this a great chance for him to make a strong impression and for scouts to get a feel for his game. He's got terrific physical tools, and could very well help himself in this setting.
Read full article

Brazilian big man Cristiano Felicio was one of the most interesting prospects to emerge at this tournament. He led the tournament in field goal percentage, at 76%, and was one of the best offensive rebounders on a per-minute basis. He has come a long way since we saw him last summer at the U-18 FIBA Americas Championships in San Antonio.

Physically, Felicio draws comparisons to fellow Brazilian big man Nene. At around 6-9, with an outstanding frame, long arms and very nice athleticism, he stands out immediately with his rare physical attributes. He is a pretty raw player overall, but he showed flashes of potential in a variety of areas, including in the post and in transition. He even knocked down a 17-foot jumper at one point.

Felicio clearly lacks experience at this stage, but he has a decent feel for the game and appears to be a pretty competitive player, which is always a good sign. He still has a long way to go to reach his full potential, but he definitely established himself as a player teams will want to keep track of over the next few years.
Read full article