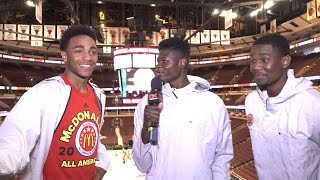 The Top Ten Performers at the 2016 adidas Nations

From a physical standpoint, the Las Vegas native and Bishop Gorman standout has the tools of an NBA wing standing 6'5 ½ in shoes with a 6' 11 wingspan and a very projectable frame (strong base, good upper body with room to fill out) that already tips the scales at 196 pounds. Athletically, O'Bannon is fluid and light on his feet allowing him to get out and score in transition, where he's regularly looking to fill the lanes. In terms of explosiveness, O'Bannon is an average leaper around the rim and doesn't quite have elite burst with the ball.

In the half court O'Bannon likes to play out of isolation situations. While he's showed some feel depending on his role at various events we've scouted, he plays with a score-first mentality and can get sticky fingers' at times, failing to keep the ball moving and play within the offense. But when O'Bannon does go one on one, he's usually fairly effective at the high school level. He makes an effort to play at different speeds, can use a sweeping crossover to set up his jump shot and is able to get to his jumper in mid-range spots due to his cocked back release. He's not an overly pure shooter, but O'Bannon has nice touch from the perimeter, particularly off the bounce as he likes to use rhythm hang dribbles to get his defender on his heels before pulling up.

O'Bannon can also use his tools to straight line slash as the primary ball handler, or attack a closeout when playing off the ball. As a catch and shoot player he's a bit of a mixed bag. As you can see below both of O'Bannon's elbows fly out and he employs a slow, full body dip before getting into his motion. To be more effective off the ball he can improve his shot preparation to help speed up his release. O'Bannon does get excellent arc and rotation and figures to be a reliable shooter in time.

While O'Bannon can score in transition, make shots off the catch or dribble, straight line slash, get to the line, and even finish with floaters or left-handed reverses at times, he's not the most polished shot creator against elite defenders. Although capable, he's a fairly average ball handler in terms of advanced combo moves and isn't overly shifty or explosive with the ball. A lot of O'Bannon's offense comes via contested pull ups - he shot 47% from two in 14 Nike EYBL games - and he'll have to find more ways to score efficiently, and also create for others, to maximize his offensive potential.

On the defensive end, O'Bannon can be a bit too lackadaisical, although he has the tools to be a solid, one-position defender on the wing. His twitch and quickness is good not great and he tends to be too upright while on the ball. Off the ball he can make plays in the passing lanes thanks to his tools, but has a tendency to relax or gamble for steals a bit too often. Overall O'Bannon will certainly be able to score at a high level in college and if he's able to become a more consistent spot shooter, improve his decision making and up his intensity on defense, he'll give himself a chance at the NBA level given his already solid tools and excellent scoring instincts.
Read full article