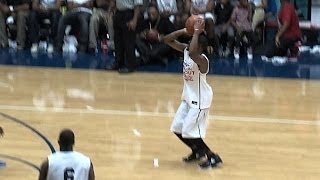 Matt Williams
@DraftExpress
This may not be Watsons best performance of the Summer League, but it accentuated his talents. He did a great job moving the ball up the floor on the break and making things happen. He has nice quickness and great speed, allowing him to beat his man to the where he earned numerous trips to the foul line. Watson shows a tremendous motor, always in attack mode. His assist numbers werent great, but he set the tempo and sparked quite a few easy baskets. His shooting touch looked solid, and considering the amount of time he spent with the ball in his hands, he didnt turn the ball over all that much. Defensively, Watson was an absolute nuisance. He has incredibly quick hands and took advantage of some shoddy ball handling by Dallass starters. Watson stood out more than he did last year, and seems like hes capable of sticking in the League if that is telling of his development over the past year.
Read full article

Mike Schmidt
@DraftExpress
A year removed from college, C.J. Watson is coming off a difficult rookie season in Europe, where he bounced around between Italy and Greece and never really found his rhythm, which isnt a huge surprise considering that hes a bit of an acquired taste. He did have a terrific summer league showing with San Antonio, particularly in the Rocky Mountain Revue. Watson is a 6-2 combo guard, leaning more towards the point guard position. Hes just an average athlete, but is exceptionally smart and crafty, possessing a beautiful perimeter stroke and a high basketball IQ. He gets in the passing lanes well, and is getting better and better at creating his own shot and setting up teammates. Expect him to be one of the first players off the board tonight, as hes a perfect example of what the D-League is all about, and might even warrant a call-up at some point this season.
Read full article

Eric Weiss
@DraftExpress
Watson was a very steady influence for his team during the tournament. His team lacked substantial pro talent, yet Watson was able to act as the rudder, steering his team into the championship game with his smart decision making and lethal perimeter shooting. While Watson's shot is NBA-ready, his pure point guard skills were not evident in this performance. Watson needs to show a better ability to use change of speed to penetrate the lane and set up teammates. If Watson wants to take his game to the highest level, he must be able to do more than simply facilitate ball movement; he must create for others as well. In a motion offense Watson has the decision making skills and overall BBIQ to help a team right now. Defensively, Watson is fundamental in his body positioning and doesn't gamble for steals, nor give his opponent more space than necessary to defend him effectively.
Read full article

Eric Weiss
@DraftExpress
The first thing that stands out about Watson after two games is how controlled he is with what he does. Everything he wants to do seems to be under his control, although he isnt capable of doing everything he may need to do in order to prove himself as a true NBA PG.

But, Watson is a plus NBA shooter from long range, that much is for sure. His release, follow through, and body position is the stuff that instructional videos are made about. He may have the 2nd best form next to Steve Novak of all the players in this tournament.

Defensively, Watson shows poise and awareness while on the ball. As a help defender, Watson is effective at hedging into the lane enough to make the ball handler hesitate for fear of Watson getting a deflection. He is not a ball-hawk by any means, but solid is the word to describe both his fundamental approach and overall effect.

In order to show better pro potential, though, Watson will need to show much better penetration and change of speed ability as well as the vision to capitalize on it. Thus far, Watson has simply been content to make the sound play and hit the shots that present themselves from the perimeter. Theres a lot of talk from European teams about Watson, and this could be a very good route for him to improve his overall skill set to the point of NBA effectiveness.

But it should be noted that Watson got perhaps the least talented team in this invitational into the final game, much as he and Chris Lofton single handedly got Tennessee a 2nd seed in the tournament just weeks before with nothing but a great coach (and Dane Bradshaw) at the helm besides them. If Watsons presence can somehow inspire great play such as this, his future may be brighter than anticipated as long as he puts in the work to improve the lesser areas of his game.
Read full article

Landry Fields
@DraftExpress
One of the most steady and more under-appreciated floor generals in this tournament, CJ Watson is exactly the type of player most coaches would love to have running their team. Nothing he does really jumps out at you, but at the end of the day he just gets the job done, to the tune of 15 points a game with a near 2/1 assist to turnover ratio and superb percentages from the field (47% FG, 43% 3P, 87% FT). He's smart, opportunistic, unselfish, and plays both ends of the floor. Watson doesn't really stand out as a great draft prospect from what we've seen (he's a clear cut 1 1/2, with good, but not great athleticism) but he will surely get his chances to show what he can do at either or both of the NBA pre-draft camps, as well as private workouts.
Read full article