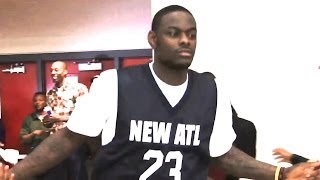 Matt Williams
@DraftExpress
Sporting an improved frame and a brand new Mohawk, Anthony Morrow came into this year's NBA Summer League looking like a completely different player than a year ago. That's what 23 minutes per game in your rookie season will do for an undrafted free agent, and Morrow seemed to have no problem asserting himself on this setting right off the bat, to the tune of 25 points per game on 61% shooting from the field.

Morrow's game hasn't changed that much, but his confidence appears to be sky-high at the moment. Fresh off leading the entire NBA in 3-point shooting percentage at 47%, he didn't need to be told twice to fire up shots when given the opportunity to do so. Morrow made jumpers in every way possible: coming off screens, firing in transition, spotting up off a double team, or pulling up off one or two dribbles. The result was the same every time, as his pure, effortless stroke never alters regardless of the amount of attention the defense gives himallowing him to make 50% of his 3's here, despite hoisting up a number of very questionable attempts.

Besides his incredible shooting ability, there isn't a great deal to speak of about Morrow's game. His ball-handling skills are poor, meaning he rarely if ever gets to the free throw line. He generated just a single assist in his three games here in Vegas, although he's traditionally not a turnover prone player at all to counter that when he's playing in a real basketball setting. He's actually an extremely intelligent player who understands his limitations quite well and knows how to maximize himself on the court. Defensively, he doesn't offer a great deal, as he's often willing to put the effort in, but just doesn't really have the physical tools to be much of a presence here.

Morrow is not just a 3-point shooter, though, only 34% of his field goal attempts last season came from behind the arc in fact. He does an excellent job of using shot-fakes to get his man in the air and then calmly pull-up for an open jumper from 18-20 feet. He shoots almost just as many mid-range jumpers as 3-pointers, and makes over 50% of those too. His ability to make shots at such an outrageous rate should allow him to stick around the NBA for quite some time, especially if he continues to improve on his defense and ball-handling skills.
Read full article

Jonathan Givony
@DraftExpress
Anthony Morrow gets the nod for our undrafted sleeper of the day award, as he was able to drop 19 points in just 23 minutes of action, on a scintillating 5 of 7 from beyond the arc. Morrow was one of the best shooters in college basketball this season, hitting 45% of his shots beyond the arc playing in the ACC, so its not like this is exactly startling news. It is interesting to see how quickly he has been able to expand his range to the NBA line, and just how intelligently he moved off the ball finding open spaces for which to get his shot off. He kept things nice and simple all day long, sticking to what he does best, while also mixing in a little one dribble pull-up jumper from mid-range for good measure. He creates separation nicely and has a gorgeous text-book release. Some of the scouts around us mentioned that they think hes too one-dimensional to play in the NBA (as hes not a great ball-handler, athlete or defender), but to his credit, he was competing hard and not looking bad out there. Morrow surprisingly already signed a contract to play all the way out in the Ukraine, leading many disappointed high-level European teams here wondering what exactly his rush was to sign in a league like that.
Read full article