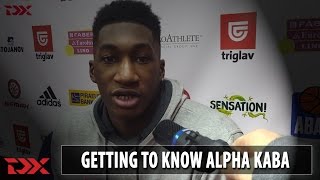 Matt Williams
@DraftExpress
A long, chiseled big man still in the early stages of his development, Alpha Kaba elected to keep his name in the 2017 NBA Draft by virtue of entering for the third straight year, after a solid season with Mega Bemax.  Averaging 10.3 points, 8.3 rebounds, and 1.3 steals per game, Kaba didn't take quite the step forward some had hoped, but still has some upside to grow into and remains a potential draft and stash option in the late second round.

Kaba emerged as a prospect at the 2014 U18 European Championship, where he averaged 13 points and 8.2 rebounds per game, flashing a promising offensive package and making an impact with his impressive physical tools. Playing the following season primarily at the junior level with Pau Orthez, the Blois native jumped to Serbia to play for the NBA Draft prospect factory run by his agency BeoBasket last season.  Declaring and withdrawing from the Draft each of the last two years, Kaba made some incremental strides this season as a regular starter before going all-in on the 2017 NBA Draft.

Standing 6'10 with a massive 7'5.25 wingspan and a solid 230-pound frame that continues to improve, it isn't hard to see what makes Kaba so intriguing at the next level on first glance.  He has tremendous length, comparing favorably to notoriously long NBA players like John Henson in terms of sheer size.  Kaba is also a mobile, although not particularly explosive, athlete.

Playing a significant role for a Mega Leks team that competed in the FIBA Champions League, Adriatic League, and Serbian First Division, Kaba saw extensive playing time in the wake of the club losing both of its starting big men from last season.  Finishing the season leading the team in rebounding and ranking as the club's top frontcourt scorer, Kaba vividly showed his strengths on weaknesses on both ends in his second season in Serbia.

Offensively, Kaba remains a mixed bag.  On one hand, his mobility and size make him a fine target around the rim and he is capable of making an occasional 3-pointer, attempting 1.6 per game this season.  On the other hand, his lack of great explosiveness and touch limit his ability to score in traffic, despite his length, and his shooting mechanics leave a lot to be desired, as he shot just 29% from beyond the arc across 51 games. His free throw percentage did improve from 56% to 64%, so there remains some hope that he can continue to make strides with this part of his game.

Over half of Kaba's offense came in catch and finish situations off of rolls to the rim, put backs, or cuts.  Shooting 57% around the rim in the half court, Kaba's length allows him to play above the rim on the move and grab rebounds at a strong rate, but he forces some shots inside, lacks a degree of footwork and touch, and isn't the most natural scorer around the basket.  Without much to speak of in terms of post moves, outside of the occasional hook shot, Kaba rims out some shots inside that he's certainly capable of making.  Just 21 years old, and one two seasons into his professional career, there is still some room for optimism that he'll find more of a comfort level scoring the ball inside, but he didn't make the type of progression this season that you might hope for considering the level of competition of big men in the Adriatic League.

Away from the basket, Kaba shoots a slow ball out in front of his body, which looks far more accurate some nights than others.  With the obvious side-spin on some of his attempts, the French big man has some things to clean up mechanically, but has some potential as a floor-spacer long-term.  He also flashed some ability to attack closeouts off the dribble at the junior level, but his decision-making with the ball in his hands inside the arc has been less than stellar at the professional level.  Without a particularly high skill level, strong feel for the game or great scoring instincts, Kaba is still in the early stages of his development on this end of the floor, as evidenced by his paltry 4.9% to 18.3% assist to turnover percentage ratio and -6.7 PPR, which ranks among the lowest in this draft.

Defensively, Kaba makes some plays by virtue of his length alone and has shown significant improvement as a rebounder.  The 1996-born big man doesn't have great timing or awareness, and still struggles with foul trouble, but plays with enough energy to leave some room for hope. He averaged an excellent 2.2 steals per-40, one of the best rates among big men in this draft, but was just a decent rim-protector at 1.5 blocks per-40, up from 1.1 the previous season. Struggling to defend away from the rim because of the tardiness of his rotations and the angles he takes, Kaba has plenty of untapped potential on this end of the floor, even if he doesn't show the type of athleticism you might hope for to be a game-changer.

Young big men with Kaba's combination of size and length don't grow on trees, and even if he remains rough around the edges, he had a productive season against solid competition, has become a more aggressive rebounder, and has some building blocks to work with.  His lack of progress as a scorer, shot-blocker and in terms of his feel for the game the last few years is a concern, but he will still be a viable option for teams looking to draft and stash a developmental prospect in the second round, especially considering how weak this class of internationals is.
Read full article

Getting to Know: Alpha Kaba

DraftExpress
@DraftExpress
French entry entrant Alpha Kaba had his ups and downs this week. On the plus side, he bothered shooters with his 7'5.25 wingspan, flashed the ability to make midrange jump shots, and finished above the rim at times. On the down side, his intensity wavered at times, he seemed to struggle with some of the concepts being taught, his shooting and finishing weren't consistent, and he fumbled a few passes. Kaba is obviously a project, but his size and length are clearly NBA caliber and he's only 19 years old, making him one of the youngest players to put his name in the draft. His play at the junior level and flashes at the senior level could ultimately earn him a slot in the second round as soon as this year. Or he could withdraw and elect to try again in 2016, after changing scenery and finding a better development situation than the one he currently experienced in France.
Read full article

DraftExpress
@DraftExpress
Standing 6'10 in shoes (6'8.5 without) with a 7'5.25 wingspan, Alpha Kaba's +8.75 wingspan differential is on par with players like Kawhi Leonard (+9) and Andre Drummond (+8.5). Tipping the scales at 226 pounds and registering a 30 inch maximum vertical leap, should Kaba get drafted, it will be interesting to see what his body and explosiveness look like after a few years in a NBA strength and conditioning program, as he seems to be in very very early place in his development process.
Read full article