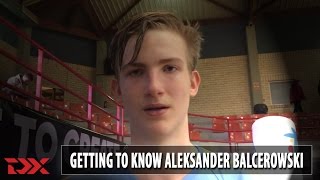 Strengths
-Legit 7-footer with a frame that should fill out nicely in time. Wide shoulders. Above average length.
-Not a quick twitch athlete, but can get up and down the floor. Fairly mobile for his size.
-Stretch big potential. Simple stroke with nice touch out to three. Made only 1-of-6 threes, but shoots a really easy ball. Showed out well in the 3-point shootout.
-Can playmake from the perimeter. Good passer on short rolls. Comfortable driving and kicking in space. Knows how to play when run off of his spots. Solid feel from the post. Should turn into a plus-distributor as he gains more experience.
-Soft touch on jump hooks. Not overly advanced, but will mix in an occasional quick spin. Willing to use his left around the rim. Has push shots on short rolls.
-Provides some rim protection by virtue of size and length. Capable when he doesn't have to cover a ton of ground or react quickly.
-Has the size to hold his own as a post defender, although he's still improving down there.
-Shows flashes of competitiveness on the glass, although very inconsistent

Weaknesses
-Lacks a degree of quickness. Slow twitch. More mobile than explosive. Has to get momentum behind him to get off the ground. Plays mostly below the rim.
-Shooting potential not fully realized yet in game situations
-Injury concerns  broke the fifth metatarsal in his foot and has had knee issues as a result.
-Footwork is a bit rigid in the post. Struggles versus like-sized defenders. Could use a go-to move.
-Has a feel but gets too cute as a distributor at times. Very turnover prone  4.7 per 40 at ANGT
-Not the toughest big on the block. Can be a bit timid as an interior defender. Struggles to finish through contact at times. Goes up soft.
-Doesn't give you much as a perimeter defender. Weak, one-slide hedges. A bit heavy footed when on an island. Struggles away from the rim.
-Not the rim protector he could be. Split-second late rotating. Not all that quick off the floor. 1.9 blocks per 40 minutes given his tools.
-Slow to defensive rebounds. Can't grab boards outside of his area. Instincts and anticipation aren't great. Not very physical. Very poor 5.6 rebounds per 40 minutes at the ANGT, as a 7-footer with solid length.
-Will have to turn some of his strengths into elite skills  shooting, passing, scoring on the interior  as he's likely not going to get significantly quicker or more athletic as his career goes on.

Outlook
Playing in his first competitive action since May, Balcerowski showed enough potential as a mobile stretch big with a nice feel to be considered one of the more interesting long-term prospects in L'Hospitalet. The son of Marcin Balcerowski, a former Polish League standout turned wheelchair basketball star and coach after a tragic car accident, Aleksanders future success will be contingent upon his health as well as the development of his stretch big skills. Balcerowski clearly needs to get tougher and play with more of a mean streak, but he's likely never going to be a major plus in that category, so to really stick his offensive game will have to develop to the point where it outweighs some of his shortcomings defensively and on the glass. All in all, the 16-year-old Gran Canaria big man should be considered an NBA prospect as 7-footers with touch and mobility don't grow on trees.