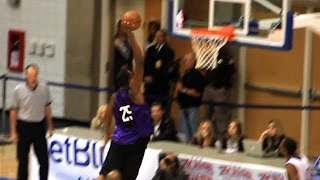 Matt Williams
@DraftExpress
Overview: A developing franchise player who has become a force on the block. Has great size and strength for a power forward, but spends quite a few minutes at the center position due to defensive reasons. More explosive than fluid as an athlete. Tough to contain considering his blend of power and finesse. Has a tremendous wingspan. Seems to have lost weight since entering the League, but still has more room to improve his conditioning. An incredibly naturally skilled back to the basket player. Possesses awesome touch and footwork in the post. Face-up game and passing skills could still use work. Not quite an ideal go-to-guy yet, but is getting close. Still very much a mediocre defender, particularly at the power forward position. Rebounds at a high rate on both ends, thanks to his terrific hands and anticipation skills. Declared for the draft out of Prentiss HS (MS). Was unbelievably dominant as a prep. Took two seasons to get comfortable in the NBA. Has benefitted from a lot of touches and has seen his growth as a player accelerated significantly over the last two seasons. Still very young, but is extremely productive as a scorer and rebounder already. Will inevitably improve, but not by the leaps and bounds he did over the past three years. Clearly a franchise cornerstone, but needs to show that he can do more than just put up big numbers on bad teams. Has all the talent in the world, but will have to develop the passion and winning mentality that high school players at times lack after skipping over college. Must improve on the nuances of the game if hes to reach his full potential and become an all-star big man.

Offense: An incredibly talented young big man, with a phenomenal feel for scoring in the post. Gets almost half of his offense off of post ups with another large portion originating from his effort off the ball. Has outstanding hands, footwork and touch inside. Gets almost three quarters of his touches on the left block. Very good right handed baby hook that he can utilize in the most difficult of angles, which he mixes in with a steady dose of drop-steps, step-throughs, shot-fakes and turn-around jumpers. Surprisingly explosive first step. Tough to stop him from getting where he wants to go. Has some nice counter moves. Shows off a great spin move off the dribble from time to time. Needs to finish more consistently with his left hand. Very good ball handler with his back to the basket. Doesnt turn the ball over a high rate, which is something of a surprising considering the number of touches he gets and his experience level. Very strong with his moves and with the ball. Goes to the line at a good rate due to his willingness to throw his weight around. Can finish with contact, and will get above the rim in traffic. Has come a long way as a free throw shooter. Still developing his jumper. Lacks consistency and fluidity in his release, but its becoming a tool for him. Will benefit from defenses respecting his range. Not much of a catch and shoot guy right now, but can run the pick-and-pop to some extent. Shot-selection looks very poor at times. Tends to get flustered by defenders as a jump shooterrushes his shots. Decision making and ability to read defenses arent where they need to be just yet. Spins into double teams and is a fairly poor passer considering the amount of touches he gets. Tremendous hands allow him to come down with a lot of offensive rebounds. Continues to get better in almost every facet of the game. May need some time to adjust when opponents begin to respect his team more and focus more heavily on trying to stop him. Already a feature offensive player and a highly productive threat, but has room to grow.

Defense: Has the length and strength to be effective on this end, but lacks the fundamentals and effort level to capitalize. Used to be extremely foul prone, but has learned to sacrifice points on the defensive end for the sole purpose of staying on the floor longer. Does a poor job defending the post, allowing defenders to back him down too often and outright giving up on plays. Will still fall for some fakes, but not as many as he used to. Fights for position, but not to the point that he could get called for a foul. Shows great timing and anticipation when contesting shots, but isnt quite quick enough to be a major factor coming over from the weakside. Gets quite a few of his blocks on the ball. Very instinctive in that regard. A liability when attempting to defend power forwards, which forces his team to play him as an undersized center. Needs to lose weight and improve his conditioning level to help in this regard. Struggles to hedge screens on the perimeter--doesnt recover to his man very quickly. Is limited by the same characteristic when closing out shooters. Takes up too much space down low not to be a solid rebounder. Tremendous wingspan, hands and reflexes make him extremely productive on the glass. Has some tools defensively, but is still working to put them together on a more consistent basis.
Read full article