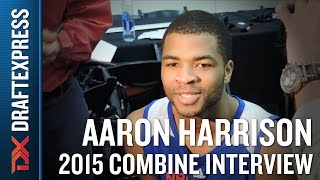 adidas Nations: The Best of the Rest

The slightly lesser acclaimed of the highly touted twins, Aaron Harrison (#7 Scout, #7 Rivals, #7 ESPN) is more of a wing player than his brother, but is an intriguing prospect in his own right.

Standing around 6-5, with an incredibly well-developed frame for a 16-year old, Harrison impresses more with his maturity and skill-level than with overwhelming explosiveness.

Capable of catching fire and unleashing a barrage of 3-pointers, Harrison has an excellent shooting stroke both with his feet set and off the dribble. Also capable of making plays off the dribble, Harrison uses crafty change of speeds, often overpowering opponents with sheer strength. Still an improvable ball-handler, Harrison will need to continue to add polish to his repertoire and learn the nuances of scoring and defending in the half-court to maintain his status as one of the best wing players in his class long-term.
Read full article