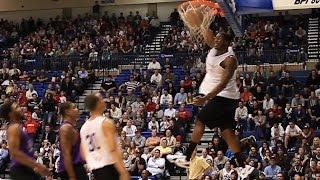 Joseph Treutlein
@DraftExpress
Wesley Matthews showed off his total package of skills today, doing a great job of playing within his teams offense while still finding a plethora of opportunities to score for his team. Matthews constant motion off the ball and ability to recognize how to attack seams in the defense is very impressive, and he takes full advantage of it with strong drives to the lane and finishes at the basket. Matthews is looking a bit more athletic with the ball than we expected, having at least adequate athleticism for the NBA with his playing style, going strong to the whole while angling his body well to protect the ball.

Matthews ball-handling has been a mixed bag, at time showing impressive crossover drives while attacking the basket in either direction, but at others hes struggled to maintain his handle, specifically in traffic where he is prone to lose control.

Matthews did a good job in other areas as well, showing very good court vision and decision-making ability while dishing out quite a few smart passes. His outside shot wasnt falling today, though he didnt force the issue with it, instead taking advantage of his slashing game as aforementioned. On the defensive end, Matthews played his usual tough defense, stifling the likes of Ryan Toolson.
Read full article

Joey Whelan
@DraftExpress
The last time we checked in on Wesley Matthews two and a half months ago, he had assumed a much more prominent role on a Marquette team preparing for its daunting Big East schedule. Despite the significant jump in competition from the programs non-conference schedule, Matthews has continued to produce at a high rate, helping his team attain a top-10 national ranking and showing some marked improvements in his game in the process. While he still has a lot to prove, Matthews has solidified his stock as a draftable prospect and seems capable of climbing even further if he continues to improve throughout the draft process.

The most significant change in Matthews game since mid-December has been the consistency of his outside shot. At that point in the season, he was shooting only 30% from three-point range, a far-cry from the almost 42% that hes shot in conference play. Matthews still doesnt elevate well when he shoots and is prone to fading-away at times, but he displays consistent mechanics on his release and seems to have improved his perimeter footwork. Those factors, coupled with the fact that hes been more selective with his attempts from the perimeter, have helped him improve not only his efficiency from beyond the arc, but the efficiency of all of his outside shots in general. He isnt going to wow anyone with his perimeter shooting yet, but the fact that hes making shots should give NBA teams reason for optimism considering the other things he brings to the table.

Marquettes undersized lineup creates ample open looks for Matthews, which allows him to be more particular than the average player when looking to score. He doesnt have to force many attempts from the perimeter, preferring to take more risks attacking the basket. Though he isnt an especially explosive athlete, and is just an average ball-handler, he gets a lot of looks at the basket by getting up the floor in transition, moving into the open spot under the rim when his teammates penetrate, and driving to the hole when he receives the ball with his defender off-balance. The strength he shows when he gets his shoulder into a defender, his ability to take contact and get to the line, and his consistency as a foul shooter place him amongst the most efficient scoring wings in the country in terms of true shooting percentage. In everything that has to do with getting to the free throw line, Matthews is amongst the best in college basketball.

Outside of his ability to score from outside, Matthews is capable of making his presence felt in a number of other ways on the offensive end. He moves the ball well on the perimeter, displays improved decision-making, and has always been a solid offensive rebounder for a player his size. On top of the guard-skills he brings to the table, Matthews has also shown the ability to take advantage of mis-matches in the post this season. His strength makes him a tough guard for weaker players, and hes pinned his man for an easy look on a handful of occasions this season.

On the defensive end, Matthews is a very solid player at the college level. Hes smart, shows good instincts, and demonstrates the work ethic that will get him noticed in pre-draft workouts. The fact that he often has to box out bigger players wont hurt him either. Unfortunately, Matthews doesnt appear to have the elite lateral quickness that would allow him to seamlessly translate his defensive ability to the next level, despite having most of the other tools necessary to do so.

Though Matthews has the strength and athleticism to do a lot of damage at the rim at the college level hes connecting on 59% of his attempts according to Synergy Sports Technologys Quantified Player Report, his average vertical explosiveness could make NBA decision-makers question his ability to do so at the next level. Matthews isnt a bad athlete by any stretch of the imagination, but he doesnt play above the rim as consistently as most NBA wings, nor does he have the dynamite first step that will let him get to the rim at the next level with the same frequency that he has at Marquette. What he does have is great functional strength, a good basketball IQ, and a willingness to do the little things.

The fact that Matthews does not stand out as a dynamic threat in any one area and is only a slightly above average run-jump athlete by NBA standards will relegate him to role-player status in the minds of GMs, making his willingness to do the little things that much more important. Matthews could do wonders for his stock by shooting the ball well throughout the NCAA tournament, but will likely need to have good showings at the Portsmouth Invitational and the NBA Combine (should he be invited) to ensure hearing his name called on draft day. As it stands, Matthews has improved his stock this season, but hell need to show that he can produce at a good rate in a different setting when the time comes.
Read full article

Joseph Treutlein
@DraftExpress
Wesley Matthews has played a solid supporting role for Marquette in his first three seasons, however he seems to be trying to break out to become more of a focal point player, leading the team in scoring with 19.6 points per game in the early going this season. The hard-nosed 65 swingman has certainly made his presence felt thus far this season, however its very important to consider the level of competition Marquette has faced, which, besides Wisconsin (where Matthews had his worst game), is nothing compared to what theyll see in the Big East, starting in a few weeks.

Playing alongside shot creators Jerel McNeal and Dominic James, Matthews does most of his damage playing off his teammates, making quick cuts to the basket, leaking out in transition, attacking the boards, and also hitting the rare spot-up three or taking his man off the dribble himself. His best attribute on the offensive end is his ability to get to the rim and draw contact, evidenced by the fact that he has 79 free throw attempts this season on just 104 field goal attempts, a remarkable ratio ranking him top-10 in that category in our entire college database. While this number is obviously elevated from a small sample size and weaker competition, his ratio from last season would have also put him in the top 30.

Attacking the rim, Matthews shows good body control and the ability to adjust with the ball, getting around defenders or just going straight into them to get to the line, taking full advantage of his pro body and excellent length. However, he doesnt have amazing vertical explosiveness, which stops him from being a great finisher, as he often has trouble getting good separation in the lane, leading to some tough shot attempts.

Matthews shows flashes of dribble-drive abilities as well, showing a good first step, excellent strength, and pretty good change of direction ability when he pulls out the rare crossover or spin move. Unfortunately he possesses just average ball-handling skills in close quarters, which hampers him from fully taking advantage of his ability in this area. He does most of his damage around the rim by cutting off the ball or catching with his man rotating over, giving him a half-step start, and not taking more than one or two dribbles to get to the basket.

Matthews makes his presence felt doing a lot of the little things as well, moving off the ball, making smart passes, leaking out in transition, and pursuing hard against players much larger than himself on the offensive glass. He plays with a reckless abandon that has become a trademark of Marquette basketball as of latefor better or worseand his toughness is sure to draw fans amongst professional talent evaluators.

One area Matthews could definitely stand to improve offensively is his jump shot, specifically from three point range. Between this season and the previous two, Matthews has taken 2-3 three-point attempts per game, but his percentage has never risen above 31%, and has started off at 30% this year. While hes shooting an outstanding 87% from the free-throw line this year, his success clearly hasnt translated to long range yet, and his shot mechanics could use some work. He gets very little elevation on his shots, being an inch or two away from shooting flat footed at times, and he also has tendencies to fade away unnecessarily, while his arm often drifts to the right as well. Adding a more dangerous spot-up three-point shot to his arsenal will be crucial for his future success, be it in the NBA or more likely overseas.

Defensively, Matthews excels, showing excellent lateral quickness and length, assets he uses well by never giving up easy shots, staying in a low stance, and playing aggressive defense on his man. He closes out well on shots, keeps his hands up around the basket, sticks with his man on drives, and always shows great toughness and effort on this end of the floor.

Looking forward, Matthews appears to be an ideal candidate for the Portsmouth Invitational Tournament, where he could look to stand out in front of NBA decision-makers. Hell need to maintain his current production to really build some draft buzz, though, as in terms of skills and overall polish, he doesnt have one standout quality that he really excels with, something NBA scouts and executives usually look for in the later stages of the draft.
Read full article