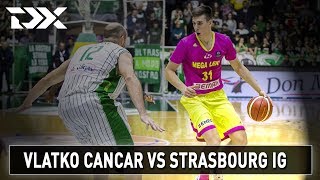 Yet another prospect from European super-agent Misko Raznatovic's stable of talent playing for his privately-run club, Mega Leks, Slovenian power forward Vlatko Cancar had a solid showing in his first year playing regular minutes against the caliber of competition his team faced in the Champions League, Adriatic League, and Serbian First Division.  Opting to keep his name in the 2017 NBA Draft, potentially after receiving assurances he'll be picked, Cancar ranks among the more intriguing young international prospects that figure to be available later in the draft.

A bit of a late bloomer, Cancar has long been a staple of the Slovenian junior national teams making his FIBA debut at the U16 Division B European Championship in 2013, but didn't emerge as a particularly notable talent until his breakout performance at the 2015 FIBA U18 Division B European Championship where he averaged 12 points and 5.3 rebounds over only 21 minutes per game, finishing fifth in the competition in PER.  Getting his first chance to play for the senior team of the club he grew up with, Union Olimpija Ljubljana, last season, Cancar saw sporadic minutes in the EuroCup and Adriatic League while playing much of the year on loan with LTH Castings Skofja Loka, a Slovenian club that doesn't play in an international competition.  Averaging 13.5 points, 5.3 rebounds, and 2 assists per game while shooting 43% from beyond the arc over 22 games in the Slovenian League, Cancar planted himself firmly on the NBA radar earning an invitation to the adidas Eurocamp and making his first appearance with the Slovenian senior National Team after a solid performance playing up at the 2016 FIBA U20 European Championship.

Making the jump to Mega Leks this season, Cancar carved out a significant niche in the team's frontcourt rotation, serving as a bit of an x-factor having a number of explosive offensive performances, amid many fairly quiet nights as well.

Last measured at the 2016 adidas Eurocamp, where he stood 6'8 in shoes with a 6'11 wingspan and a 210-pound frame, Cancar has decent size for a power forward to go along with a still lanky, but improving frame.  The Koper native appears to have grown a bit since then as his body began to turn the corner in his late teens.  Not overly quick, explosive or powerful athletically, Cancar is a long strider who can cover ground well in the open floor, and plays above the rim comfortably thanks to his length, even if he isn't likely to be the target of many lobs.

Offensively, the 20-year old has the making of a fine complementary scorer.  A capable set shooter who can spread the floor effectively, Cancar did his best work off the ball this season, but contributed in a variety of ways, filling lanes in transition, getting opportunities to create one-on-one, and getting involved on both sides of the pick and roll as a ball handler and roll man.

Cancar's best asset at this stage is his jump shooting potential.  After shooting the lights out from beyond the arc last season, he's connected on a serviceable 34% of his attempts this year, but 42% in true spot up situations.  A capable shooter off the dribble when given space, Cancar's lower overall mark is rooted in his still developing pull-up game and his shot selection than his actual ability to spread the floor.  Cancar is not a chucker by any means, and makes some very impressive shots bounce off the catch and off the bounce, but he's still feeling out his increased role in his first season playing against high level competition on a regular basis, on a team that needed him to carry a bigger scoring load than he was perhaps comfortable.

Though Cancar doesn't shoot a great percentage off the bounce, and is very turnover prone in transition and operating on the pick and roll, lacking much polish as a ball handler, he does show some promise attacking closeouts.  Very fluid and quite coordinated with the ball, Cancar isn't going to blow by anyone off the dribble, but can take what the defense gives him both in the midrange and around the basket where he can play above the rim with a head of steam.  Finishing an opportunistic 65% of his shots around the rim in the half court, Cancar doesn't force many drives, and picks and chooses his spots well.

An unselfish passer with a positive assist-to-turnover ratio in the half court, Cancar does some little things as well, making timely plays off the offensive glass and getting out on the break in transition, showing a strong feel for the game.  Even if his skill set has plenty of room to grow, the role-player potential is there for him to grow into a useful pro down the road.

Defensively, Cancar lacks great strength and quickness, but his combination of effort and length help make up for that to some extent when he's guarding his position.  The 1997-born standout plays with a competitive streak and is a factor in the passing lanes, even if he doesn't always have the burst to keep up with smaller players on the perimeter, and needs to get stronger to compete at the NBA level.

Playing a number of different positions this season as a spot starter and key reserve for Mega Leks, Vlatko Cancar comported himself nicely in his first taste in a major role against high-level competition.  Opting to stay in the 2017 NBA Draft, it wouldn't be at all surprising to see Cancar hear his name called in the second round, as his ability to grow into a versatile floor spacer and solid positional defender combined with his size make him one of the more interesting international power forward prospects in this draft.
Read full article

DraftExpress
@DraftExpress
-Vlatko Cancar is an intriguing prospect to track given his combination of size, length, and frame, along with his simple, yet effective, offensive approach. At 6' 8 in shoes with a 6' 11 wingspan, a 9' 0 standing reach, wide shoulders, and strong legs, the 19-year-old Slovenian has a nice physical profile for a combo forward. While he's not all that athletic in terms of vertical explosiveness and burst, he has solid lateral quickness and moves fluidly.

Coming off of a strong season in the Slovenian League, Cancar didn't have a huge Eurocamp in terms of production, but he showed that he has a projectable skill set for a role player. Most of Cancar's offensive game centers around his jumper, which displays soft touch and sound shooting mechanics out to the 3-point line, where he shot over 40% last season, even if the trajectory is a bit flat. The Koper-Cadistria native possesses a strong feel for the game and rarely plays outside of himself. He can attack a closeout with some fluidity, although he doesn't have much off the dribble game at this stage. Cancar lacks the elite burst to beat wings off the dribble, and can be a bit passive in his approach. He'll also have to continue to develop more ways to finish over length at the rim given his average explosiveness.

Defensively, Cancar has some tools to work with. He's long and has solid feet in spurts, but when out on an island he struggles a bit to keep quicker wings in front. His offensive passivity also translates to the defensive end at times, where he's not overly physical and could use a bit more toughness on the glass. Cancar has some limitations, but at 19 years old, his physical tools along with his shooting and role player potential make him worth following as he continues to progress within the Olimpija Ljubljana system.
Read full article