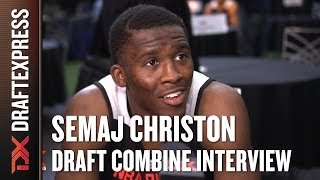 Christon, a second round pick in 2014 has yet to play a game in the NBA after spending his rookie year out of college with the OKC Blue, and last season with Pesaro in Italy. At 6'3, Christon has good size, length and athleticism for the Point Guard position, and is at his best using his physical tools to get into the paint or finish at the rim in transition. Christon finds ways to score the ball as he finished 4th in Orlando in scoring at 16.8 points per game, but his outside shot continues to struggle, having shot only 24-111 from deep over his two year pro career, which allows defenses to sag off him and protect the paint. He uses his size and length well on the defensive end both on and off the ball, showing good instincts getting into the passing lanes. Christon's solid performance in Orlando earned him an invite to OKC vet camp where he will have another shot at making an NBA roster.
Read full article


One of the top performers at this event, Xavier commit Semaj Christon (Unranked ESPN, #57 Scout, #72 Rivals) made a definite statement with his play at the National Prep Showcase, indicating he might be a little better he's been given credit for thus far.

Standing 6-2, with long arms, a good frame and very nice athleticism, Christon fits the bill for what scouts look for in a point guard from a physical standpoint and then some.

Christon can create his own shot effectively thanks to his solid ball-handling skills and excellent quickness, being especially impressive in transition, where he can finish above the rim. He does a good job of creating high percentage shots for himself as well as his teammates, usually in the form of drive and dish plays. He can get a bit wild at times with his decision making in the half-court, though, as its clear his knowledge of the game and all-around playmaking skills are still in need of refinement. At this stage Christon appears to be more of a slasher than a shooter, as we did not see him attempt many perimeter jumpers at this tournament.

Defensively, Christon has excellent potential thanks to his physical attributes and the toughness he displays, which will fit in nicely with the way Xavier likes to play. He should be able to defend either guard position at the NCAA level, which is a big plus.

All in all, Christon appears to be a very talented guard who will fit in very well at Xavier. It remains to be seen how quickly he will be able to take the reigns as their primary ball-handler and playmaker, as he's still a little rough around the edges, but is definitely a prospect to keep an eye on for the future, especially once he mans the point guard position for them full time.
Read full article