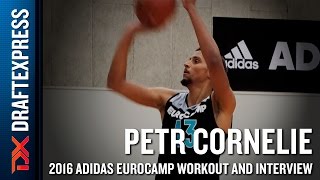 Mike Schmitz
@Mike_Schmitz
Projected 2016 NBA Draft pick Petr Cornelie took the floor in both the morning and evening sessions, with mixed results. The slender 6' 11 Frenchman played with high intensity during early morning drills and five on five play, using his athleticism to fly around on both ends of the court. Cornelie's impressive fluidity and solid leaping ability in space allowed him to crash the glass for offensive rebounds and recover swiftly to block shots while displaying sharp timing.

His outside shot, however, betrayed him a bit early in the day, a trend that carried into the evening game as well. Showing stretch potential all season long in Le Mans by way of 40% from three on 103 attempts, Cornelie struggled to command his three ball as he didn't get consistent rotation and regularly finished with a follow through bending to his left rather than toward the rim. The 20-year-old Le Mans big man was, however, able to show some natural touch around the rim, a projectable stroke, and the ability to attack a closeout on occasion, which is impressive for his size even if he wasn't always able to convert.

While Cornelie's combination of height, fluidity and offensive upside stood out, he had some struggles in the evening game against the USA Select Team. Sporting a narrow frame at 216 pounds, Cornelie tended to shy away from the physicality of a much younger USA team full of mostly 1998 and 1999 born players. With his jump shot not falling, Cornelie didn't quite do enough else as an interior defender and rebounder to bring a ton of value to the floor. He did move the ball effectively in the half court with a few nice high low passes, and made his presence felt late by flying in from the perimeter for put backs. But all in all his lack of strength and grit on the interior, along with his average length, limited his effectiveness. Cornelie did make an effort to step out and switch ball screens as he sat down in a stance and proved fairly light on his feet. Cornelie still has room to improve his lateral foot speed, however, as he's more mobile in a straight line and relies more on recovering to alter shots than keeping the ball contained.

Despite some of Cornelie's struggles on Saturday he's still an intriguing prospect because of his blend of tools and skills. The Calais, France native most certainly isn't the first NBA prospect to turn in a mediocre day at Eurocamp, and it's important for scouts and talent evaluators not to put too much stock in a few hours of competition with players he's never played with before. Corenlie most certainly still has some serious intrigue in the early second round of the 2016 NBA Draft, but on Saturday he showed his warts.
Read full article

European Dispatch: Getting to Know Le Mans' trio of 7-footers

Jonathan Givony
@DraftExpress
Petr Cornelie  Standing 7-feet ½ without shoes, with a 7'1 wingspan, Cornelie is a smooth athlete who moves fluidly and plays above the rim with ease. He's a stretch 4-man in his words who possesses a beautiful jump-shot complete with a high release point and a very natural touch, shooting 40% from beyond the arc this season. Cornelie has made major strides with his approach to the game this year, and looked like a veteran in the pro game we took in, scoring 14 points and grabbing 5 rebounds in 14 foul plagued minutes of action. He plays with great confidence and maturity in a tough and physical league, and although he struggles with the lack of bulk he possesses relative to the older players he faces, he shows great potential defensively on the perimeter thanks to his quick feet and ability to switch on ball screens. Finally, he draws rave reviews for his personality from everyone that has been around him, and came off as being highly engaging and possibly the best interview we conducted from the many players we spoke with on this trip.


Mike Schmitz is the video analyst for DraftExpress. Follow him on twitter and check out the DraftExpress Video section. He will be breaking down the NBA draft in digital format all year long for us.
Read full article

Jonathan Givony
@DraftExpress
One of the most intriguing players on the French U20 team so far this weekend in competitive action has been Petr Cornelie. A 6'10 power forward who played essentially the entire year for Le Mans at the LNB Espoirs level where he averaged 12.3 points and 9 rebounds per-game. Cornelie is a stretch big man who presents an obvious matchup problem with his size and shooting ability. Possessing fine shooting mechanics, a long, lanky frame, and a good motor, the 18 year old Calais-native has interesting potential.

He looked comfortable today hedging and recovering when defending the pick and roll, and has nice athleticism to complement his much improved offensive skill level. Though he's untested at the senior level, Cornelie is a player scouts will be keeping tabs on as he continues to develop.
Read full article