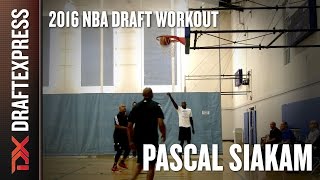 New Mexico State's Pascal Siakam discovered the game of basketball relatively late, as he grew up playing soccer in Cameroon, despite being the youngest of four brothers to play Division I basketball. A lightly recruited player after moving to Dallas with few, if any, other college offers outside New Mexico State, Siakam arrived in Las Cruces at just 190 pounds and elected to redshirt to work on his body and skills. All things considered, it is extremely impressive to see the way Siakam has improved, as he's been able to put his name on NBA Draft radars after just two seasons of play.

A 6'10 power forward with an imposing 7'3 wingspan, Siakam has several physical tools that give him a solid foundation as a draft prospect. In addition to his measurables, he has a motor that rarely stops along with great speed and agility to boot that allows him to move around the court with ease. He does have a thin frame, both in his upper and lower body, weighing just 227 pounds at the NBA Combine, and he will need to work on filling out his body and becoming stronger to compete with NBA players on a nightly basis.

Not a highly skilled offensive player, Siakam relies mainly on his length, athleticism and motor to get easy points around the rim. He converts 62.2% of his shots at the rim according to Synergy Sports Technology with many of these attempts coming from the shot creation of his teammates. He doesn't have great explosiveness off the ground but with his length, he doesn't need to get that high to dunk offensive rebounds or dump-off passes and he can utilize his open court speed to finish his rim runs in transition by being the first player down the court.

Where Siakam can make some strides in his own shot creation, starting from the mid-range and then extending to the three point line. He's not much of a jump shooter yet, attempting just fifteen three point attempts last season. He did have a larger sample from the mid-range but his mechanics are inconsistent and need to be tweaked before he turns into a threat as a shooter. He does have solid touch and looks to be in the process of cleaning up his mechanics, so it's not out of the realm of possibility that he continues to improve in this area.

Siakam displays some potential to attack off the dribble that could eventually complement a reliable jump shot, preferring to work from the center of the court toward his right hand. It usually ends in a floater or an awkward off balance leaning jumper rather than a layup or restricted area shot attempt. With his reach these shots are not easily contested by the defense but he has to improve his touch in the paint or find a way to get all the way to the rim to finish his drives with a bucket. Adding these skills will also help him become a pick and roll threat as he could dive to the rim with his quickness, step out for a jumper or be able to attack from inside the arc all the way to the rim.

He doesn't hold the ball for a long time and makes quick decisions whether to attack or pass but his passes don't usually lead directly to scoring opportunities as he had a relatively average 1.8 assists per 40 minutes pace adjusted. As he becomes more comfortable creating his own shot, he'll also need to improve upon creating good looks for his teammates. He will also want to learn to move the ball within the flow of the offense instead of just passing it back to where it came from if he doesn't have a clear shot attempt.

Siakam's 13.7 total rebounds per 40 pace adjusted ranks fifth among power forwards in our top 100, but where he really makes his mark is on the offensive glass with his 4.6 offensive rebounds per 40 minutes pace adjusted ranking fifth among all prospects in our top 100. He crashes the glass relentlessly, shedding his man on his way to chasing down loose balls anywhere on the court.

He is a competent defensive rebounder as well by pulling down 9.1 defensive rebounds per 40 minutes pace adjusted. He boxes out his man and has a decent nose for the ball coming off his rim, but has to expend so much energy holding off his man with his below average strength that he can't quickly disengage from his man and attack the rebound all the time to be a dominant rebounder. He will certainly be asked to fill a role as a rebounder and with his energy, length and aggressiveness, he is often the first to the loose ball and will be able to help finish possessions.

We didn't get to see much of Siakam's individual defensive skills because he spent much of his time sitting back in a zone defense during the regular season, but he did show some promise in the times spent in man defense. He certainly possesses most of the physical tools needed to guard the perimeter although his frame will once again be a question mark, and will need improving to hold his position on dribble penetration. He'll have to prove that he can be a fundamental team defender who is able to move his feet and switch onto multiple positions on the perimeter, a necessary skill for all power forwards and something we don't have a large sample size of against strong offensive players.

He flew around the floor to block 2.6 shots per 40 minutes pace adjusted as a sophomore by rotating over to the front of the rim from his position in the zone or flying at shooters on the perimeter. While he may find it difficult to replicate these numbers against NBA players, he's showed that he can be a high energy defender who will challenge every shot that is within his reach. His intensity level, length and above average basketball IQ bodes well for his future on this end of the floor.

Siakam doesn't have a large catalog playing against NBA caliber players with just one game against a major conference team in Baylor where he put up an impressive 26 points and 10 rebounds. He was also very productive in the NBA combine scrimmages, averaging 17.7 points and 15.5 rebounds per 40 minutes. Having not played the game for that long and playing his college seasons in a smaller conference, it was important for Siakam to show he can translate his production against his peers at his position, and he certainly seemed to do that at the NBA Combine.

Although he is already 22, Siakam can be expected to improve and add to his skills as he grows more comfortable on the court and develops more of a feel for the game with added experience. A team drafting him will hope they can utilize his athletic tools and non-stop energy to fulfill some key roles that may be missing from their roster while at the same time developing other parts of his game to round out his skill set and make him a more complete and impactful player.
Read full article

Jim Hlavac
@DraftExpress
We joined Pascal Siakam, from Cameroon, as he worked out in Los Angeles in preparation for the 2016 NBA Draft, and discussed a number of topics with him, including his season at New Mexico State, what he's trying to improve on in the short-term and what he feels he can bring to a NBA team.
More DX Workout Videos
-Skal Labissiere
-Robert Carter
Read full article

Productive 22-year-old sophomore Pascal Siakam stood out during Thursday's game thanks to his non-stop motor, rim running ability and excellent mobility. He's not the most offensively polished prospect in attendance, but Siakam competes on every play, a useful skill when coupled with his 7' 3 wingspan, fairly quick (although not overly explosive) leaping ability, and agility. He's the first one down the floor on nearly every possession, which resulted in a few transition buckets, including an And 1 finish that came after sprinting out to run Jarrod Uthoff off of the 3-point line and then recovering to block his jumper (one of three blocks on the game). Siakam also showed impressive footwork defending the perimeter and ball screens, something he wasn't always asked to do at New Mexico State as the Aggies played quite a bit of zone.

Siakam, who has a decent feel for who he is as a player, knocked down a short corner jumper and two of his three free throw attempts, but he still room to polish his skill set. He missed a face-up 17 footer, and botched a couple of finishes around the rim versus length. Siakam isn't the most physically imposing player at 227 pounds, but his compete level, energy, rim running ability, length and agility make him an very solid second-round prospect if he decides to stay in the draft.
Read full article

Mike Schmitz
@Mike_Schmitz
New Mexico State big man Pascal Siakam ranks among the most productive players in college basketball, averaging 27.0 points (57% 2P%), 13.6 rebounds, and 2.1 blocks per-40 minutes, while posting a 32.8 PER. From a player standing 6'9, with strong athleticism, a very long wingspan and an excellent work ethic, that has to be taken seriously. But with a strength of schedule ranked just 295th according to KenPom, NBA scouts have had painfully few opportunities to evaluate him against quality competition.

Last night New Mexico State played against Baylor, a team that finally featured some real size and athleticism, which prompted 15 NBA teams to send representatives to Waco to scout the game. While the Aggies trailed by double digits for almost the entire contest, and it is difficult to draw too many long term conclusions off this contest alone, this at least gave us some better film to work with in breaking down Siakam's strengths and weaknesses.

Via Mike Schmitz, here's a five minute video breakdown of some of the more notable things NBA scouts were able to see last night, both good and bad, on either end of the floor.