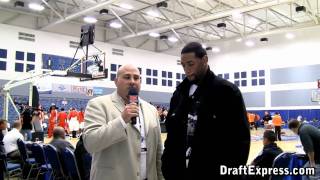 Strengths
An extremely unique prospect in this draft, one of a kind in terms of the size, skills, athleticism and talent he possesses at his position.

Greene is a 6-5 pass-first PG with outstanding athletic ability, a great wingspan and fantastic skills on the defensive end. His physical attributes alone should get him quite a few looks, as he is built extremely well and has all the size, strength and length you could ask for from a player at his position.

Greene has been playing the PG position his entire life except for his two seasons in Gainesville and appears to have very good instincts at the position. He played for probably the best mid-major team you never heard of or saw on TV, a superb group of talented athletes that came very close to knocking off a Final Four team in Louisville in the NCAA tournament. Watching him play it's hard not to think what a talent he is, and you have to wonder what might have been had things fallen his way in the luck department since he graduated from high school. Those who followed high school basketball 5-6 years ago will remember that Greene was considered one of the most talented players in the nation at his position (a top 30 recruit) and was named Mr. Basketball in the state of Florida after putting up one of the most impressive senior years of any Florida player in years, helping to lead a no-name team from Gainesville to back to back state titles.

Defensively is where he excels the most right now, and he was named the Sun Belt defensive player of the year two years in a row to back that up, despite playing on one leg for most of the last season. His lateral movement is superb and his hands are excellent, he can guard both the 1 and the 2 positions and has the ability to stay in front of pretty much any PG in the country. He has an uncanny knack for anticipating steals and getting in the passing lanes, and has been on the right end of numerous breakaways to finish with an emphatic dunk thanks to this skill. Greene is excellent at putting pressure on the ball, and is very good at sticking his hand in just the right spot to pick his opponent's pocket and come up with the steal. He has no problem getting dirty to help out his team, and will put his body in the right place to draw the offensive foul. He is an excellent rebounder for his position, averaging close to 5 rebounds per game

In terms of his playmaking skills, he is as mentioned an extremely unselfish, pass-first PG. His court vision is above average (better than his best NBA comparison--Keyon Dooling), and certainly good enough to get by as a backup on most NBA teams. He is good at putting the ball where his teammates like it, knows how to find the open man, and is probably at his best when he is making the simple, but efficient bounce pass for an easy lay-up. His ability to get in the lane make him a very good drive and dish threat. In transition is where Greene really excels. He has very good speed in the open court, and shows much better decision making skills than in the half-court, where he is still a bit rough around the edges. He plays on a team that loves to get up and down the floor, and when Greene is focused (on) and playing within himself, he can push the tempo and his team can run with the best of them.

Offensively, he can create his own shot, although he has a tendency to get ahead of himself and try to do a little too much. His shooting is probably better than his numbers would indicate--he is by no means a great shooter--but he can knock down the open three if you give him space. He is more of a rhythm shooter, I've seen him knock down threes from close to NBA range during games, but he has a long ways to go in this area despite being adequate on the catch and shoot. He can pull-up from mid-range off the dribble or use his size to post up his man and muscle his way to the hoop, a nice skill to have considering that he'll always be bigger and stronger than his matchup at any level he plays at.

Basketball is clearly something that is in Greene's blood, as he's been playing the game from a very young age. He is very smart without the ball and really knows how to pick his spots. Thanks to his outstanding athletic ability, he is excellent at making good sharp cuts towards the basket and he changes directions quickly. He's an extremely fluid athlete with good quickness, a very nice first step and a terrific vertical leap. Once his ball-handling gets a little better, he'll most likely be exceptionally quick with the ball in his hands as well, as he is already very quick without it.

Off the court, despite the hardships he has been through, he is described by his coaching staff at Lafayette as a quiet kid and solid citizen with an outstanding attitude who is well respected by his teammates.

Once you get outside of the top 5 PG's (Paul, Felton, D-Williams, Jarrett Jack, Roko Leni-Ukic) he has about as much upside as any of the PG's in this draft.

Weaknesses
Probably his biggest weaknesses and something that he will have to get better at if he is going to have any chance of being drafted is his outside shot. His mechanics need work, as his left elbow flails out to the side every time he spots up (think of Josh Childress, although it's his left elbow, not his right, and it isn't quite as pronounced). He shot a poor percentage from both the field (39%) and from behind the arc (32.4%) although he was actually quite respectable the year before that (45% and 36%).

What's most likely the biggest reason for that is the fact that Greene is still quite a raw player in many facets of the game despite his age (he recently turned 23). He has a tendency to force the issue at times, as his assist to turnover ratio (4.0 to 3.3) would attest. He is often out of control driving to the hoop, forcing his way to the basket and struggling to make good decisions with the ball in his hands, especially in terms of his shot selection. At times Greene appears to have an outstanding feel for the game, and then on the next possession he will make a bone-headed move that will make you scratch your head (Florida fans have yet to forgive him for failing to call a timeout and getting called for a five second call on an inbounds play in the last minute of double overtime in their eventual loss to Creighton in the 2002 NCAA tournament). Consistency is a major issue for Orien, he has problems maintaining his focus mentally over a span of 40 minutes, especially when fatigue is involved. This was a bigger issue (fatigue) than it should have been, as Lafayette is not a deep team and Greene played for much of the season coming off a bad injury that would have held most players out for the entire year.

His ball-handling is good enough for the college level, but will have to get stronger to play the point in the NBA, as his handle is a bit loose at times.

In general Greene is a little rough around the edges in many aspects, but his age might turn off some NBA types.

Competition
Greene appeared to be on his way for a breakout season until he broke his leg when his team went to play Kansas on the road. He decided to rush himself back and was back on the court after sitting out one month and only 6 games, playing for the rest of the season at less than full strength. His team won 14 of their last 17 games after he returned, and made the NCAA tournament for the third straight year, Greene's fourth trip in his four years (with two different teams) to the Big Dance. In the tournament itself Greene was a complete non-factor because of foul trouble. He got called for three questionable offensive fouls, and ended up only playing 18 minutes in that game.

Greene played his basketball in the Sun-Belt conference, a mid tier mid-major conference whose best teams beside Lafayette include Denver (home of another prospect you'll be hearing a lot about next year, Yemi Nicholson), Arkansas Little Rock (Derek Fisher's alma matter) and Western Kentucky. Lafayette went 11-4 in this conference and absolutely destroyed anyone who stood in their way in their conference tournament (winning their three games by a combined 44 points) while clinching a spot in the NCAA tournament.

Greene sat out the 2002-2003 season after transferring from the University of Florida.

Was recruited by Billy Donovan to play at the University of Florida and spent his first two seasons in college there. His father was facing major legal issues (to say the least) and Greene struggled in the classroom before eventually transferring to Lafayette. His two seasons at Florida will not be remembered as anything that special. He was played at the SF position (Brett Nelson and Justin Hamilton both got the nods at the two guard spots because of seniority) and failed to make a huge impact for his team while playing out of position, despite starting for Florida in every game his sophomore year.

Outlook
Automatically eligible as a graduating senior. A 2nd round pick at best, with a more than decent shot at going undrafted. Really depends on how he does in workouts, how he positions himself in this draft, and whether or not players will be willing to work out against him.

Comments
Everybody has their favorite sleeper prospects in the draft, and I may have just found one of mine, thanks to the coaching staff at Louisiana Lafayette, who made sure to provide me with all the tapes and info I needed to make sure he gets a look (nudge nudge mid-major schools for next year). Whether or not he will get a shot to make the league is anyone's guess, but I could see a quiet buzz developing around Orien once he starts working out for teams and showing off his unique package of skills and considerable upside. Matt Bonner and Udonis Haslem (two former Florida Gators who had to take a back route into the league and are now on their way to big NBA paydays) have both been quoted saying that Greene was by far the best player on the court every time they played a pickup game together. Whether or not that will be enough to get him invited to Chicago (where I personally think he could do extremely well) is anyone's guess. He's at least good enough to get some summer league looks, so hopefully this is not the last time we hear about him. NBA teams could probably do a lot worse drafting late in the 2nd round. He has some skills that are reminiscint of Marquis Daniels when he was at Auburn.
Read full article

Jonathan Givony
@DraftExpress
Greene is a big PG with an excellent wingpsan and athletic ability that has been slowly improving his PG skills since transferring to La Lafayette from Florida. He is one of the best defenders in the country and has been drawing comparisons to Keyon Dooling with his play this year. He'll have a great chance to show off his playmaking skills, and if he can do a good job along with hitting the outside shot (a major weakness of his) he has a good chance to put himself firmly on the radar for this upcoming draft.
Read full article